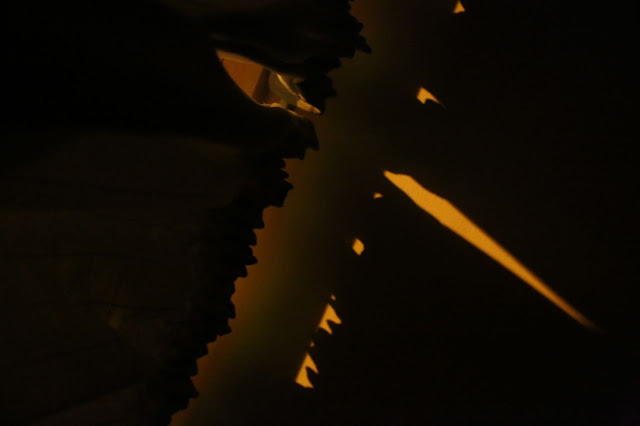 The Thinking Atheist is one of my faves on FB. Rational and wise, in the midst of the crazy religious right that seems to have hy-jacked this nation. When we come to grips with intelligence and abolish religion as a guiding of contrived rules, education, maths and science are key. Art and music- a given.
Buddhism is Ok, in that they leave you alone and have compassion that no other religion has.Not all buddhists, however, are compassionate... just people trying to find more to this life than is. We are biological mistakes, I reckon. No reason to be jerks about it, we just are and it just is and when we die we are dead.. Love Sam Harris's series online "grooveshark" can get you there.
Your photo is clearly a shark who swallowed a lantern.

I was trying to figure out that photo from the get-go. But I must admit I have no clue. Something with fire or flame in it? Is it oriented the right way or did you rotate it on its side? Still puzzled ...

Here where we live in NJ it's very Italian, so therefore VERY Catholic. I was brought up Catholic but the minute I left my parent's house that was that. I washed my hands of the whole thing! Now? Nothing!

It's not uncommon to see a nun in our grocery store in her habit and stout shoes. Weird.

I have no idea what that photo is. The spear that those guards hold at the Queen's house?

As for Buddhism, sometimes I think it's the only way to think and not go insane.

The photo looks like an off-kilter shot of curtains in a dark room. The shards of light on the right are light on the ceiling, trickling over the top and through the "seam" of the closed curtains.

(So I guess the shot is both upside down and cockeyed. Shot while lying on a hotel bed, perhaps?)

Lorianne, you are spot-on. I was lying in bed looking up at the ceiling of my dark room, where the streetlight was coming in over the top of the curtains. Good call!

Good on Lorianne! At least I kind of sort of had the orientation part right! ;) Tricky photo!

Clearly that's a photo only another shadow-obsessed, off-kilter photographer could recognize. :-)

I'm not an atheist exactly but I don't believe in religion, any religion. And I get really offended when religion claims the moral high ground, that it if weren't for religion and god we would revert to animals. but ya know, animals have more decency than many humans. I don't think we need a god to tell us that murder is wrong, that theft brings discord to society, that it is a good thing to care for the less fortunate. I think we know these things innately.