The New York Times had an article Thursday about strip clubs in my hometown, Tampa, gearing up for the Republican National Convention. Apparently Republicans spend nearly three times as much at strip clubs during their conventions as Democrats do at theirs -- at least, according to the rather loose research cited by the Times. Somehow I'm not surprised. Aren't Republicans wealthier?

Anyway, one line of the article said, "Tampa cannot shed its national reputation as the strip club capital of the country." To which I say, really?

It's true that Tampa was in the news periodically over the years as Joe Redner, an owner of several strip clubs, fought local government over regulation and free speech issues. But is Tampa really considered the national capital of stripping? I suspect that's quite an overstatement. 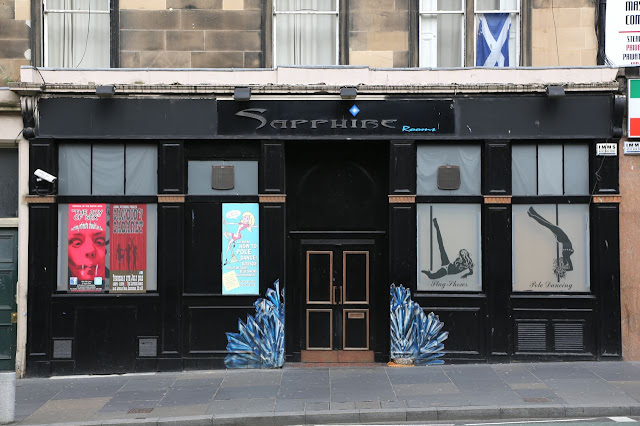 By way of example on an international level, here are two strip clubs I photographed on Lothian Road in Edinburgh. See? Even Scotland has its share of pole dancing and, according to the window on the Sapphire Rooms, "stag shows."

Still, overstatements aside, the Times article isn't bad. It quotes one dancer, who's saving her money for nursing school, vowing to discuss her economic travails with her convention clients. You go, girl!
Posted by Steve Reed at 7:24 AM

I do not know if it’s just me or if everybody else encountering issues with your site. It seems like some of the text in your content are running off the screen. Can someone else please provide feedback and let me know if this is happening to them as well? This might be a problem with my browser because I’ve had this happen previously. Cheers

Oh dear ... the Bottom's Up! Love it! I had never heard of Tampa being the capital of strip clubs.

When we make our cross-country drive to to Colorado each year I am always amazed by the number of billboards in the Chicago area that advertise "men's" clubs or "gentlemen's" clubs. It's weird because there are so many!

Many many strip clubs in Houston.

I'm not surprised that Republicans spend 3 times as much (do three times as many visit such establishments?), considering their attitude towards women as reflected by their politics.

to the first comment- never had a problem, must be your monitor.
Another interesting bit of slut info- for online buying of smutty porny delights- the majority of the orders are from UTAH! I am talking huge numbers...as Ellen said- "makes sense"...

There's even a strip club here, it's called South Fork. lol ... It's been there for at least 20 years. I never think of strip clubs when I think of Tampa, I think of you ; )
Wonderful post. xoxo.

Scottish strip clubs is a concept I had not thought of. When I was growing up in Oklahoma there was one called Walter Mitty's, and for years I thought the story was about strippers and was quite surprised when I finally read it.

÷News to me, but hardly surprising, and given republican politics, their attitudes towards women, strippers or not, is hardly progressive.

I'm happy to know that there are some women who will use the money made from pole dancing and stripping for loftier goals but it bothers me that women get paid more for taking their clothes off than they do for keeping them on and using their brains...

I've got nothing against strip clubs, but I'd be hard-pressed to dance for a Republican. It makes me chortle to think that the party of family values spends so much money being "entertained."

Thanks for the comments, everybody. It's encouraging that no one else thought of Tampa in that light, either. I was beginning to wonder if I'm just out to lunch.

You're right -- sexism and a backward attitude toward women among Republicans is not surprising. I didn't really think of that. I was thinking in strictly economic terms.

I'd like to think the dancers are exploiting their customers just as they are being exploited -- but of course it's not a relationship of equal power.