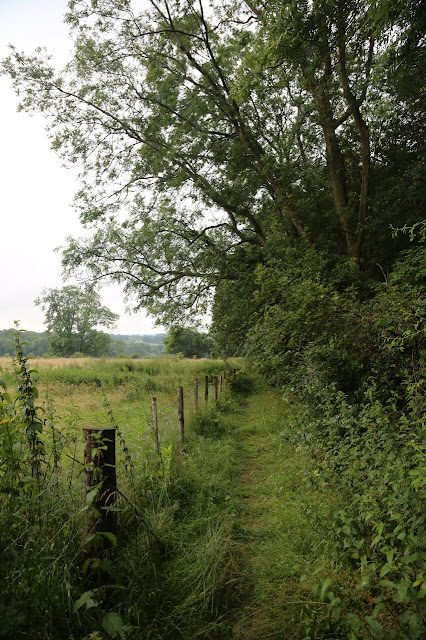 As I mentioned yesterday, I spent some time during my stay in Kent exploring the local walking trails. This sounds like a wonderful, peaceful way to enjoy the bucolic English countryside -- but only if the weather cooperates. Which, in this case, it didn't.

England, I am told, has a strong tradition of maintaining public walking paths that criss-cross towns, fields, back yards and farmland. Some of the paths date back to a time before private land ownership. In Kent, I chose to follow the High Weald Landscape Trail, which runs near the school where we stayed. 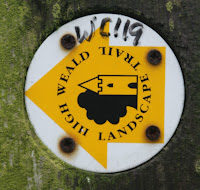 The first day we arrived, I set out in the evening and followed the trail in one direction, past the aforementioned cows, across a road and through fields that got increasingly dense with underbrush. I turned around when it began raining and the path looked like that top photo. I wasn't really dressed to swashbuckle my way through wet thistles and brambles. Besides, it was getting dark.

(That's a trail marker in the photo at right -- and no, it's not sideways. It's just saying the trail goes to the left.)

The next morning, I went in the other direction. 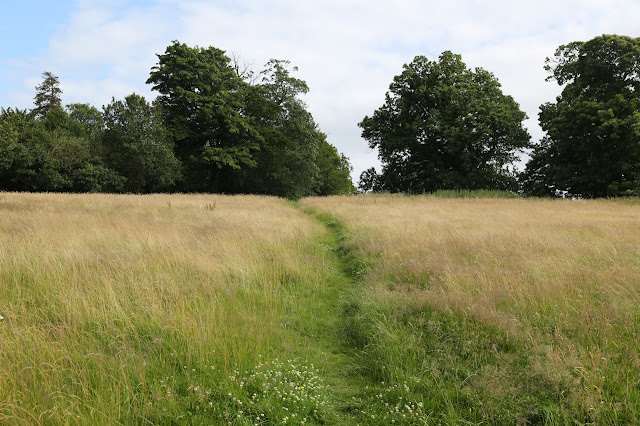 The path was promising at first, cutting across a field of tall grass and Queen Anne's lace. I met a woman and her ornery dog. ("He doesn't really like men," she said, as he barked furiously. I gave him a wide berth.) Otherwise, I was alone, marveling at the lack of mosquitoes that often make hiking in Florida such a drag.

I had a great time photographing bugs and flowers. Soon, though, the path ventured into the woods, where after days and weeks of rain, things took an ominous turn: 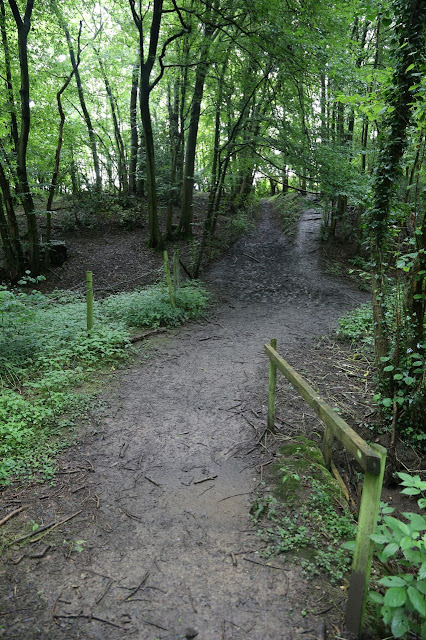 Holy mudbath, Batman! I negotiated this slippery slope as best I could in my Merrills, which I'd bought only a few weeks earlier. Lemme just say, I see now why British people wear "wellies." I trudged along, encrusted and shellacked around the ankles, until I came to a huge puddle sandwiched between two fences and could go no further. 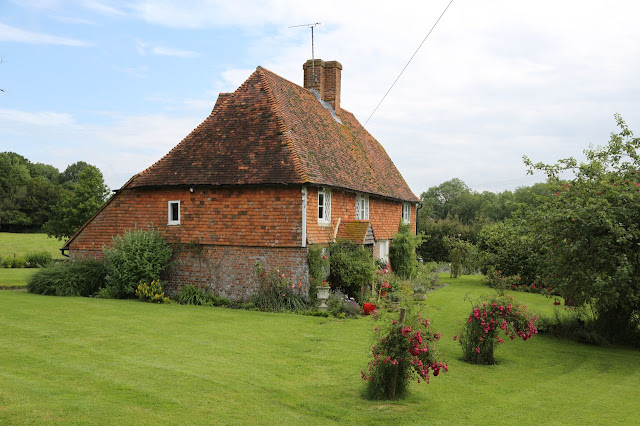 The puddle was right next to this house. Doesn't it look like something out of Hansel and Gretel? 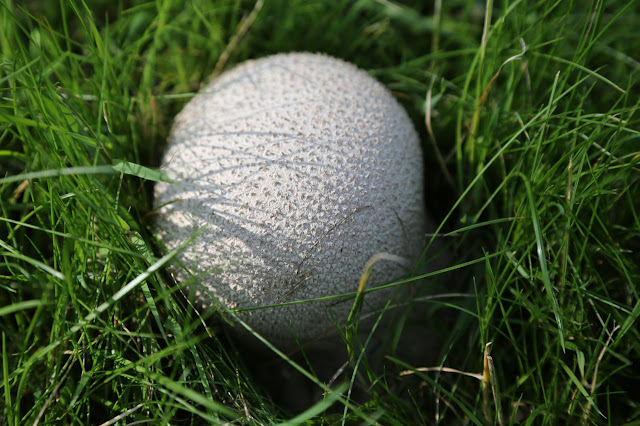 I turned around and made my way back to the school, just in time for it to begin pouring rain. Happily -- as I mentioned yesterday -- I was ultimately able to save my shoes.

Among the cool stuff I found along the trail, and on a later walk in the nearby Hemsted Forest, were mushrooms -- including the puffball mushroom above, nestled in the grass like a big lost golf ball. 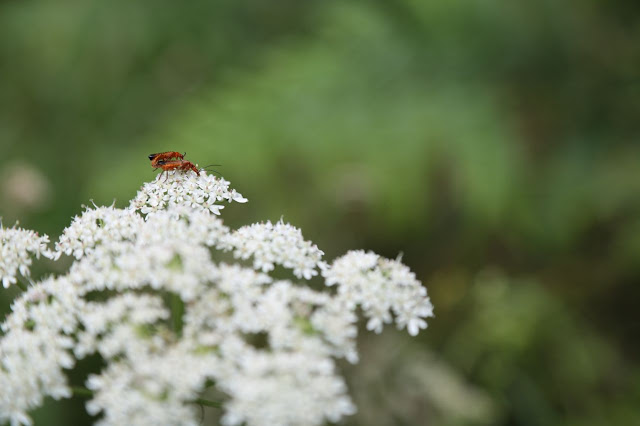 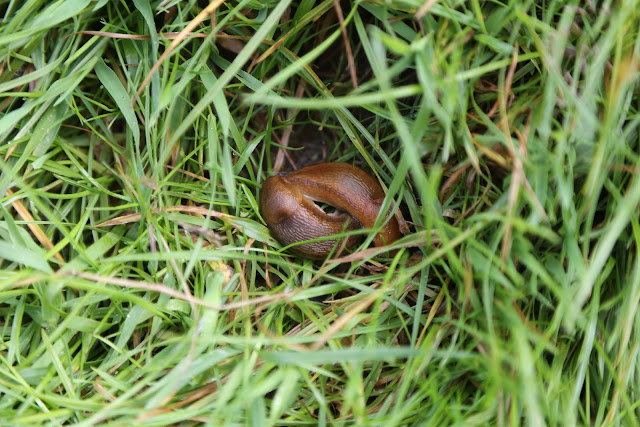 Love was in the air -- at least among insects and slugs. 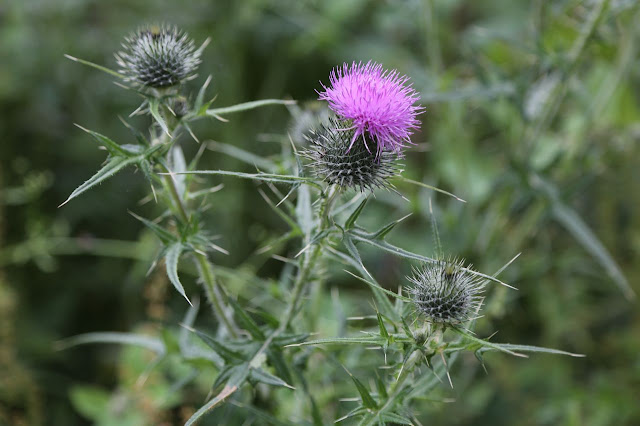 And wildflowers were everywhere -- like these thistles. I'll spare you my zillion photos of flowers -- at least here. They'll eventually be available on Flickr!
Posted by Steve Reed at 6:10 AM

Oh, my! Just what I needed with my morning cup of coffee--a good laugh! I so enjoyed your walk Steve! I wish I could have joined you, mud and all!

I think you need to invest in a pair of wellies if you're going to be going "cross-country" again.

You didn't encounter any stiles?

I could live in that quaint, charming house.

I have a memory of going on a hiking trail with friends after it had rained & sliding down a bank on my butt - I was FILTHY! But it was fun, actually, once I got over being embarrassed :)

I need to remember to check out your flicker page - I love flowers!

Lovely- looks like home. When I lived there I rarely took my wellies off. The little house is SOOO sweet! You should have invited yourself in...Dexter loves men and boys- if you ever come to the PNW he will not bark at you.

I want to stay in that little house in the green, green grass.

Love amongst the slugs. How sweet.

I love this. I love that England maintains these walking paths around the country.