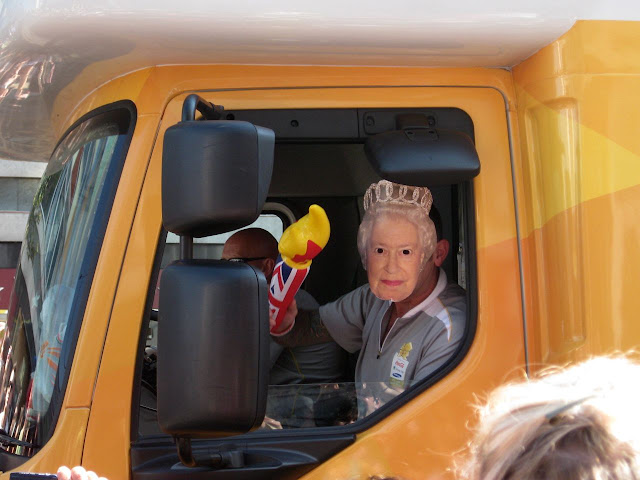 Yesterday Dave and I went with his parents to see the changing of the guard at Buckingham Palace. You know that David Foster Wallace book titled "A Supposedly Fun Thing I'll Never Do Again"? Well, that describes the changing of the guard. We knocked elbows with hordes of people beneath a broiling sun to get to a place near the palace fence where we could kind of see guys in red marching around, as a brass band played somewhat incongruous music like "We Are the Champions" by Queen. I'm just not into paramilitary showmanship. All I could think of was Monty Python marching up and down the square.

We walked back through Green Park and Hyde Park via the London 2012 Olympics shop, where Dave's parents blew some money on t-shirts for their grandchildren. They wanted to buy Dave and me t-shirts too, but Dave declined. He told them to buy him a nice French bottle of wine instead. I found a shirt featuring the Olympic mascots from years past, which is about as close to a sporting theme as I would ever wear. 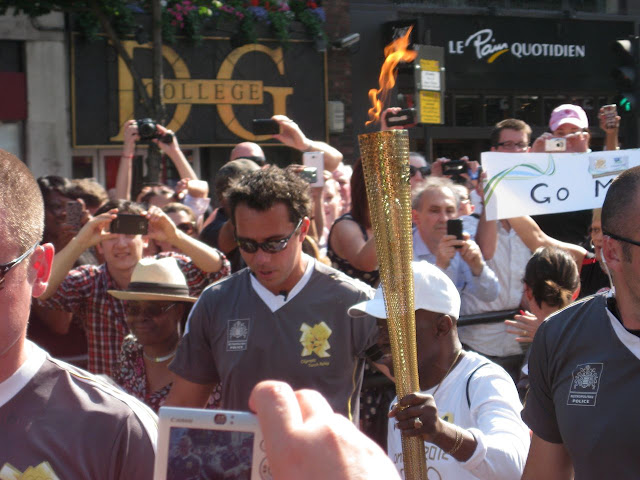 We took the tube from South Kensington, and lo and behold, when we emerged at Notting Hill Gate, thousands of people were lining the street, holding cameras ready. Some police officers told us the Olympic torch was about to pass by. And sure enough, within a few minutes, Mr. A came past, holding it aloft. (As you can see in the photo at top, the accompanying truck was driven by the Queen herself!) 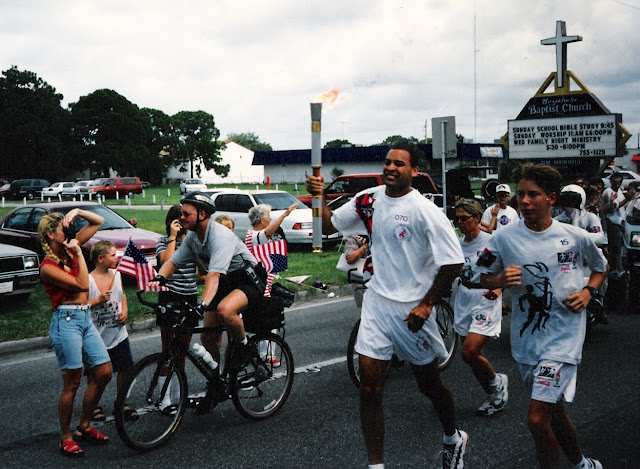 We marveled at our lucky timing, and I realized this was the second time I saw the torch. I also saw it in 1996, before the Atlanta games, when it passed through West Florida. Here's a photo from that day, when I stood with a friend and her now ex-husband beside the Tamiami Trail in Bradenton. I have no idea who that torch bearer is -- if I ever knew, I failed to write it down, and the best I could find on the Internet today was a list of the 1996 bearers from the Sarasota area. He must be one of them.

Today we'll watch the opening ceremonies from the comfort of our own living room. Probably with wine.
Posted by Steve Reed at 6:37 AM

In general, I do NOT like crowds. I get kind of pushy & bitchy in a crowd - probably because of low-level clautrophobia. Not fun!

On one of my many trips to London, I stumbled onto a little courtyard where the Queen's Guards were preparing for their march toward Buckingham Palace for the changing of the guard ceremony. It was more fun watching them practice and tune their intrucments than the actual ceremony was. I got some great close up shots of those guys that day.

Usually I say packaging is everything but in this case- timing is everything- Lucky. Glad you finally have some heat this summer- Still cold up here. And that is the way it is.

What luck! Such a funny photo with the guy in the Queenly mask!

Glad it's your city and not mine that is playing host to the Olympics! ;)

Oops, forgot that to add that anything goes better with wine. Especially the French wine that David's parents surely bought for you.