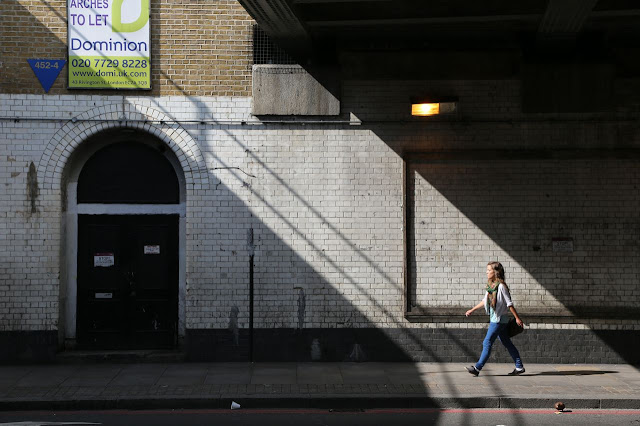 You may remember that when Jennifer and Jesse were here, we took a sightseeing tour around town on top of a double-decker bus. Now our friend Kellee is here from Michigan, and yesterday, another loop on the sightseeing bus was in order. This time Dave went, though -- as much as I love Kellee, I saw no point in paying £23 to see the same sights again.

That gave me a free day. I've been wanting to get back to Shoreditch, London's street art mecca, for a couple of months. So that's what I did, and it's a good thing, because there are about a million new pieces up this summer.

It's always a constantly changing scene, but I ran into a fellow photographer during my walk who said this year is busier than ever -- both for artists and observers. And indeed, I came across two street art walking tours, each with at least a dozen young people snapping away with iPhones.

It took me all afternoon to wind my way up Brick Lane and all the side streets, and mercifully it was sunny the whole time. I had a great afternoon. Maybe in rebellion against all those other people shooting street art, I took lots of other shots too, like the one above.

Coming home I stopped at the grocery store to buy ingredients for chicken pot pies. (Dave was impressed because I found pre-boned, skinless chicken thighs, eliminating the need for him to burn his fingers pulling hot chicken meat off bones.) While standing in line I chatted with an older woman who talked about London's weather and how strange it's been. "We have all four seasons in one day!" she said. Which is true.

Oh, and you may have surmised from my lack of a post about the Fourth of July that we didn't really do anything. To be honest, it was off my radar entirely. One of our (apparently American) neighbors set off fireworks on Wednesday night, and I watched them from our windows -- that's as close to celebrating as we got!
Posted by Steve Reed at 8:13 AM

American holidays are strange when you are not living in the U.S., aren't they? Thanksgiving was always the weirdest for us.

Were you happy with your street art photos?

Wouldn't celebrating the 4th in the UK be considered tasteless and rude?

Lynne: Yeah, Thanksgiving is strange, because it's such a major deal for Americans and no one else pays any attention. I am happy with the street art pics, some of which are sure to appear here in coming days!

JM: Nah. All that revolutionary stuff happened so long ago no one minds it now! In fact some bars and restaurants flew American flags on the Fourth.