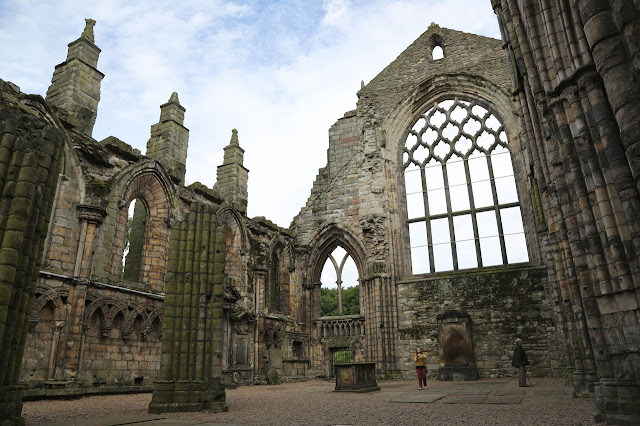 We planned our whole day yesterday around the weather forecast -- rain in the afternoon. We caught an open-top bus tour early in the morning to learn our way around the city, and rode up to the castle, which sits high on a rocky outcropping. After exploring there, we continued on the bus to Holyrood Palace, the home of royalty in Edinburgh.

That's where these photos were taken -- in the ruined abbey adjacent to the palace.  If I understood my trusty audioguide correctly, Its earliest parts date from the 1100s, and it collapsed sometime in the 1700s. 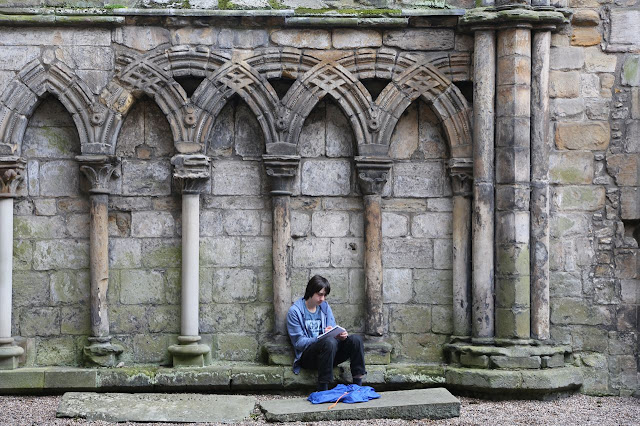 It was scenic enough for this kid to spend time sketching the ruins.

Inside the palace itself -- where photography is prohibited -- we stood in the bedroom of Mary, Queen of Scots, and saw the place where her secretary David Rizzio was murdered by her jealous husband. We also saw an elaborate chair made of "bog oak," or hard oak wood unearthed after spending a thousand years in a peat bog.

Then, in the afternoon, an unexpected bonus -- no rain! So I set out to photograph some storefronts and street art I saw from the bus, knowing that Dave and his parents would want no part of that expedition.

Last night, we had a terrific seafood meal in a very humid restaurant around the corner from our hotel. (Few places in Scotland, or England for that matter, are air conditioned, so things tend to get a bit close in the summer.)

This morning I had another phenomenal walk, so lots more photos are on the way! Our train back to London is at 2 p.m.
Posted by Steve Reed at 10:00 AM

I'm glad you had a day with no rain to go exploring :)

Steve, I visited here when I was in college. Our family went to the graduation of a dear young man who had earned an engineering degree from the University of Edinburgh. I have always remembered how beautiful the place is, how the green were the greens, how verdant. And we too had an amazing meal in Edinburgh after our day of sightseeing. You bring back good memories!

And to think, not so long ago (three years?) you were reporting to work daily on a narrow street in midtown Manhattan. How your life has expanded! Thank you for taking us along.

In spite of the no rain rarity, the stones look very cold and ominous- they are awesome that way. Anxious to see more !!!

Love the architectural detail in the photo with the sketchy guy. What craftsmen they were! Did you ever read Pillars of the Earth? This brings it all home.

So jealous of your adventures! How cool to hop on a train instead of a plane. Can't wait to see the rest of your photos.

Angella: It really is a beautiful city, and as you said, the greens are SO green. It's hard to believe the strange twists my life has taken!

Lynne: I never read Pillars of the Earth. Guess I should look it up! They were incredible craftsmen. A building with that much stonework would be impossible to build today. The expense would be outrageous.