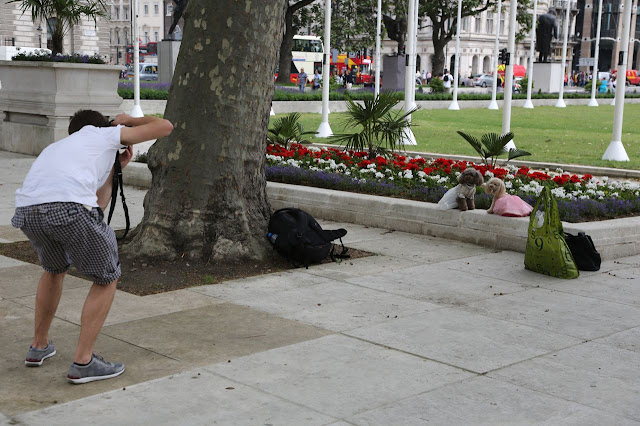 While Jennifer and Jesse visited Westminster Abbey last week, I sat out on Parliament Square and ate lunch, which I'd brought with me in a bag -- two peanut butter sandwiches with watercress. (Most people think it's very weird to eat peanut butter with a vegetable, but I think of peanut butter as a savory food -- just like peanut sauce is savory in Thai cooking -- so why adulterate it with something as disgusting as jelly?)

Anyway, while I was sitting there, a couple walked up with two tiny dogs in carrying bags. The woman unpacked the dogs and dressed them in absurd little tutus. She then deposited the dogs on the edge of a planter and the man began photographing them, with Big Ben towering in the background. 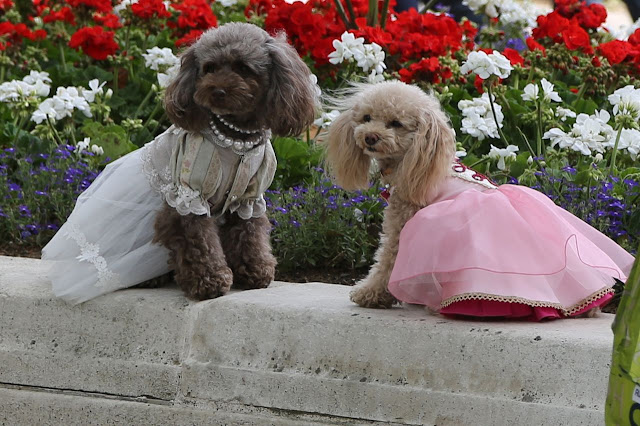 On second thought, I guess those aren't tutus. They're more like ball gowns.

Anyway, the dogs sat through this ordeal, posing with an air of weary resignation. They've clearly been through this many times. I couldn't resist whipping out my own camera.

To me it seems very weird. But then, I was eating a peanut butter and watercress sandwich, so who am I to criticize?
Posted by Steve Reed at 7:16 AM