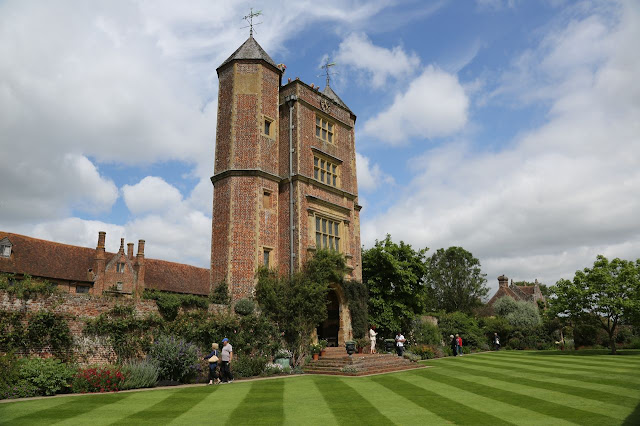 This is Sissinghurst Castle, one of my final stops during our stay in Kent. It consists of a couple of Tudor-era buildings and a few later structures, the remains of what used to be a much larger stately home with a courtyard. The home was used to house French prisoners during the Seven Years' War and then used as an almshouse for the poor, which left it in such a dilapidated state that it was eventually torn down. This is all that's left. 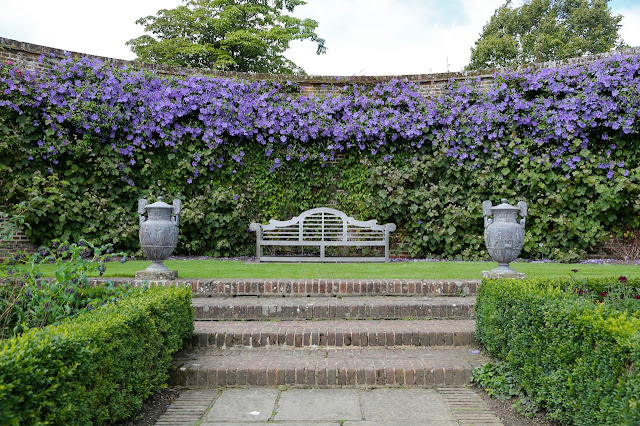 The grounds include incredible gardens, created by British writer Vita Sackville-West and her husband Harold Nicolson, who lived here from the 1930s onward. When they died, the house went to the National Trust, and it's now available for public visits. When I was there, it was abuzz with several busloads of German tourists.

I don't know much about Sackville-West, except that she and her set were notoriously sexually adventurous. She was pals with Virginia Woolf and the rest of the Bloomsbury Group. Her book-lined study is in the tall tower structure at Sissinghurst, and she and Nicolson converted a stable in the adjoining long building into a beautiful library. 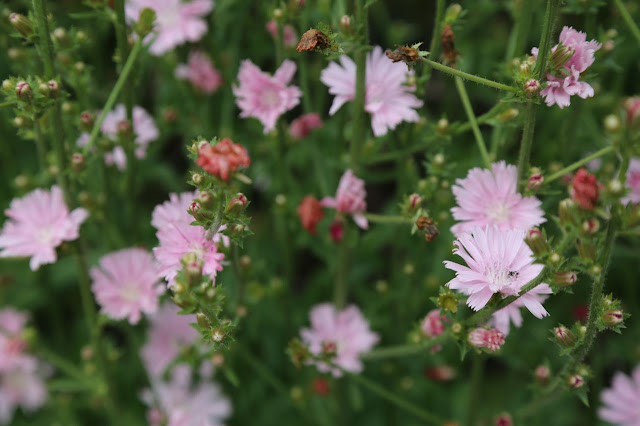 I took tons of photos in the gardens, which I'll put on Flickr. Included among the interesting plants was pink chicory -- something I'd never seen before. I'm more familiar with the blue variety. 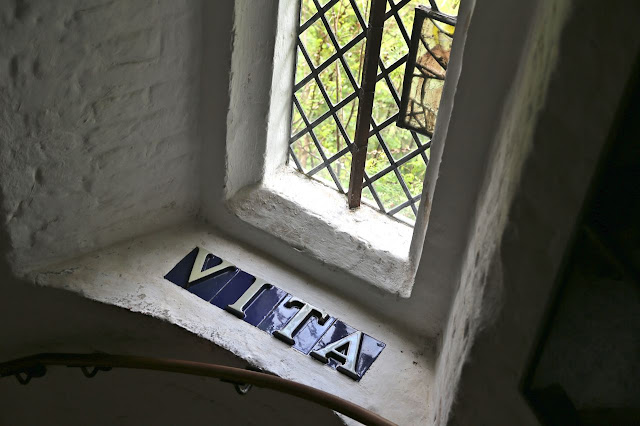 Visitors can climb the narrow, twisting staircase up the tower and view Sackville-West's study. Unfortunately, interior photography is not permitted -- but I snuck a picture of this windowsill on the stairs. After all, it's almost outside. 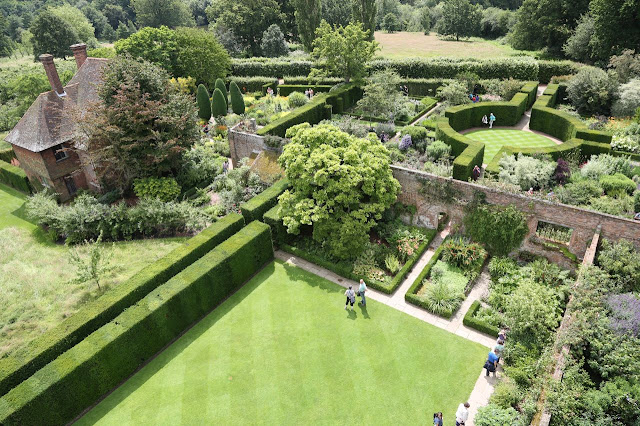 This is the view of the gardens from the roof of the tower. The gardens are grouped into planting areas based on color, and bounded at the far end by a moat that dates back to the Middle Ages.

As you can see, we actually had sunshine on this particular day! Believe me, that was unusual. 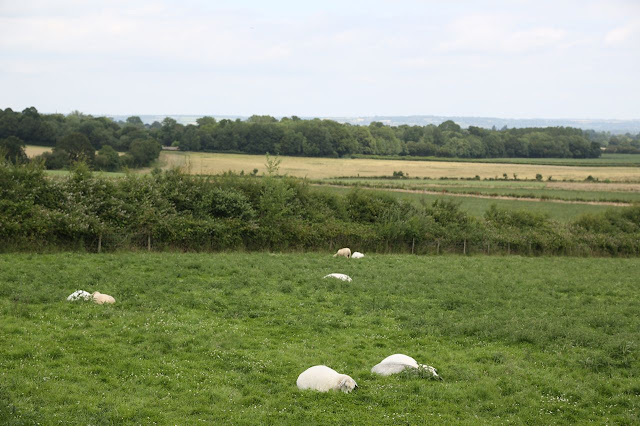 Aside from the gardens, there's an old barn, an oast house (once used to dry hops for beer-making, but now an exhibit space), a gift shop and restaurant, a plant shop and a cafe. I walked out behind the barn and found this field littered with big white blobs -- which turned out to be sheep! ("Surely they're not dead," I thought, and then they moved and twitched and one stood up. I had no idea sheep lie down when they sleep, but I suppose that makes sense.) Sissinghurst is on fairly high ground, with the countryside sprawling away in all directions.

Dave unfortunately couldn't go with me to Sissinghurst, because he was working that morning. But he and his coworker Gordon joined me for lunch at a nearby pub called the Three Chimneys -- probably the best pub we've been to so far in England. That night, Dave had his final concert and we drove back to London -- through rain, of course -- arriving home around midnight. Thus ends our Kent idyll!
Posted by Steve Reed at 6:42 AM

Oh I want to go there! Gorgeous!

More beautiful English countryside shots! I wish I could stroll in that garden.

Vita Sackville-West was a fascinating person! Both she and her husband were openly bisexual, and their open marriage was chronicled in a book by their son Nigel, who grew up to be a writer and editor.

Sissinghurst was the place where Vita lived with her husband after she lost her beloved family estate at Knole: as a woman, Vita couldn't inherit the family property, so the estate went to her uncle. This bit of unfairness is what inspired Woolf to write Orlando, its ageless, gender-shifting protagonist being an embodiment of the Sackville family: all is well when Orlando is male, but when Orlando becomes a woman, suddenly everything is complicated.

Seeing the grounds at Sissinghurst, I can see why Vita wrote so passionately about gardening.

Lorianne: I heard about that book by their son. Our friend Gordon told us it was quite controversial, with some people claiming it over-dramatized the sexuality of his parents. In any case, it sounds like a fascinating read! I also heard Vita inspired Orlando, but I didn't know exactly how -- so thanks for filling in those blanks!

Your photos are stunning- stunning place- glad you sneaked a shot of the window on the stairs.
Curious history. Poor Vita, being female in the wrong time...( as if there has been a good time for being female..)

what a beautiful place.

Steve, I stumbled across your website today. I was struck by your photos of Sissinghurst. Saw the one from the tower and was taken aback by how familiar it was. The same as one I took last summer with the same flowers in bloom! Was there on July 21. We both got the same pic of VITA on the window sill. Uncanny.
Steve Trumbull, Virginia

Steve, thanks for stopping by! I guess looking downward from the tower there are only so many directions to point the camera. :)

I think the variety of flowers in the garden stays pretty constant, as they try to remain faithful to Nicholson's and Sackville-Wests's planting scheme.

Funny that you shot the windowsill too! I thought I was so daring for taking that one, indoor photos being prohibited and all!

Beautiful photos. I haven't visited for 10 years. It's on my must visit list for next year. Have you read Virginia Woolf's Garden by Caroline Zoob. Can highly recommend. Thanks for sharing your photos. Karen