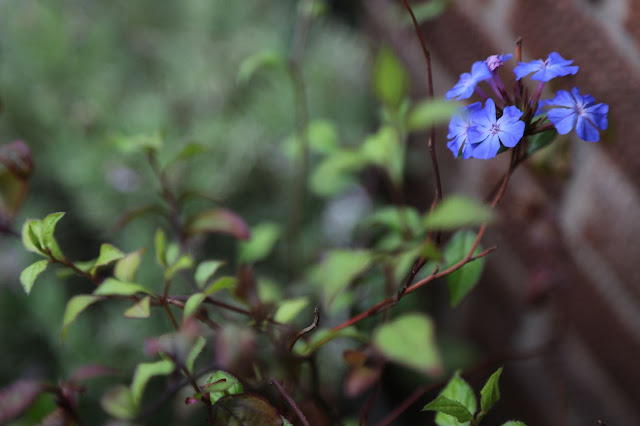 This is our plumbago plant, living happily in a corner of our balcony. Earlier this spring it was struggling -- the sun-baked leaves turned red, the blossoms vanished. Now, with the recent cool temperatures and rain, it's blooming again.

Kellee caught her flight back to the states yesterday. We took her up to Paddington Station for the express train to Heathrow, and in the few minutes it took Dave and I to get from Paddington back to Notting Hill on the tube, the weather went from sunny and mild to windy and raining. Then it went back to sunny and mild, and an hour later, back to rainy again. I'm getting whiplash! This is a very peculiar summer.

The recent persistent rain led to the cancellation of yesterday's outdoor concert in Hyde Park featuring '80s hit-makers like Bananarama, Rick Astley and Kylie Minogue. Apparently the grassy turf at the concert grounds softened and became a quagmire beneath the feet of fans at two earlier concerts -- and indeed, when Kellee and I looked inside the fence during our park walk on Sunday, I was shocked by all the mud. It looked like Woodstock!

Yesterday I cleaned out our file box -- which contains all our insurance information and medical stuff and that sort of thing, organized in a way that probably makes sense only to me -- and I found a couple of interesting folders. One, labeled "Misc Writing," contains yellowed compositions, reports and stories from my high school and college years. Another, called "Old School Stuff," has more of the same. A third, "Poems to 1992," contains my really, really horrible college poetry.

It's time to do some purging. Why am I saving compositions on subjects that I doubt I chose, like a three-page analysis of the character of Hamlet's mother? What about my brief tirade on the politics fueling Ethiopia's famine? Or my final paper for Expository Writing, on the negative effects of television on children's growth and development? (Professor Whose-Name-I-Can't-Remember: "Pretty much a collection of unsupported assertions. Not your best effort.")

On the other hand, some of these papers are keepers. I remember my study of character development in E.M. Forster's "A Passage to India" because I loved the book -- in fact, I still own the paperback, marked with margin notes and yellow streaks from a highlighter pen.

And the poems! The collegiate angst, the emotional turmoil, the purposeless drama! Some are worth keeping, a few maybe even worth sharing. The rest must go immediately to the shredder. (Well, not immediately -- first I need to buy a shredder.)

Even though I retrieved my Stonehenge report from one of these folders last August, I'd forgotten that I had most of this stuff filed away. My plan is to condense those three folders down to one. I need more space in that file box.
Posted by Steve Reed at 6:38 AM

Oooo what a great find.

I finally caught up with your last NINE posts. Sheesh! Apparently I've been too busy to read blogs in quite a while (my boss has been expecting me to WORK this week instead of do all the blog reading I usually do here - shhh!).

I periodically read through my saved stuff - and man do I have some BAD poetry! But I like keeping it to show my (theoretical) improvement.