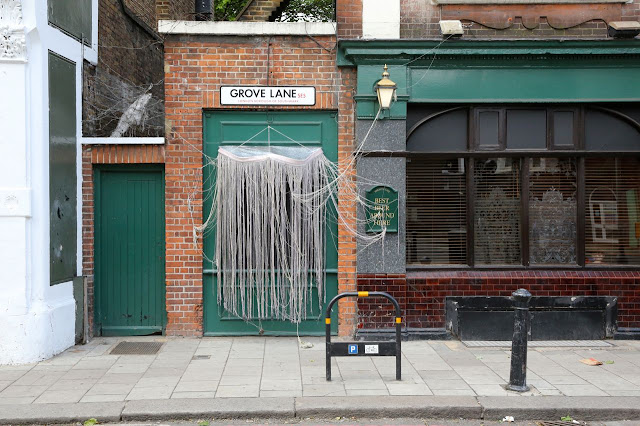 Yesterday I was determined to get out of the house and do some photography, despite our big swirly weather pattern and spatters of rain. I took the train down to Denmark Hill, in south London, and walked south into Dulwich.

For some reason I wasn't exactly brimming over with energy, and I called it quits after about four miles. But I did find some interesting stuff, including several big murals recently painted for a local arts festival. 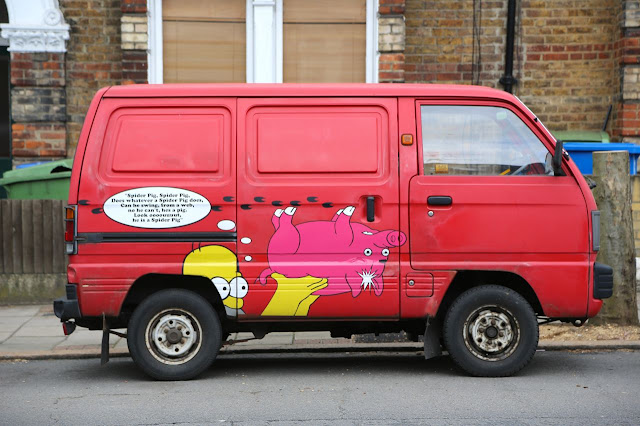 And also, parked on the street, the best van ever! Do you remember Spider Pig, from The Simpsons Movie?

I only had to pull out the umbrella a couple of times, so that wasn't so bad. And when I was ready to come home, I found a bus in Dulwich that took me all the way back up to the West End, where I caught the tube. I got my favorite seat on the bus -- on the top deck, in the very front. Riding there is a little like flying! So I got a scenic ride through the city as a bonus.

Last night Dave and I watched "The Life of Pi." As much as I loved the book, I'd been reluctant to see the movie -- I already knew the story, and I didn't really want to watch a depiction of animals suffering in a life raft. But it was actually a beautiful film. Dave dismissed it as "too preachy," but I like the way it makes us think about confronting the darker parts of ourselves; Ang Lee should be pleased.

(Top Photo: A string curtain (I think?) outside a pub in Denmark Hill.)
Posted by Steve Reed at 6:40 AM

Your urban rambles delight us all. Thank you for doing them!
Question- what is the name of the Brautigan book you read? I know you told us, but I can't remember and am too lazy to go back and look it up.

is that antique etched glass in the windows of the first picture?

Ms Moon: It was called "Jubilee Hitchhiker," by William Hjortsberg -- a biography of Brautigan by a guy who knew him in San Francisco back in the '60s. Good book!

Ellen: It's etched, but I can't vouch for its antiqueness! There is tons of etched and leaded glass in London dating from the Victorian and Edwardian eras, so it's likely.

The simpsons van is fabulous!

Steve, the string curtain is probably to keep out the flies, etc when they have the door open, don't you think? It does look odd!

I would say four miles is lots of energy!!

Four miles? Holy cow you are a badass.