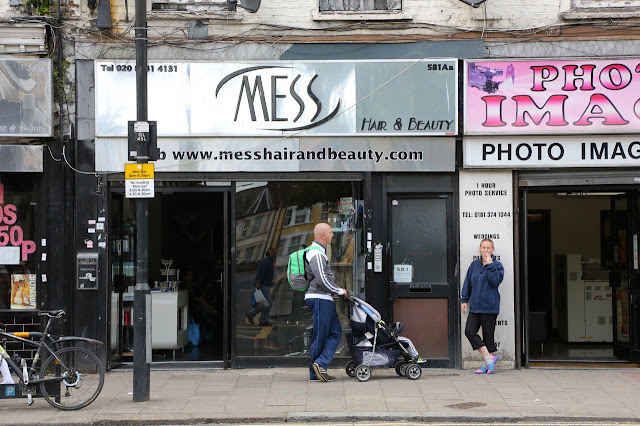 Here's one for the "what-not-to-name-your-business" photo file.

Dave and I stayed close to home yesterday. We toyed with the idea of going to a movie, but we couldn't find one we both want to see. We decided he could see "Superman" while I saw "The Great Gatsby," if we managed to find relatively synchronized showings -- and we did, but they were all the way over in Islington, and besides, what's the point of going to the movies with someone if you're going to sit in separate theaters? So we stayed home.

We did take Olga down to the canal and let her run loose. She loves the long grass that grows along the shore. She runs back and forth through it at top speed, then skids to a halt on her belly. It must feel ticklish and cool.

Speaking of which, we watched a show on TV last night in which British women were asked to design a new sex toy. I am not kidding. From a group of eight or so women, two were then chosen by the corporate sponsors to travel to China and see their devices manufactured. One of the winners came up with a vaguely heart-shaped "clitoral stimulator" and the other an expandable vibrator. Soon enough, the bright pink toys were rolling down an assembly line in Hong Kong, in front of banks of uniformed, blank-faced Chinese workers. (And what do they think, I wonder?)

Once again, I marvel at British television. It's not all "Downton Abbey"!