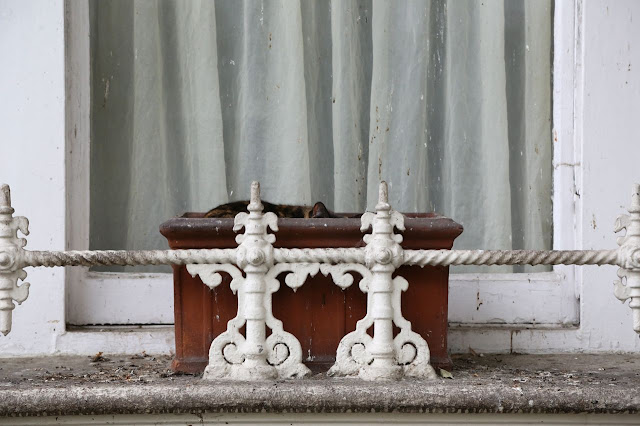 Yes, there's a cat sleeping in that planter.

The world seems to be going crazy at the moment, doesn't it? Not only do we have the madness of civil war in Syria and muslim sectarian bombings in Iraq and Afghanistan, we have rampaging Buddhist monks in Myanmar, violent protests in Turkey and huge numbers of people swarming the streets in Brazil. It seems like such protests are often triggered by a small thing, like a bus fare increase or the taking of a public park, but that's not really what they're about. People are pissed off. As the New York Times pointed out, the protests relate more closely to the Occupy movement -- general anger about inequities in resource allocation and decision-making.

If I were part of the one percent, I would be taking notice. No one is secure when resources are concentrated among the few at the top of the ladder.

Thus endeth my political analysis for the day.

I actually ordered some new clothes yesterday -- shock! I've been talking about it for months, and finally I got online and replaced the tattered khakis and jeans that I've had since I lived in Manhattan. They were at least four years old, some more than that, and they looked it. Now I can dress appropriately when work resumes this fall. I still need to get some new socks and other small things. I'm thinking I might do that when I go to Florida in less than two weeks. (Where does the time go?)

Is it ironic that I'm grousing about wealthy one-percenters and then talking about buying new clothes? I suppose I'm not doing that badly, personally. I have a job and some savings. But I also don't face the economic pressures of a lot of the dwindling middle-class, like raising and educating children, and I still doubt that Dave and I will ever be in a position to buy a home in London. My new pants don't change the fact that the system is broken.

Maybe I need to stop reading the news and spend my time like that cat.
Posted by Steve Reed at 7:01 AM

I do not think anyone could accuse you of over consumption...As to the one percent at the top, they don't care, which is what drives others to civil strife.

Yeah. You bought new clothes, not a slave-operated factory in a third world country. You're okay. We still love you.

it is as it ever was. but yeah, lots of unrest in the world. or maybe not more but we near about ALL of it now.

I hate having to buy new clothes. jeans especially. even the 'short' length is to long for me and I'm not that short! 5'4" but I don't wear 4 - 6" spike heels. and all women's jeans assume that all women wear shoes like that all the time. so I buy my jeans in the men's dept by waist and length. yeah, they are baggy but at least they fit. why won't they sell women's jeans by waist and length? and I'm flat chested so that women's blouses don't fit because the manufacturers assume every woman has huge boobs and if you're not born with them then you went out and bought you some.

I wish I could order jeans online - but I really have to try them on. So I'll just wear the other ones until they fall about because I do NOT like shopping.

Live like there is no tomorrow- buy clothes and a hat- eat, drink and be merry, not worried- it is all out of control, anyway. You and Dave are doing it right! I often think about buying a more self sustaining bit of property, chooks in the yard, kale all year round- but that sort of life requires commitment and a settling in. Not ready for that yet. I think that renting is good- more freedom. It is funny that you would wait to go to Florida to buy socks- Florida where the sun shines and socks are likely sunshine socks- England where socks are worn year round- probably doesn't matter- they may all be chinese socks- no matter. I just ordered and received a top made in India ( the other china) and it cost my entire allotment for clothing this year! Prices are insane, as is the world we live in at the moment. Is what it is and will only become more interesting as climate change switches everything ( boiling in Alaska!) and the pollution of greed fouls our nests. Think I will buy another hat and eat pie...and let Dexter lead the way.

You will love your new clothes.

This period of time feels exactly like the 60s. I keep saying it - believe me, this was just how it felt: the upheavals and societal as well as personal transformations. It's JUST LIKE THE 60s.

I think your cogent analysis of the situation was spot-on.