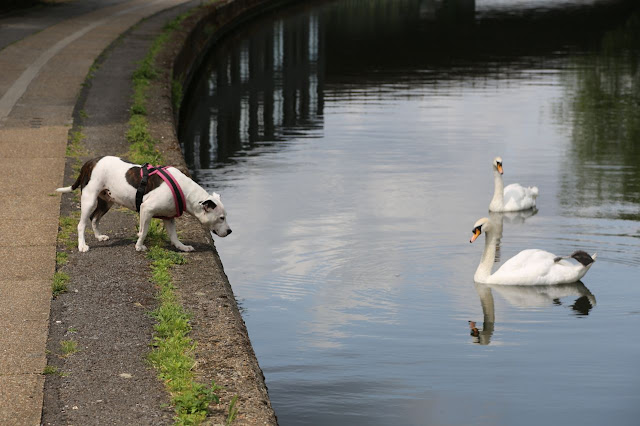 We were back at the canal yesterday, where Olga checked out the swans -- from a safe distance. If she got any closer those swans would kick her butt.

We also saw yellow irises growing along the canal banks and blue dragonflies buzzing through the grass. While you're enjoying photos of those, I'll tell you about Dave's birthday. 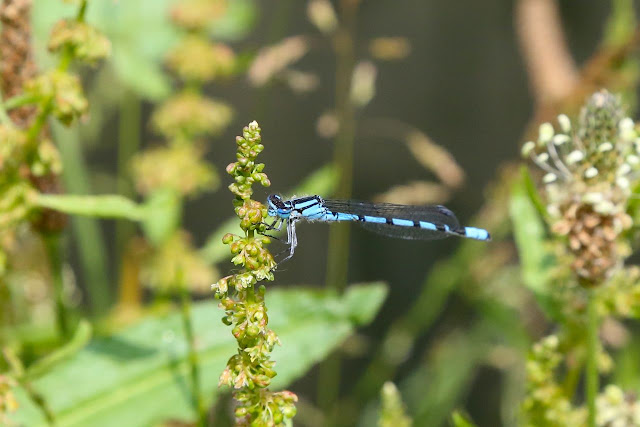 I took him to Heston Blumenthal's restaurant Dinner, at the Mandarin Oriental Hotel in Knightsbridge. If you're like me before I moved to London, you probably haven't heard of Heston Blumenthal. But here in England he's quite the celebrity chef, known especially for molecular gastronomy. Dinner features dishes drawn from historic English recipes that are hundreds of years old. 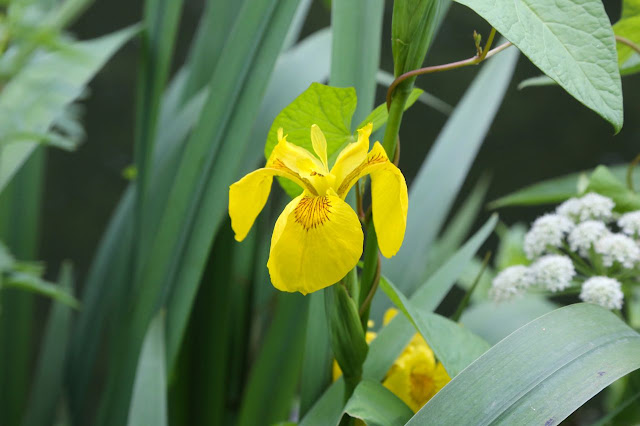 I went the adventurous route and had an appetizer of nettle porridge with frogs' legs -- I felt a little guilty when I thought of all the slick little green tree frogs that clamber all over my family's house in Florida -- and an entree of spiced pigeon. Dave had an appetizer called Meat Fruit, a paté made to look almost exactly like a shiny tangerine, and a main dish of veal sweetbreads with asparagus. (More power to him. I am not a sweetbreads fan.)

We both had a dessert called a Tipsy Cake, which was basically booze-infused brioche served with baked pineapple. Fab!

Anyway, we liked the restaurant a lot. We'd definitely go back. 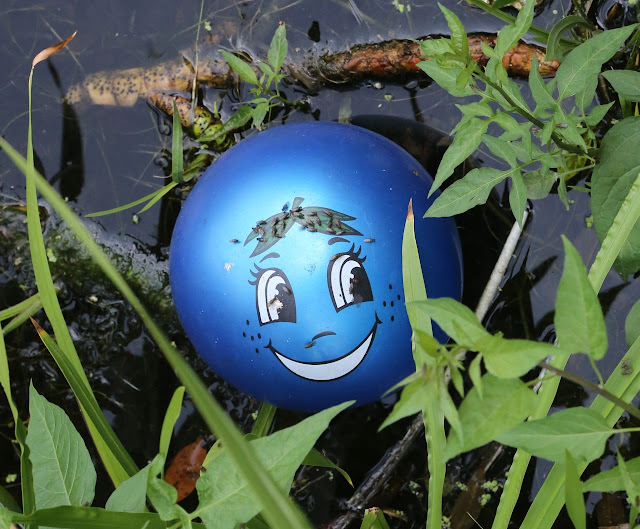 Yesterday we looked into ordering a bed -- we've been sleeping on our mattress on the floor, which I like, with my minimalist tendencies, but Dave finds a little too collegiate and unsettled. We also used Dave's Le Creuset gift certificate to buy a couple of pieces of birthday cookware.

I looked into buying tickets for Barcelona in August, and I swear, I have never had such a struggle with travel web sites. I must be coming down with Alzheimer's. I'm usually fairly computer-savvy, but I could not set the parameters of my search to exclude certain airports and ridiculously early-morning flights, and allow it to let me choose an outbound flight separate from an inbound one. We could only choose both at once, in pairs. Anyway, it's a boring story, but it drove me crazy and we still haven't bought tickets. Today, hopefully.

(Photos: The aforementioned swans, iris and dragonfly, along with some kind of toy ball floating in the canal, disturbingly colonized by houseflies -- mainly on the eyebrow. Weird!)
Posted by Steve Reed at 6:16 AM

Happy birthday to Dave, and that sounds like quite a meal. I'm ambivalent about molecular gastronomy. I'm married to a classically trained chef who scorns the whole trend, and I'm afraid I've been unduly influenced --

Dave is classically trained and he scorns the trend, too. But he also enjoys the food! :)

I've never been fond of that trend either, though I've tried a couple of times when visiting other places. I'm glad you and Dave enjoyed his birthday.

I don't mind molecular gastronomy as long as they don't overdo it. I find it interesting and pretty darned creative. Your meal sounds great.

I think your dragonfly is a damselfly though. :) I love that particular color of blue, especially on a bug.

Olga is smart not to get any closer to the swans. They can be pretty nasty.

I've never had the molecular gastronomy experience and I've never eaten frog legs but it sounds like an experience and if, as you say, you'd go back then it must have been good.
Don't you sort of miss the old days when you'd go to a travel agent to get the best deal on a trip? I HATE dealing with those web sites. They make me crazy.
Do you suppose there was something in the paint on that balloon which the flies liked? Ick. Your iris and your dragonfly are beautiful though, and Olga-well- she's always a muscle in motion in your shots of her. I can feel her quivering.

Love the dragonfly. Happy birthday to Dave. The birthday dinner sounds like quite an experience.

I've never even HEARD of molecular gastronomy! But it sounds like it's not exactly bangers & mash :)

Your birthday celebration for Dave sounds great- I used to enjoy going out for unusual expensive dinners, but Mr. Man is pedestrian in his taste and does not appreciate anything that does not require ketchup- Am Pm 50 cent hamburgers suit him just fine, thank you...Catching up- your previous blog is stunning- the tree chair, Olga and that painting which I adore! It is fresh and summery, You really ought to keep it ( Dave, be quiet...) Lovely post!