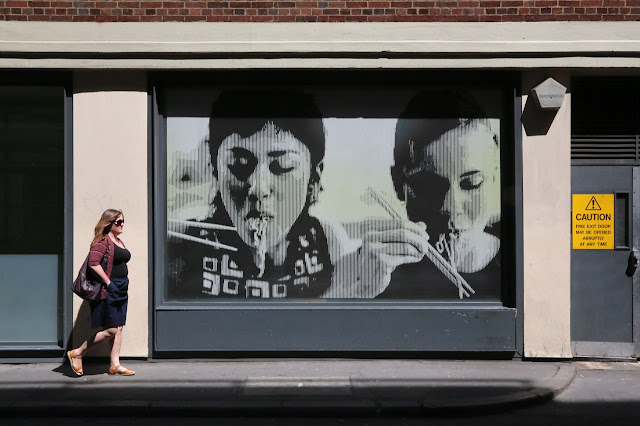 Last night I went to the opera! This is a rare event for me, not being much of an opera fan, but Dave took his AP Music students and I tagged along for the fun of it. Only when I got there did I remember that opera isn't that much fun.

The production was "La Bohéme," performed by the English National Opera in a huge gilded hall known as the Coliseum. I can't fault any element of the production -- the singers were terrific, the sets amazing, the orchestra phenomenal. It being the ENO, the singers sang in English, which was a little odd. It made much of the dialogue seem quite banal: "The weather is dreadful." "Yes, the weather is dreadful." That kind of thing. Somehow in Italian it all sounds so romantic.

In every scene, I found myself thinking of "Rent," Jonathan Larson's musical based on "La Bohéme." I was equating characters, relating plot developments, comparing and contrasting. I'm going to dig out my "Rent" cast recording today -- I listened to it obsessively in the '90s, but not in recent years. I need a memory refresher.

The Coliseum itself is a bit of a problem. Maybe I'm just being typically American, wanting a cushy movie-multiplex recliner, but I found the seating miserable. The seats are made for people with much shorter thighs than me. I found myself sitting sort of sideways, and the whole seat felt like it was pitched forward -- like I was leaning toward the orchestra pit, three levels below.

Anyway, as we said after the show, thank god it wasn't Wagner.

I also had my first day of work yesterday! I think I'll get the gist of this job pretty readily. Yesterday wasn't really a typical day, because students are in exams and not hanging around the library. But some are checking out materials for the summer, so I helped with that and with shelving, learning where items are located. I'll work on Monday, Tuesday and Wednesday as well. I'm doing half-days since we haven't yet settled dog care issues.

Speaking of which, Olga managed to swallow more sticks on her walk Thursday, and yesterday morning she was obviously in gastric distress. She managed to rid them from her system, and without going into too much detail I'll say there was blood involved -- and then when we went walking she tried to eat more sticks. A guy who had stopped to pet her told me, "Oh, you have to train her not to do that."

From opera to Olga and her poop.
Sounds like a balanced life to me.
I hope you come to love your library job.

Dogs are so weird the way some of them want to eat things that are not food. I had a friend once whose dog would eat dish towels and paper, preferably rolls of toiler paper. More than one trip to the vet to get the impacted stuff out. she could never train the dog not to do it.

I've never been to the opera but I'd like to go at least once just for the experience. And I think I would want it to be in a foreign language just to avoid hearing them sing about the weather!

The opera...I'd like to go but, whenever I hear the word, I immediately think of the movie Moonstruck and picture myself as Cher sitting next to Nicholas Cage in a fabulous dress and, well, you know what happens and I know that ain't gonna happen. Now I've got to watch that movie again! Congrats on new beginnings!!!

I've only been to the opera once at the Met. Loved it. I loved the little translators imbedded in the back of the seat in front of me. Way cool.

You might have to walk Olga with a muzzle on so she can't pick up things. Just a thought. I saw these in my "The Week" magazine and though of you.
http://www.japantrendshop.com/oppo-dog-muzzle-quack-p-1552.html

What exactly will you be doing in your new job? E-mail the details, please.

It's sort of embarrassing, but I've never been to an opera. I am only vaguely interested, but the idea of seeing one in English makes me giggle.

You're a Rent head! So am I. So is my daughter. We've been to the theater production twice and watch the movie every so often and sing the songs ALL THE TIME. La vie boheme! Who's your favorite character? Mine is Collins followed closely of course by Angel. Maybe I'll watch the movie again tonight! Definitely more appealing than opera to me. My husband however finds the opera quel romantique. I'm in a silly mood.

Your opera experience is hilarious- Makes me want to sing " Shall I make toast and eggs for you this morning" It would make life so much more entertaining if we sang all the mundane crap. I saw the Magic Flute when I lived in London- It was fabulous but I had eaten a Scottish egg in the lobby before hand- not a good idea, EVER!
Olga. She is the queen pooch of all the land!

Mike was on an opera kick for a while - thank goodness he got over THAT. We never did go to see one at a theater though - we should probably do that at least once.

I've only heard a snippet and I'm already jealous of your job :)