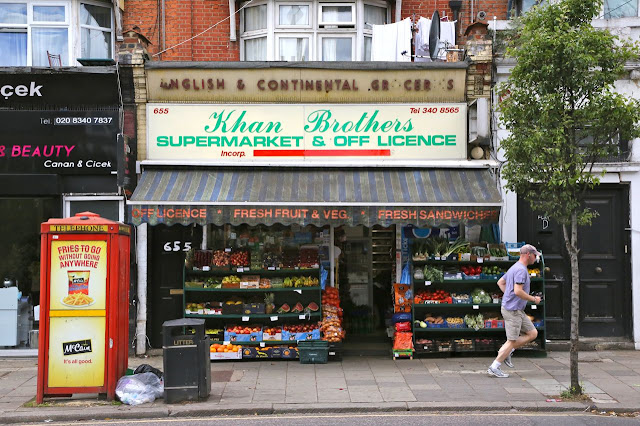 I've told you about the online game "GeoGuessr," which plunks you down somewhere in the world using Google Street View, and you have to figure out where you are. I have become quite a GeoGuessr perfectionist.

When I first began playing I was happy to get the country correct. Now I am doing my best to get the exact location, which I've learned can be done if you're willing to click around until you get enough clues, like street signs. (I'm making up my own rules, but I think reading signs is fair game. I do not get on Google separately and look things up.) Sometimes it takes quite a bit of clicking. I can make a game last a couple of hours.

Each game consists of five rounds, and just this week I reached my all-time high score of 31,281 points, by hitting all five rounds within a few kilometers. 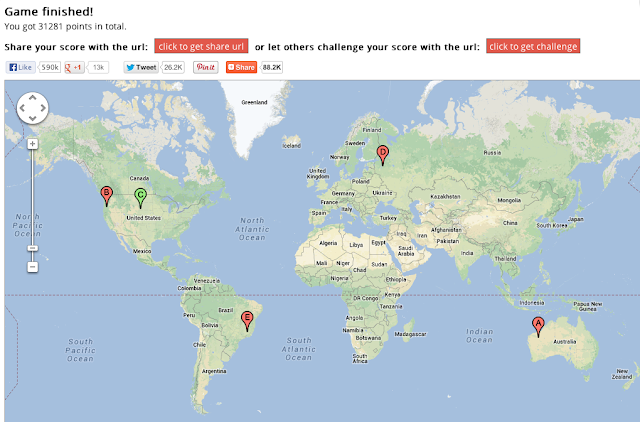 The map normally shows the distance between your guess (red pin) and the correct answer (green pin), but the pins overlap in these five cases. Pretty darn good, if I do say so myself!

The downside of the game is that it seems to be limited geographically. I've never had a question from China, India, the Middle East, Oceania outside Australia, southeast Asia, or anywhere in Africa aside from South Africa or Botswana. I guess it can only go where Google has sent cameras.

It will also occasionally throw a curve ball, by putting you in the middle of a 360-degree image that you can't move around in. If there are no remarkable features, you just have to wing it. Both times I got one of those, I didn't even get the continent right. (One was underwater!)

Still, there's nothing like the challenge you feel when you're plunked down on a rural farm or forest road, with no visible buildings or signs, and you have to figure out where the heck you are. An added degree of despair sets in if you eventually find a sign and it's in cyrillic!

-- I tried an experiment with Olga yesterday. I let her walk me. She set the pace and the direction. I was curious to see where she'd want to go, and wouldn't you know, she took me right to the canal. She really does love the canal.

-- Little London Observationist is blogging some of my street portraits, along with those from other London photographers. You can see part 1 here.

Well, I'll have to check that game out -- or encourage my kids to! And congrats on the photos included -- I love the one you have on there of the evangelist.

What a lovely post with your photos in it! My favorite of yours was Trio.
And it makes me smile to think of Olga taking YOU on a walk. Of course she wanted to go to the canal!
I think that game would completely mystify me. I wouldn't be able to figure it out if they plopped me down ten miles from my house.

sounds challenging. I am not well traveled so I imagine I would be dismal at it.

I'm afraid of two things: That I would be so terrible that it wouldn't be fun OR that I would be just good enough to get lost in it & emerge 3 hours later. Ha!

I like the idea of letting Olga walk you, Steve! Sounds quite fun! Sweet, the canal.

I'm going to check out this game.

I would be hopeless at this game I think.

Congrats on getting your photos out there!

now that sounds like fun. armchair travel at its finest.