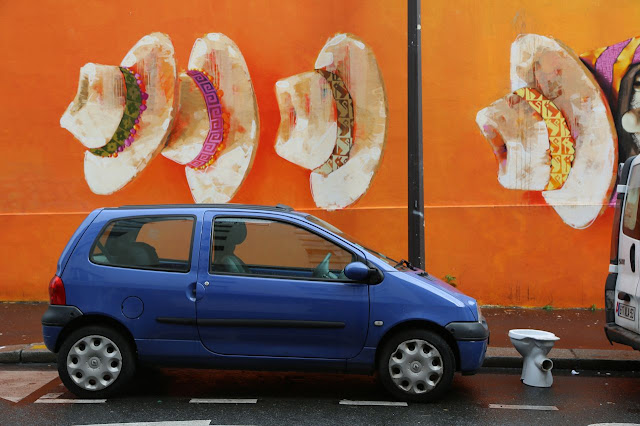 Did you see the piece in The New Yorker about the photographer who made a year-and-a-half long project of pointing his camera into his neighbors' windows? Needless to say, the neighbors were not amused when they heard photos of themselves lounging around in bathrobes and eating cereal were hanging in a Chelsea gallery. The photographer was told by an attorney that "in a city where people are crammed so tightly together, there is scant presumption of privacy," according to the article. Still, the neighbors are said to be considering legal action.

Even I, with my fairly high comfort level about photographing strangers, am amazed he would try to get away with that.

When I took a photo class last year, the teacher explicitly told us not to shoot into people's windows. (I wouldn't have tried anyway, at least not with a residential window -- unless it was for a benign photo like this.) People on the street, though, are fair game, because they're in public. 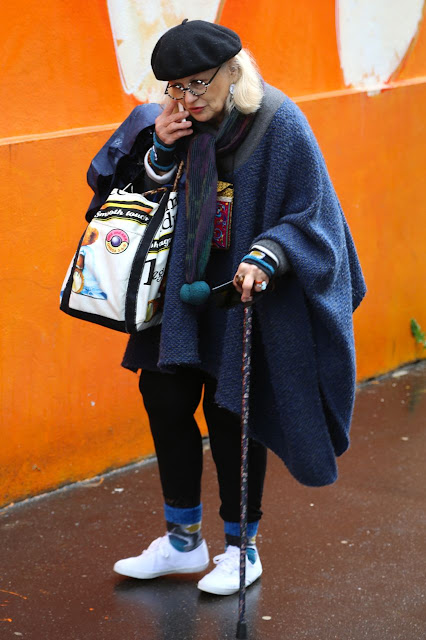 Even then, I sometimes find myself debating ethics, if not legalities. For example, last week I took this photo of a kiss on Westminster Bridge. I actually took three -- one of the couple smiling at each other, one of the kiss, and one of a hug afterwards. To me, they're poignant portraits, and Robert Doisneau and Alfred Eisenstaedt made legendary pictures of public kisses -- so there's certainly precedent. Still, I debated before putting them on Flickr, and in the end I posted only one. (Why that's better, I'm not sure. It just felt better to me.)

I try to consider whether a photo is likely to make someone unhappy or uncomfortable. If I kissed someone in the street and someone else took our photo, would I care? I think I'd be flattered. I'd probably want a copy. (Unless I was kissing someone I'd rather the world not know about -- in which case, why would I be doing it in public?) But then again, I love photos. I'm a picture person.

I do agree with the New York attorney that the presumption of privacy is different in big cities, especially those with high volumes of pedestrians. In New York or London, life is lived on the street, for all to see. Taking street portraits in Tampa, my car-culture hometown, would feel different. I think people have a higher expectation of privacy in that environment, even outdoors, because they're often in their cars and there's less public interaction.

And I would never, ever shoot through anyone's windows, anywhere. Good lord.

The same New Yorker also had a knockout article about a guy in Chelsea who rented his apartment to something like 46 different people. He'd collect a deposit, put them off, make up excuses and basically prevent them from taking occupancy -- all while collecting deposits from others as well. It's such a New York story. Stuff like that could only happen in a place where there's such a premium on living space.

We've been reading the same articles! The New Yorker is just endlessly fascinating, isn't it? And so is the human race as we go about our lives. But yes, I agree, shooting directly into people's windows is just...so creepy.
And then to put up a display and call it art! Which, I guess it was but I don't know. I can't imagine living in New York but the idea fascinates me at the same time. It would be, for me, like living on another planet. If someone around here started shooting photos of people in their houses he or she would at the very least be questioned thoroughly by the police and if that did not deter the photographer I have a feeling someone might bring a gun into the argument. Not saying that's right. Okay. I'm rambling. Sorry. But it would not go well. Let me just say that.

I haven't read that New Yorker, yet, but I just love it when it's a "good" issue, filled with article after article that I want to read! When I lived in New York, my apartment faced the back of the building and one could right through the windows into the windows of the back of the buildings from the next block. It was wonderful -- stories unfolded in front of your eyes, little vistas of routine, and sometimes I would jot them down -- the stories of people, their lives that I had made up. I can't imagine taking photos of them, though, and think that this is one area of "art" where writing is better.

The article you mention would give blind and curtain manufacturers cause for jubilation and a possible new advertising slant...

The New Yorker is one of my favourite magazines and Elizabeth is right. It is better to write than to shoot into peoples private spaces.

Something a bit like the new york story happened to someone I know. They rented the apt from England, paid a hefty deposit, and then when they turned up with their suitcases, there was no such address.

I just wouldn't publish a photo of someone taken in public without their permission. Kind of like free speech to me...just because we can doesn't mean we should.

No matter how crowded the living space, I think we all have the assumption of privacy in our own abode. Shooting through windows is not only an invasion of privacy, it's voyeuristic. There's an appeal though. Many people who live in high rises have telescopes and they spy on other people.

Oh I would be MORTIFIED if someone took pictures of me in my home without my knowledge! Not likely to happen in my small town (I hope).

I'm fascinated by street photography and it's a goal of mine to try it and get comfortable with it. As of yet, I just have not had the nerve. I did give it a try in Bryant Park...took a candid of a woman working on a laptop. She heard the shutter and gave me a 'don't do that again or I'll kill you' look. I really need to hone my technique and alter my attitude! Did see part of the New Yorker story on line and was intrigued. That photog had a lot of nerve. And, btw, love your street stuff...always interesting!

Ms Moon: I guess it was art in that it was provocative, and makes us consider topics like privacy in an urban setting. But yes, it's creepy too!

Elizabeth: I love a "good issue" too! This is the one with the kids with the architectural popsicles on the front. I swear I read the whole thing front to back. I used to watch my neighbors in New York -- it's impossible NOT to. But yeah, pictures are a step too far.

E: Some ad rep at Conde Nast missed an opportunity!

Jenny: Yikes! Did they get the apt on Craigslist? That was the venue for this scam artist. I suspect real estate on Craigslist is a dicey prospect.

Aint: I see your point, believe me. But then there would be no journalism, at least of the variety that involves photographers shooting photos of people on the street. Which news photographers do all the time. You know? The question for me is, does the photo have value? Does it say something, or provoke a feeling or reaction in the viewer? If so, it's a legitimate piece of social journalism and can warrant publication. (At least online!)

Ellen: I must admit I'm curious to see this guy's pictures, so I guess I'm just as voyeuristic as anyone else!

Bug: Me too! As Ellen said, in our homes, I think we do have a reasonable expectation of privacy.

Helene: Yeah, it can be scary to photograph strangers, but sometimes you just have to go for it. If they're dressed really unusually or doing something unusual, I feel less conscientious, because I think they'll automatically understand why I'm photographing them. You know? As for them hearing the click of the shutter, maybe you just need a longer zoom lens. :)