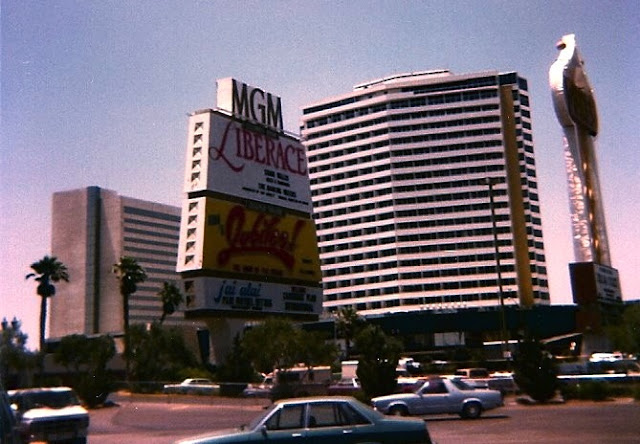 Having just watched "Behind the Candelabra," the recent HBO movie about Liberace and his addled relationship with Scott Thorson, I had to share my own photo of my brush with Mr. Showmanship. I took this in 1983, when my dad and stepmother drove me and my brother through Las Vegas on a cross-country trip. We stopped at the MGM Grand Hotel for lunch, and there he was on the sign, Liberace, the headlining entertainer! We didn't see his show -- we were in town just long enough to eat our meal and buy a postcard -- but apparently I was still dazzled enough to want a picture.

That's not the MGM Grand in the background, by the way. That's The Dunes, another famous Vegas hotel, which was demolished in the mid-'90s to make way for one of the mega-resorts there now.

Did any of you watch "Behind the Candelabra"? It wasn't televised here in England -- Dave and I went to a movie theater to see it yesterday. It's very well done and well-acted, though as it's taken from Scott Thorson's book it's not exactly even-handed. I'd like to see Liberace's own version of the same events.

I remember seeing Liberace on TV shows in the '70s and early '80s and thinking him thoroughly bizarre. I got his campiness, but I never understood his appeal to the masses. Basically he knew he was a caricature, as he explains in this 1986 series of interviews on Good Morning America. It's hard to believe some of his fans were apparently ignorant of his homosexuality. Was anyone ever that naive?

Yesterday when I searched my blog to make sure I hadn't posted this photo before, I came across this entry from 2007 describing my very brief ownership of a t-shirt from the now-closed Liberace Museum. I'd totally forgotten about that!
Posted by Steve Reed at 6:43 AM

Did he ever write his own book?

He did, but I think it's been rightfully dismissed as dishonest. For example, he apparently asserted that the love of his life was Sonja Henie.

I think people were really that naive back then. Have you seen the documentary on pbs about the first(public) gay bishop in a England church (I think)...what a sweet man and a great story. I wish I could remember his name..it was all about love really.

Wow, what a flashback photo! I was thinking to myself, that doesn't look like the MGM I know, and then I read the next line. :)

My grandmother LOVED Liberace! I don't think she had a clue about his sexual preferences. Not one.

Great picture! I love those old Vegas shots. Everyone was talking about the new movie so we actually signed up for HBO just so we could watch it. My friend Maria keeps texting me the line "look who's up"

I have had several Liberace moments. Joy and I visited the Liberace museum on our first trip to Vegas (after his death). And when he last played Radio City I stood outside one night with my friend James talking about how we wished we had enough money to see it. Months later he was gone. James has also passed away. I treasure those memories.