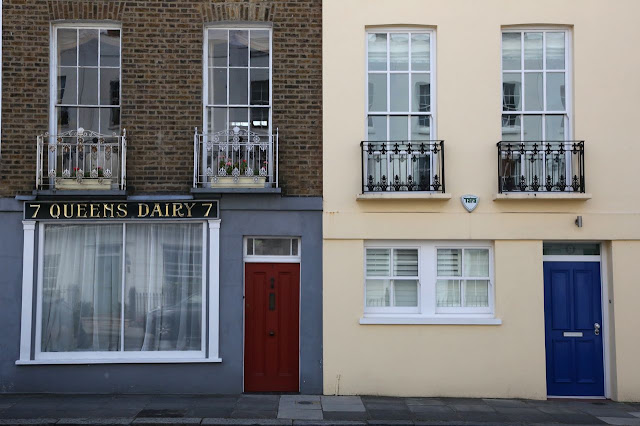 I'm testing some schedule changes this morning, to see how well they work for me and the dog. I'm going to work in the school library at 8 a.m. and coming home shortly after noon. This is during the time Olga usually gets her long daily walk, so it remains to be seen how well she will cope with being inside. Fingers crossed! (I only have a few work days this week, before summer break begins. Then I start the job for real in the fall.)

Dave and I rented an interesting movie the other night, "Room 237," exploring theories some fans have formed about Stanley Kubrick's film "The Shining," and all the hidden messages it may or may not contain. Some of it is fairly out there, like one guy who contends that Kubrick helped fake the footage of the 1969 Apollo 11 moon landing, and then revealed that fact using visual codes in "The Shining." I think in the end the movie is not so much about "The Shining" as about the way humans process information and look for hidden patterns and subtexts.

Then we rented "The Shining" itself to watch for some of the coded messages. By the middle of the movie, though, I'd pretty much forgotten about them and was watching just for the movie's sake. I really like that film, as I do many Kubrick movies. I think a lot of the supposedly subliminal messages are merely honest accidents or continuity errors, while a few I'm sure are intentional symbolism -- like the scene in the kitchen where young Danny is talking with Dick Halloran, and a rack of knives is positioned over the boy's head. No question there's some foreshadowing there! I don't think it says much about the moon landing, though.

Remember our avocado seedling? The one I grew from a seed last year? I moved it from our sunny living room windowsill onto the balcony for the summer. And there it has developed what appears to be a serious case of leaf burn from the sunlight. Leaves that were once light green have turned reddish-brown, at least on the surface. (They don't look like they've died all the way through.)

How is it possible that my avocado, a genetically tropical tree, has been damaged by the intensity of sunlight in England? Window glass screens out some UV rays, but still -- I wouldn't expect them to be that intense here. Poor avocado! I hope it adjusts and bounces back once it's been outside a while.

(Photo: Holland Park, on Saturday.)
Posted by Steve Reed at 6:30 AM

The Shining is one hell of a scary movie. The story it's based on is too. I think that scared me more than the movie but maybe not.
Your poor avocado! Yeah, I don't think they like direct sunlight. They don't like freezes either. I can tell you that.

I think your avocado will be OK. It may not get as much light as you think in the window. Maybe it needs a little umbrella until it makes the adjustment.

I know nothing about avocados - except that they're tasty :)

But now that my interest has been piqued...

I've always told Rick that I would be exactly like Jack Nicholson with that wild look in my eye and the ax during the winter months if we lived at our cabin full time. :)

Ms Moon: Now, see, I would have thought an avocado would be a direct sunlight plant. I mean, they grow into huge trees in the tropics! But I guess you're right, at least when they're at this young stage.

Ellen: Hope so! We had a few unusually sunny days and that's what pushed it over the edge. It's cloudy again now so it's getting some relief.

Bug: Yeah, it IS spooky. The book is great, too, in a different way.

Nancy: It is not your conventional horror movie. There are some bloody moments, but it's much more about the psychological and supernatural, the idea that some places and people carry their own hidden energy.

Lynne: LOL! Yeah, winter in a little cabin would be crazy-making!

I've never seen The Shining but, living alone, I don't think a viewing is going to happen anytime soon. That avocado looks a little like by geraniums on the porch but they are suffering from way too much central New Jersey rain as is my basement. The plumber arrives tomorrow! Hope that avocado survives...good eating!