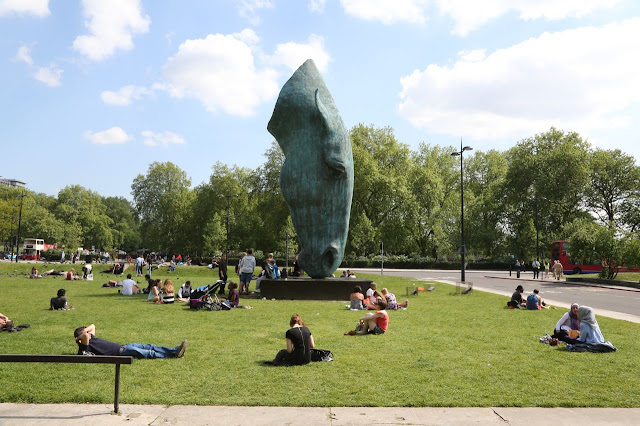 Another beautiful spring day yesterday! Olga and I took a long walk up to Paddington in the morning, and then I returned in the afternoon to try to photograph the windows in Paddington Station. They're huge, arched windows with an attractive, ornate grillwork -- but ultimately I wasn't happy with any of my photos, and I was a little afraid that trying to take pictures in the train station would bring an unfavorable response from the security people. So instead I wandered down Edgware Road toward Marble Arch. 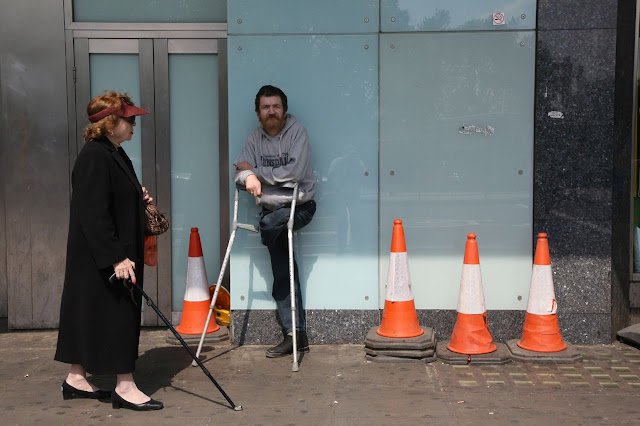 There I met Robert, who was collecting coins on the sidewalk and who was happy to have me take his photo. The woman just happened to wander into the frame at the last minute.

Marble Arch can be a bit down-at-heel. It's essentially a big traffic island in the middle of a swirling river of buses and cars. The park seems to attract those who are down on their luck, many with piles of baggage and apparently nowhere else to go. But as you can see from the photo at the top, that forlorn atmosphere was tempered yesterday by many Londoners out enjoying the day. The huge horse head sculpture is called "Still Water," by Nic Fiddian-Green. 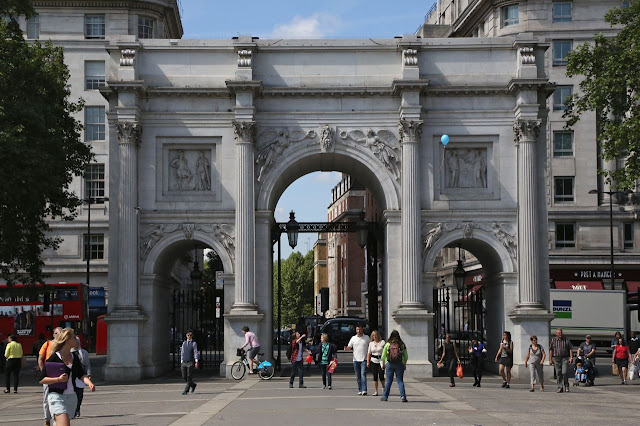 Of course, there is an arch at Marble Arch -- designed in 1825 as an entrance to the courtyard at Buckingham Palace. It was moved in 1850 to its current location at the northeast corner of Hyde Park to make room for a palace expansion. I photographed it just as one of those kids lost a balloon!
Posted by Steve Reed at 6:55 AM

I am glad you mentioned the lost balloon because I would have missed it. It reminds me of the cute children's book Where Do Balloons Go? An Uplifting Mystery by Jamie Lee Curtis.

Giant sculptures like that horse head FREAK ME OUT! Just a weird thing about my mind.
Anyway, golly. London is so damn photogenic. And you have such a good eye.

I swear Ms. Moon & I are twins - I was going to say that the horse sculpture freaked me out too. Yikes! But it sure was a beautiful day :)

Great photo of Marble Arch. It's always looked a little shabby in any of the photos I've taken.

What a gorgeous day you had. Its been black, dismal and wet here-no let up in the rain since yesterday. I can't say I'm overly fond of that horse head, but I did catch the blue balloon.

I didn't see the balloon either.

But am I the only one who really likes that horse head sculpture? Because I do!

Love that 'balloon' shot! I spoke to a flight attendant who just came back from London yesterday. She said the weather was fabulous. Enjoy, enjoy, enjoy!

Thanks for the info on gigantic plant! Your photos are the best part of my day- these are wonderful! It took the longest time for me to "see" the horse head- My monitor is smallish and my eye sight is compromised- I saw a whale, no, a seal, no a manatee...and then it clicked! Love it!

It took a minute for my brain to register the horse head and how the hell do you move something like the marble arch?!