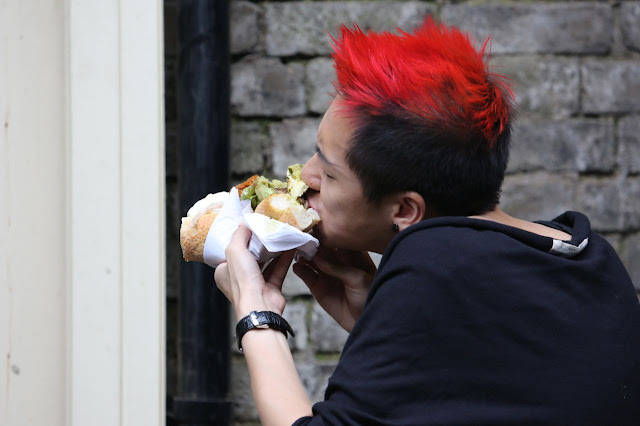 Dave and I did make it to Borough Market yesterday. I brought the camera, but I only saw a handful of interesting people. 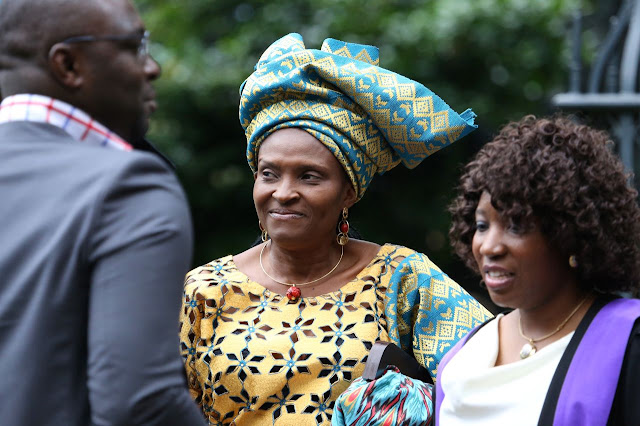 I could probably have photographed myself, though, because I wore the new red pants! And boy are they red.

Olga is not at all sure she likes them.

We wandered around the market for a while -- we bought a couple of unusual bottles of wine and some potted chives -- and then we went to the West End to buy tickets for a show.

Almost a year ago, when I first started working at the school, I was given a couple of theater ticket vouchers worth £40 as a "new employee" gift. They've been sitting on a table in our guest room ever since. Meanwhile, Dave and I have wanted to see "The Book of Mormon," the ridiculously popular show by the creators of South Park, since we lived in New Jersey. So yesterday we got motivated, grabbed the vouchers and went to the box office, intending to buy tickets for a month or two from now. (It's playing in both London and New York.)

Well, the theater surprised us by saying a few tickets had just been released for today's matinee. So Dave and I grabbed them. We're off to "The Book of Mormon" today!

That's going to be interesting, because it's also Pride day in London, and I want to try to catch some of those festivities. And we have a dinner planned tonight with some coworkers from the school. So suddenly there's quite a bit going on. I need to keep all this in mind the next time I complain that Dave works too much and I'm trapped by dog-care duty!

Speaking of which, Olga is not feeling well this morning. Sticks, I'm guessing. She's lying on the floor and not eating. She'll probably hack up the offending items soon enough. Ah, canine life.
Posted by Steve Reed at 7:13 AM

I can't wait to hear what you have to say about that play. I haven't seen it but Mormons fascinate me.
One of these days, Olga is going to eat something that doesn't pass through. Ya know? I've seen it happen before.
Those pants ARE red. Dang. You're one fashion-forward dude!

Re. Olga, yeah, I know, and it worries me. We try very hard to get things away from her before she can ingest them. But sometimes we just don't move fast enough. I saw her eat this stick yesterday, and we almost took her to the vet today -- but she's eating and drinking a little this afternoon so we think she's working it through her system.

Love the red trousers...Can't wait to hear your impressions of the play...What happened with the cops?

LUCKY! I SO want to see Book of Mormon- maybe next time I am in London. Pretty sure you will laugh and laugh and wonder...Red pants and Olga- Excellent!

Sounds like a lot of fun to me. I love the red pants (excuse me - trousers) - & your shoes!

I love all the elements in that first photo! Great!

I'm with Ms. Moon in regard to Olga's eating disorder. Does she chew the sticks up in small pieces?

I hope the play was good!

E: We still don't know what happened with the cops. We confirmed that they caught the guy, but none of the neighbors know what he'd allegedly done. I suppose I could go to the police station and try to find out but I'm not THAT motivated.

Linda Sue: You should definitely see it. We laughed til we cried, and I do not say that lightly.

Bug: Yes, TROUSERS. I need to keep that linguistic change in mind as well!

Lynne: She usually chews them into chips, but occasionally she vomits one up that's surprisingly large. (She's only vomited sticks two or three times, so that's rare.) I think you -- or someone -- suggested a muzzle, but we don't want to go that route. We're thinking if we get her to bring and carry one of her dog toys on her walks, it may discourage her from picking other things up. That seems to work in the park, at least.