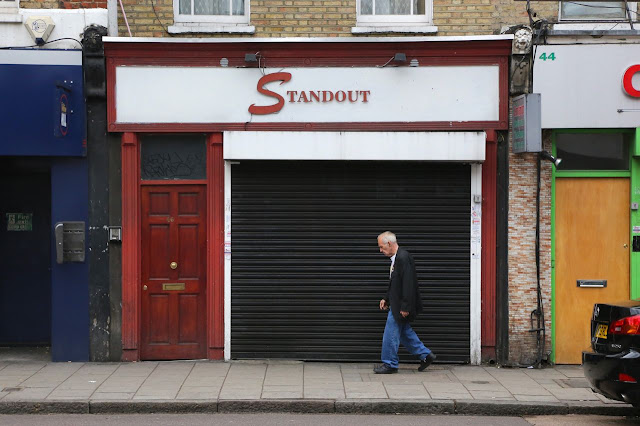 After waiting almost a week to hear from my family (!) I can now report with certainty that I have a new niece. One of my main purposes for my trip to Florida is to meet her, so I'm glad to know she's here and healthy! She was born June 22, and is named Kate. The family expands!

I've been badgering Dave to go out on the town with me, since we only have a few more days together before I leave, so I think today we're going to go to Borough Market, a huge open-air food market south of the river in Southwark. (I've been there a couple of times before, but it's been about a year.) I've been frustrated because he's had to continue to work even after the conclusion of school -- preparing for next year, choosing music and organizing instruments, that kind of thing -- and I'm still pulling most of the weight caring for Olga. We're going to work on helping each other balance things a little better. Life is all about balance, right?

Oh -- we had a bit of excitement last night. Someone knocked on our door about 9 p.m. when Dave and I were watching TV. Dave opened the door, and a young guy was standing in the hall, breathless. Our neighbor also opened his door, which made us think the young guy had knocked there too. He said he "had a problem" and asked to come in. Dave, with Olga and I standing behind him, sensibly said no, and our neighbor also closed his door again. So the young guy ran upstairs and we heard him in the fire evacuation hall that leads to the next stairway. About two minutes later, two police officers came huffing and puffing up the stairs, and we heard them in the fire hall, clearly in pursuit!

Eventually a police car and about six officers were swarming around our parking area, and I believe I heard them say they caught the guy. I went downstairs to talk to some neighbors who were clustered to watch the commotion, but nobody knew what was going on. I'll have to ask around today.

(Photo: Standing out in Denmark Hill, south London.)
Posted by Steve Reed at 6:58 AM

The reporter in you will get the story!

Nice to know you've still got a nose for news and I'm glad you're both okay. Congrats on the new family member!

I love the name Kate. It sounds definite and cheerful. Maybe because of Kate Hepburn. I don't know. Anyway, how lovely that you'll get to meet a new baby.
And what excitement in the hallway! Glad that Dave didn't let the guy in.
I'm looking forward to your posts from this side of the pond.

Even you had a weird day yesterday!

Hey congrats on your new niece.

I love it when you're in Florida because it means we're on the same continent. I know - it's not rational.

New babies are fun- floppy...they don't do much at all- little lumpkins. My middle son and his family are in Florida for the summer- finding it unusual and fun so far, I have their bird. You will get to thaw and see stars maybe! Nice change.
I SO would have let that lad in...I am a fool! Curious as to what sort of shenanigans he was up to ...

ooohh, I don't think I would have opened the door. I'm glad he didn't try and force his way in. I'm sure you'll find out what happened!

When do you leave for FL? Congrats on the new niece.

Mike usually has school stuff to do all the time - even when he's not teaching. It IS annoying!

Congrats on the new niece!

Whoa. The only time anyone knocked on our door, it was the guy selling tea towels and household cleansers. Yikes! And my god, how did he get in your building? I seem to recall it being a fortress.

Welcome Kate. And have a fun trip to FL!