Benjamin Britten in a Medieval Church 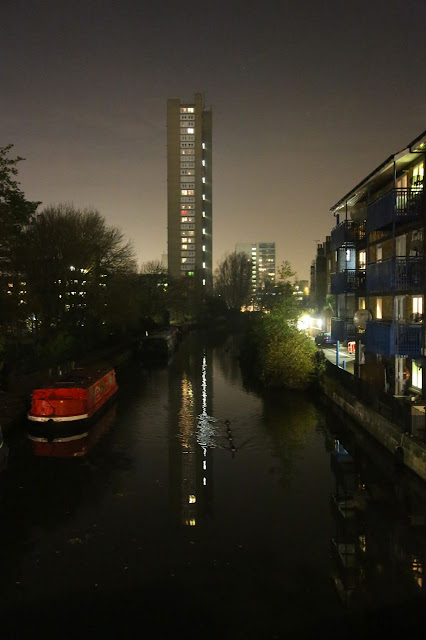 Last night Dave and I went to hear some Christmas music -- a series of choral pieces by Benjamin Britten -- at the medieval Priory Church of St. Bartholomew the Great, near Smithfield market. We went with our coworkers Gordon and Keith, and Gordon's wife Donna, and the singing by a small choir of eight, accompanied by a harpist, was truly remarkable -- crystalline and seemingly effortless.

Interspersed with the music were readings about Christmas, a brief prayer and some hymns, which I sang with difficulty because they were pitched right at a point where I was either forced to range too high or too low on the scale. They included "It Came Upon A Midnight Clear," which the British sing to a completely different melody, a fact that once again managed to surprise me.

We went to this same church with Gordon and Donna last year, and it's interesting to think we've been here long enough to have created a tiny bit of Christmas tradition! (How many times do you have to do something before you consider it a tradition? Is twice enough?)

I sat listening to the harp, gazing up at the stonework that dates back hundreds of years (the church was founded in 1123, not long after William the Conqueror came ashore!) and felt I could understand the appeal of religion as a common thread that connects us with our ancestors. I thought of all the hundreds or even thousands of people whose eyes had gazed upon the very same stonework, maybe by candlelight or whale-oil lamps. Over our heads hung a memorial plaque featuring the busts of a man and a woman, and part of the inscription read:

So when the music ended we went off to a nearby pub called the Old Red Cow, where we had dinner and a couple of pints, talking and laughing while squeezed around a tiny table in a crowded upstairs room with steamy windows.

(Photo: A completely unrelated photo of Trellick Tower, reflected in the Grand Union Canal. I love the line of little ducks swimming in the tower's reflection.)
Posted by Steve Reed at 7:06 AM