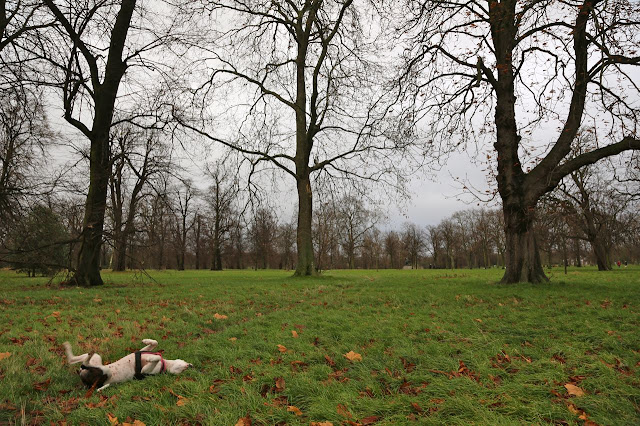 It was wet and dark, dark, dark here yesterday. The sun rose after 8 a.m. and set before 4 p.m., and in between the sky looked like this (above). None of that stopped Olga's celebratory grass-rolling in Hyde Park, though. That's why it's great to have a dog around -- they get so much joy out of life, even in what we fussy humans might consider a less-than-ideal situation.

In addition to rolling during our park outing, Olga engaged in an extended game of Kong keep-away with a black lab named Nero. The squirrels seemed to be tucked into their nests somewhere, because we didn't see many, but Olga had a great time chasing her Kong, and allowing Nero to chase her in a futile attempt to capture it. 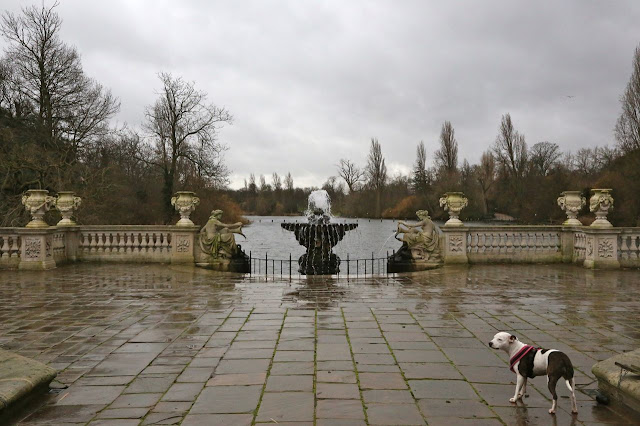 Then we stopped at the Italian Garden, with its paved piazza of pools and fountains, virtually devoid of people. Overall, Olga got filthy and wet but wasn't discouraged until it really began to rain, just as we were walking home, and then she made a beeline for our building, pulling me behind her.

On Friday night I got a kick out of watching Pee-Wee Herman's Christmas Special from 1988 on YouTube. What a blast from the past. Did anyone realize at the time how gay that show was? Many of his guests were and still are gay icons, from Cher and k.d. lang to Whoopi Goldberg and Grace Jones -- and then there's Pee-Wee himself, who might not have been exactly gay but certainly seemed like he could be. (I mean the character, as opposed to the actor who played him.) I didn't really watch the show much in the '80s -- I was in college or working and had more pressing things to do, like go to Goodwill -- but now I wonder what people were thinking. I honestly don't remember, though I do remember some of my gay friends were big fans.

It seems like maybe it was a big inside joke -- gay for people who were aware, who understood camp, but just zany and silly for those whose cultural compasses were dialed in a more oblivious direction.

Anyway, it was a hoot to watch. Charo! The Del Rubio Triplets! Zsa Zsa Gabor! What's not to like?
Posted by Steve Reed at 7:24 AM