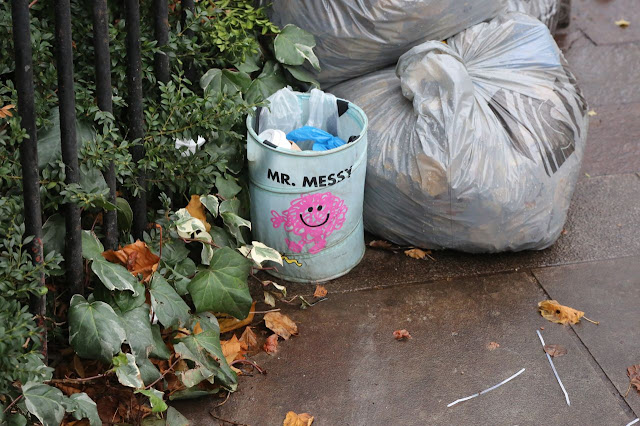 Olga and I met our pal the window-washer on our walk this morning. He told me he'd just come across a guy slumped in front of a nearby shop, wearing no jacket, in the early morning darkness. He bent to shake him awake when another guy approached, said he knew the first guy (whose name is Chester) and would take care of him. So the window-washer departed on his rounds.

Sure enough, I came across Chester and his friend a few moments later -- Chester still slumped but moving, the friend calling out and insistently knocking on someone's nearby door. The friend eyed me (and Olga) but did not speak to us. I think they were drunk or otherwise impaired. It made me think the window-washer was somewhat brave to shake Chester and try to wake him. I think if I'd found him slumped on the sidewalk, I'd have left him there -- though I'd have called the equivalent of 911 if I'd believed he was in distress. Maybe not entirely a reaction in the Christmas spirit, but you have to be careful about these things, especially at 5:30 a.m. on a dark street.

Anyway, that was kind of a story that went nowhere, except to show you that my Grinch heart is two sizes too small. Sorry about that.

My Christmas angst has diminished. I got some things done yesterday and now I feel at least better prepared. Families are so complicated -- the stereotype is that couples get married and have kids, but instead often pre-existing families are brought together by a single relationship (a la "The Brady Bunch"), which leads to sudden gift-giving requirements on a wider scale. Know what I mean?

Today Dave and I have a faculty/staff holiday party at work. The good news is: the library closes early! Woo hoo!