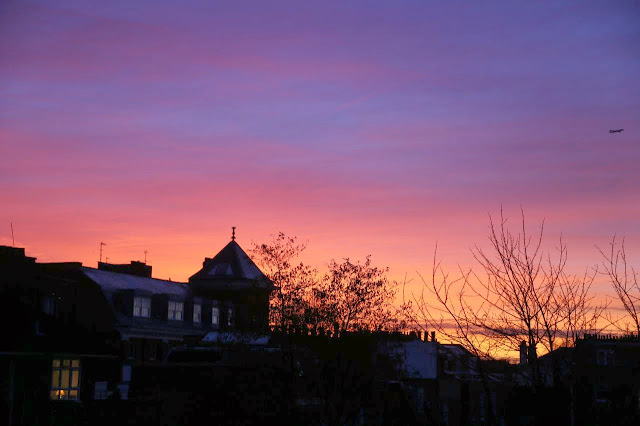 This was the sunrise on Friday morning, pink and purple slowly giving way to brilliant orange. It lit up the inside of our apartment with the most peculiar golden light.

We're not far from one of the airport flight paths -- I assume it's for Heathrow, which is southwest of us -- so any time I stand at our balcony door I see lines of planes coming and/or going. You can see one in the photo above, far to the right, and there are at least two in the photo below. 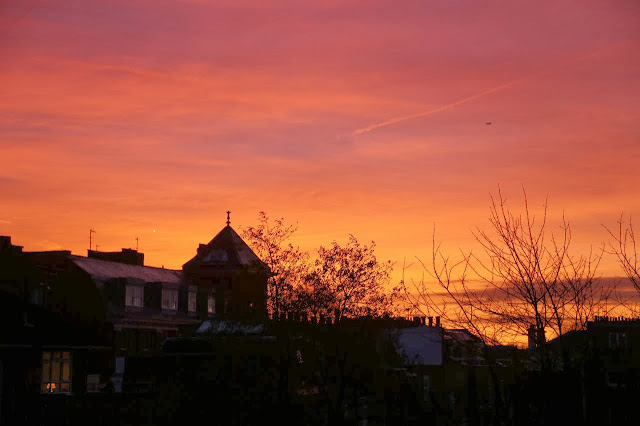 As the sky brightened, I got to thinking about a song I loved 20 years ago, "Talk To Me Like The Sea," by Everything But The Girl. I used to have it on a mix tape given to me by my friend Liz while we were in the Peace Corps. I hadn't heard it in ages, but I remembered a line about planes flying out of Heathrow in the early morning light. How appropriate!

At least it seemed so, until I looked up the lyrics to the song, which showed I slightly misremembered them:

Well, I was close. They still seem like magical words -- poetry evoking distant locales and the excitement of travel. When I first heard them I hadn't been to Heathrow. I certainly never imagined I'd someday live within view -- but thankfully not earshot -- of its flight path.

I'd tried to find this song on iTunes several times, and it was never available -- until yesterday, when I checked and there it was. Now it has taken up residence on my iPod.
Posted by Steve Reed at 7:44 AM

That song was like a portent of your future. How odd. How lovely.

I can never hear the lyrics in songs. It's the music that appeals - or doesn't.