A Disney Pilgrimage (Not Mine) 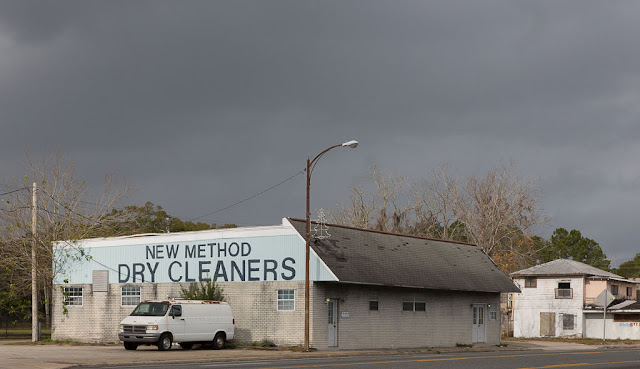 I can't believe I forgot to tell you about one more element of our flight to Florida. While Dave and I were waiting at Gatwick Airport for our gate to be announced, we saw a family of about a dozen people, at least three generations, all dressed in Disney gear. The women had Mickey cardigans and t-shirts that said "We're going to Disney." The men had t-shirts a la NWA that said "Straight Outta Disney" and their names on the back. There were uncles and grandparents. A few of the girls were wearing mouse ears.

Dave said, "I bet they're on our plane." And sure enough, they were -- about ten rows in front of us. I wondered if they'd bought a tour package that included all that gear, or if they won a contest or something. Anyway, they seemed to be having a ball, and I didn't begrudge them their fun, even though like many Floridians I have mixed feelings about the Disney juggernaut.

Most of Florida has nothing to do with Disney and looks more like the scene above, from small-town Starke. Our drive up to Jacksonville yesterday was pretty effortless. We got started a bit late and then dillydallied along the way, taking a few pictures and stopping for food. We ordered breakfast at McDonald's (the same one I worked at as a teenager, in Pasco County) and they completely bollixed up our order -- somehow we emerged with two extra sandwiches and an extra hash brown that we didn't pay for. It seemed very American to be deluged with surplus fast food. 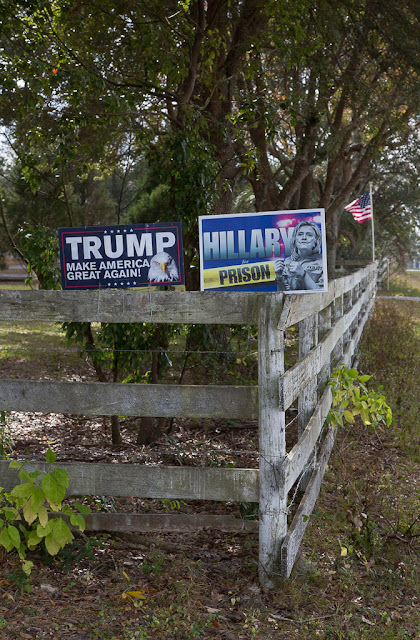 Rural parts of Central Florida are very Red State, and we saw lots of signs like the ones above, along with Jesus billboards and anti-abortion advertisements. I read them out loud to Dave just to annoy him.

We finally got to Jacksonville about 2 p.m., and had champagne on my brother's back patio, sitting in the wooden Adirondack chairs that he built himself using a pattern he created himself by studying an old chair my mom owns. He's always been much handier than I am. Everything I built in shop class wobbled.

We had dinner, a fabulous crock-pot roast, and brownie cupcakes topped with very pointy strawberries resembling Santa hats. (My older niece made those.) We briefly exchanged gifts. Then Dave and I hit the road and came to a nearby Ramada Inn, where we're camped out in Room 177. 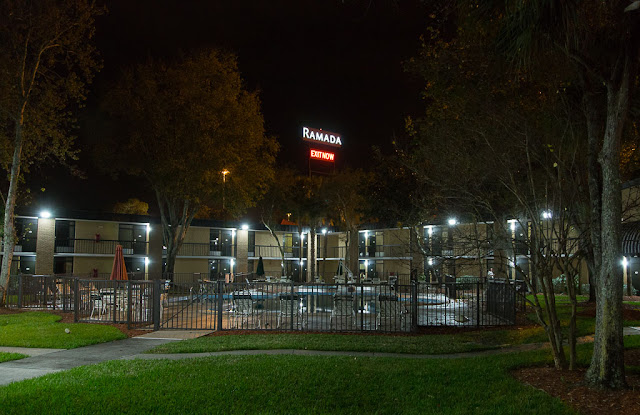 It's a very '80s motel, low and beige, with a pool that we will probably never touch because we'll be out all the time with the family. We have a hyper-effective air conditioner the size of a small refrigerator beneath the window in our room, creating a steady white-noise whoosh and quickly rendering the space Arctic.

I rarely stay in a motel on my Florida trips but with Dave here too, we figured it would be better not to impose. Besides, we're still adjusting our internal clocks and sound sleeping is a requirement!

Last night we watched "The Sound of Music" on TV and I could barely keep my eyes open. The minutes those kids made it over that windy mountaintop I clicked off the TV and was out.
Posted by Steve Reed at 12:23 PM