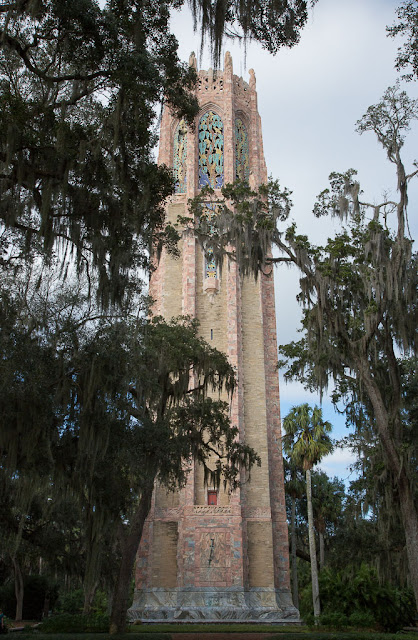 With a spare day at our disposal yesterday, Dave and I left Jacksonville, drove down through Central Florida and wound up at Bok Tower Gardens, one of my favorite places in the whole state.

Bok Tower was the creation of Edward Bok, the editor of Ladies Home Journal, who in the 1920s -- after wintering near the small town of Lake Wales -- decided to create a bird sanctuary there. He brought in Frederick Law Olmsted to help design the gardens, and architect Milton Medary to design a grand Gothic bell tower of coquina stone and gray and pink marble. In 1929, it was dedicated by President Calvin Coolidge. 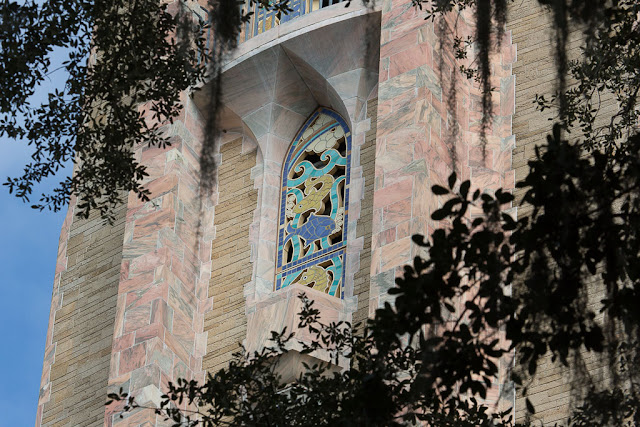 It was one of Florida's original tourist attractions, long before Disney World was even a twinkle in Uncle Walt's eye. I love the way it combines an enthusiasm for nature and conservation with strikingly beautiful architecture and music -- there's a 60-bell carillon in the tower. (One of the reasons why I thought it might appeal to Dave.) 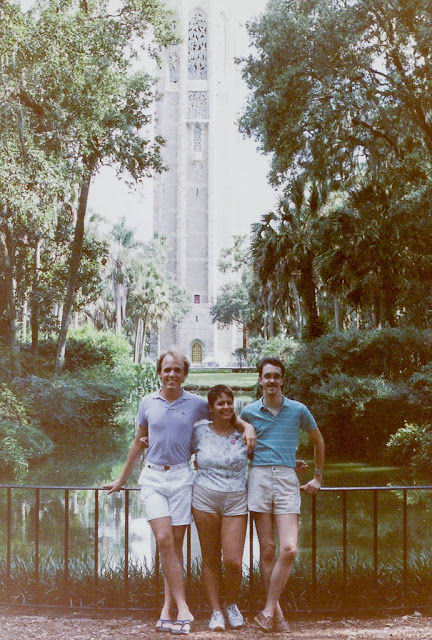 I first came to Bok Tower in college. Here I am in 1986, on the left, with two of my oldest friends from high school, standing in the tower's shadow. (I had more hair then!) Before yesterday, it had been decades since I'd visited. I'm not even sure when my last visit was. 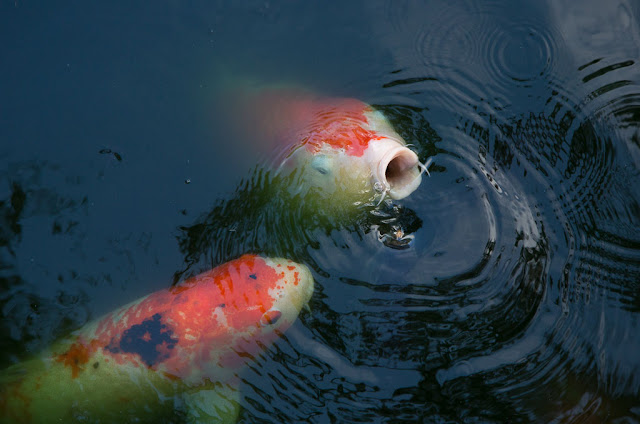 Dave wasn't feeling great yesterday, but he did enjoy the gardens. When the tower bells aren't playing, all that can be heard are the birds and the rush of wind across Iron Mountain, the highest point in Central Florida.

Dave amused himself by feeding the koi in the pond around the tower. A little girl asked him what he was feeding them. "Fish food," he replied. I promptly added, "You can get some in that machine over there for a quarter." Which of course caused the girl to whine to her parents: "Pleeeeeaaaaasse Mommy, can't we get some fish food?"

"Oh, that man shouldn't have said that," her mother said, casting me a dirty glance. I think she was half-joking. But only half. (The girl did wind up getting some fish food and having a koi experience.) 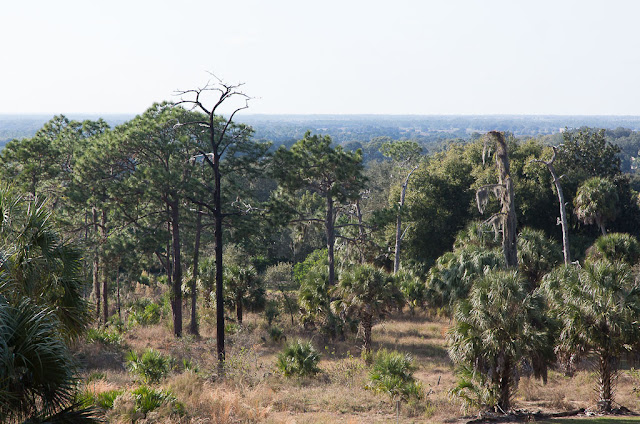 The gardens are carefully landscaped, but they're surrounded by acres and acres of wild Florida scrub. Scrub is an under-appreciated ecosystem -- dry and sandy and thorny -- but I think it's beautiful. 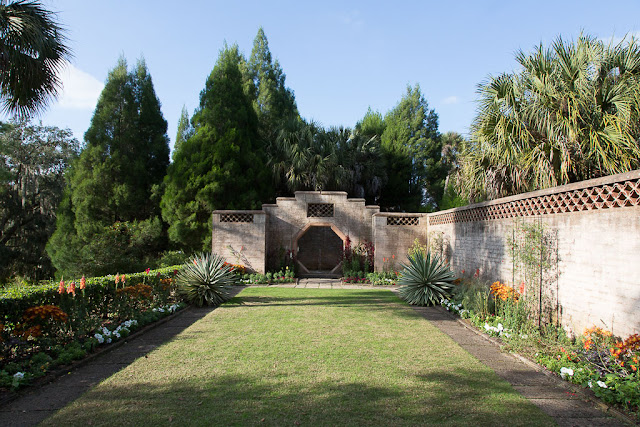 There's also an adjacent mansion, Pinewood Estate, built in the 1930s for a vice president of Bethlehem Steel, with gardens and furnishings intact. We didn't go inside, but the surrounding landscaping is beautiful and worth a wander. I'd never been to the mansion before -- in fact, I'd never heard of it, though apparently the house became part of Bok Tower Gardens way back in 1970. How did I miss that on my previous visits?!

We spent last night in Winter Haven, in a very retro '60s motel with tropical plantings and aqua-colored bathroom tile. A bargain at $65 a night!
Posted by Steve Reed at 12:22 PM

I too love that place though it has been twenty years or almost since I have visited. I hope Dave feels better quickly and is able to enjoy your cruise.

I've now added Bok Tower to my list of places to go when we snow-bird to Venice in January. (Love those 80s shorts!)

Was that koi carp singing or was it simply asking for a kiss? Interesting how the colour of your old college friends photo appears unauthentic and dated... like an antique picture and suitably reflecting the passing of time.

the parents were really annoyed over a quarter? if I ever get Florida again I'll have to try and remember this place. I love small independent quirky motels.

I love Bok Tower! Haven't been in forever and ever. It's such a peaceful, lovely place!
Winter Haven! Ah...the memories.

That tower is amazing, especially with all of the trees with the Spanish moss all around.

Also, 1986 was a styling year. I wasn't alive, but... Wasn't that the year everybody was dressing like Don Johnson?

What a peaceful looking place! I would love to be right under the tower when the bells go off! Musts really be something to hear.

Laramie has quite a few old-style little motels. I've always wanted to see inside the rooms of a couple of them. The town also has huge murals painted on the old building that I know you'd love.

Oh my gosh, this brought back memories! I visited there back in the early 80's. I remember it as a beautiful place with lots of birds and squirrels. I remember the squirrels because one crawled up my bare leg until I let out a yelp. I remember enjoying the music when it played and the sounds of nature when it didn't.

That tower is gorgeous! I love the colors...

Thanks for sharing these beautiful gardens. That picture of you from the eighties is a hoot. I had forgotten how short shorts used to be.

What a beautiful tower!

I didn't realize that Florida even HAD wild scrub; granted, my knowledge base of Florida is quite poor - pretty much confined to a couple of blogs :) - but I wouldn't have expected something this dry! Ya learn something new every day.

Never been to Florida and of course it always gets such bad press. thank you for posting this. I had no idea that Florida had anything this cool! Best wishes that you both stay well on your trip!

The bok gardens look like something well worth while a look.

That looks like an exceptionally peaceful spot. My wife's sister lives in Venice Gardens but not nearly as nice as Bok Tower Gardens

I'll take the Bok Tower over Disney World any day!