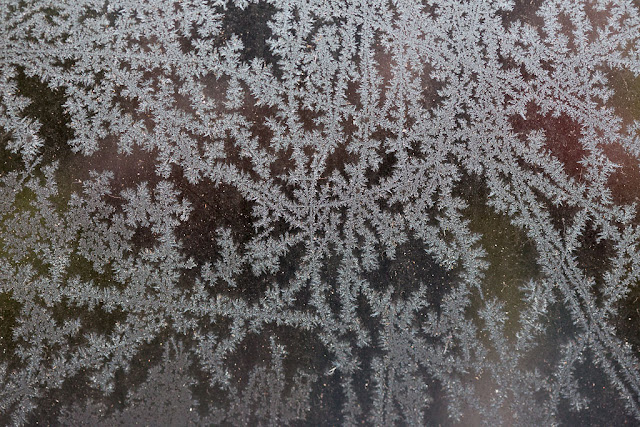 Temperatures were below freezing yesterday morning when Dave and I got up. The garden plants were silvery with frost, and the windows of our neighbors' cars were covered with criss-crossed patterns like trails left by tiny ice skaters.

Dave didn't work yesterday because he had some follow-up medical appointments related to his hospitalization earlier this year. (No great surprises, fortunately; just more tests and monitoring.) One side effect of his staying home is that both of us could walk Olga in the morning, which we never get to do together. This was the sunrise view over the nearby tennis club. Those houses on the right are actually on our street; they're the back side of the ones across the street from us. If you can picture that.

Anyway, we had a good walk and I got to show Dave the morning routine that Olga and I share, which was kind of fun. Then I was off to work, where later in the morning I got another walk -- to the bank, to get change for our lost-book cash drawer.

In the evenings, having finished "The Crown," Dave and I have moved on to "Eyewitness," a crime drama from the USA network featuring a gay subplot. I read about it on another blog and I like the show, but Dave is a little lukewarm about it. (He's a tough critic.) So last night we tried "Firefly," the science fiction show from about 15 years ago that's most famous for having been prematurely canceled. We'll probably be watching those shows for the foreseeable future! (And hopefully I can continue to squeeze in episodes of "The Wire," but Dave really doesn't like that, so I have to wait for nights when he's not around or otherwise occupied!)

Marriage -- it's mainly about compromise on TV viewing and food!
Posted by Steve Reed at 6:28 AM