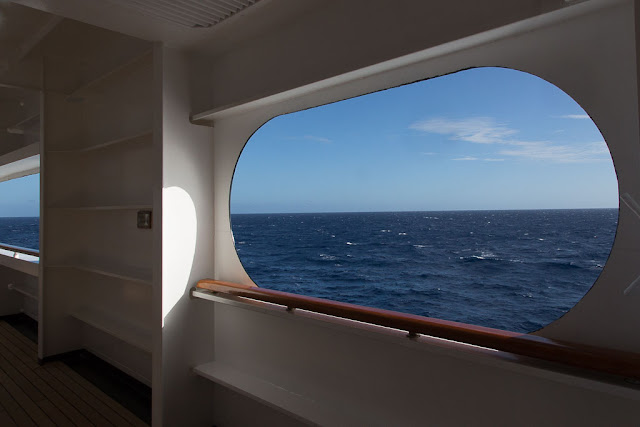 This was our view all day yesterday — water and more water. And sky.

(Have I ever before lived an entire day without seeing any land? I’m not sure!)

Specifically, the photo above shows the view from the Promenade Deck, which — as its name suggests — includes a walkway that circles the deck of the ship. Three times around the deck equals a mile. Yesterday, after breakfast, I started walking laps to get some exercise. I walked at least two miles, but maybe more, because I lost count of how many times I went around! It was super-windy and I got spray-coated by a mist of salt water.

Maybe that wind is part of the reason that the seas got a bit rockier yesterday. I’ve discovered that I’m not susceptible to seasickness, which is a relief! In fact, the motion was kind of comforting — like being rocked in a hammock. (I’m sure there’s a threshold at which I would feel sick, and let’s hope we never reach it.) 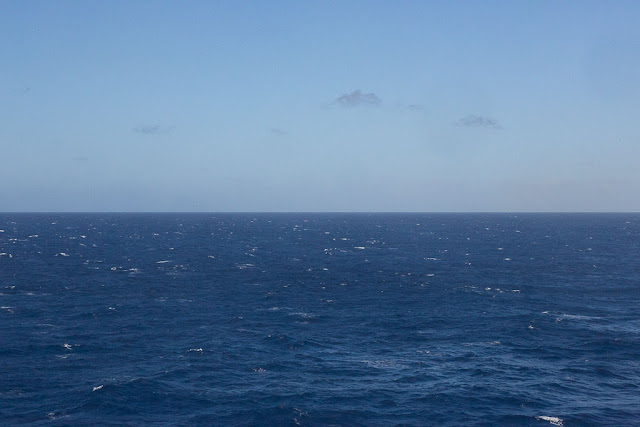 The fact that yesterday was Christmas barely occurred to me, despite the poinsettias on our dining tables and the omnipresent Holiday Classics soundtrack playing in the ship’s public areas. All the crew members are wearing red Santa hats, but I’ve come to think of them as just part of the uniform.

Dave and I had breakfast, lunch and dinner with the family, and we all played afternoon trivia in the scenic Crow’s Nest bar. We didn’t win, but we didn’t badly lose, either. And let me just say, a couple of gin and tonics make navigating the decks of a rocking ship an interesting experience!

After lunch I sat up in the Crow’s Nest and read “H is for Hawk,” a memoir by a woman who’s fascinated by birds of prey — especially goshawks. It’s partly about falconry and partly about larger issues of life and death and growth. I haven’t yet decided whether I like it. It’s well-written, but falcons and hawks are less my thing than hers — the idea of putting a hood on a wild bird’s head and subjugating it to human whims seems a bit cruel to me. 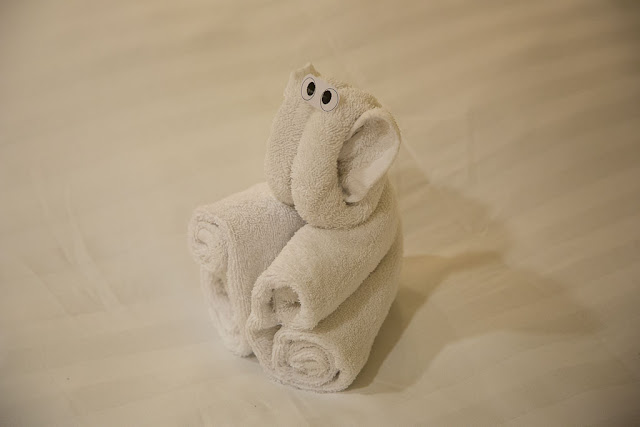 Speaking of wild things, here’s the animal of the evening! Any guesses? I thought it was a sitting elephant, but it doesn’t seem to have a trunk, exactly. Dave thinks it’s a monkey. Hmmm….
Posted by Steve Reed at 11:00 AM