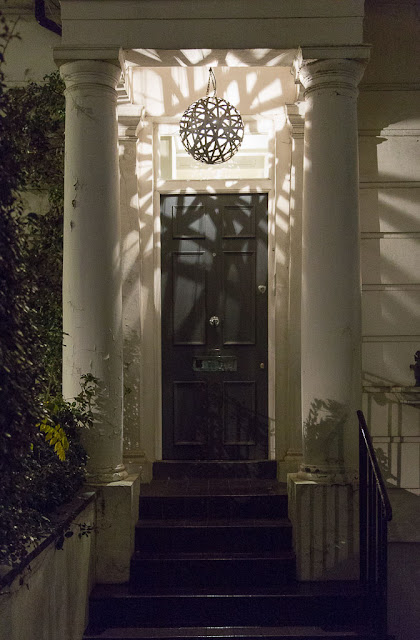 Workplace holiday dinner last night. Most godawful location ever -- the back alcove of a neighborhood pub, a space designed to accommodate about half the number of people who attended. I was squeezed into a tiny space between the table and the wall -- I felt like I couldn't inhale for two hours! As soon as the desserts were cleared, Dave and I were out of there. I can't wait to hear what my coworkers have to say this morning.

I honestly forgot all about the party until a coworker asked me yesterday afternoon, "Are you coming tonight?" I'd made reservations but that was weeks ago. I stammered, "Tonight? Oh, is that tonight?!" She looked at me like I had two heads. It's a good thing my calendar is so flexible.

Even though Dave and I were the ones who drank wine and ate processed turkey roll and brick-heavy Christmas pudding last night, Olga was the one who woke twice in the small hours of the morning, poking us urgently with her nose to let her outside. I'm not sure what that was about. At first I thought she just heard foxes, but I suspect she wasn't feeling well. Lots of people at work are also sick, with colds or worse. I'm wary of coming down with something on the eve of this trip to Florida and the cruise. It would be a drag to have a cold on the high seas!

(Photo: A doorway in Notting Hill, on Saturday night.)
Posted by Steve Reed at 7:57 AM