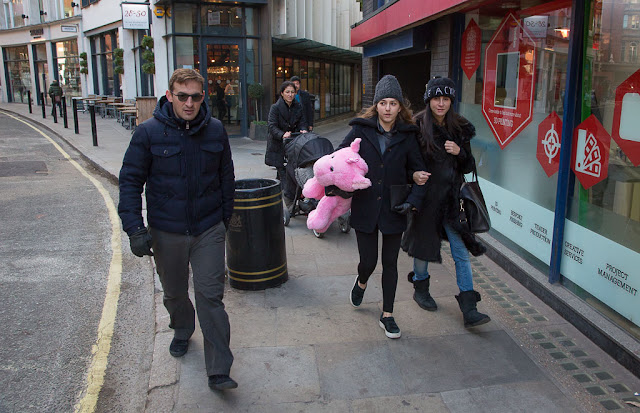 I slept in a bit this morning. I wasn't up until 6:45, which may not sound very late, but for me it's more than an hour past when I usually get up. I haven't been sleeping well lately. I keep waking up and thinking about problems in the library, and about the fact that the world is so crazy, armed men walk into pizza restaurants expecting to find children being held prisoner by presidential candidates.

The library problems are minor. There's a gaggle of ninth grade boys who always sit together during break and lunch times and who lately have been giving me fits -- playing computer games with jangly noises, issuing piercing whines from their cell phones and moving around books on the shelves just to annoy me. The problem is, there are so many kids in the library at break times, spread out over such a huge area of the floor and all the tables, in a kind of amoebic, amorphous mob, that it's hard to tell where the troublemakers begin and end. So I can't just throw them out of the library, for example, because I can't tell exactly who's involved. I did catch the book-movers red-handed and reported them to their dean.

I'm sure this sounds like minor stuff, and I suppose it is, compared to schools where students are carrying weapons and beating up administrators. But it still makes me nuts. I don't want to be a cranky librarian, but I find myself falling into that role so often.

And then the pizza thing! And not just the pizza thing but all the problems it seems to embody, from the scourge of fake news to a gullible, armed populace. I mean, what kind of a world have we become? Who would seriously consider believing that Hillary Clinton is holding children hostage as sex slaves in a Washington, D.C. pizza restaurant? Isn't it ridiculously absurd on its face? It's almost like there is no reality anymore -- like we've entered the pages of our own dystopian fiction and are acting out the plot in real time.

It just makes my head spin.

(Photo: I really did see a big pink unicorn near Oxford Street, on Saturday.)
Posted by Steve Reed at 7:22 AM