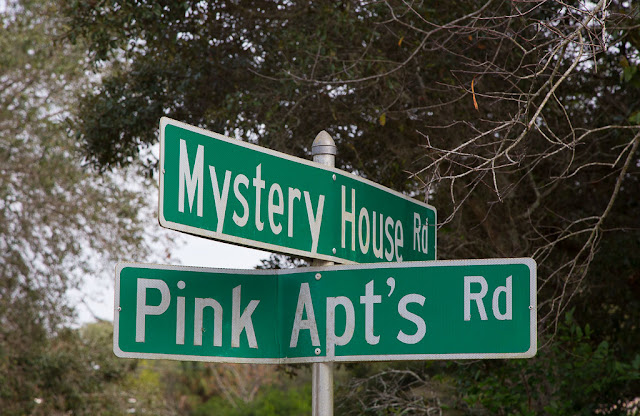 I mentioned yesterday that we stayed in Winter Haven on Wednesday night. It's my old stomping ground -- I lived in Winter Haven from December 1988 to February 1991, reporting for the local newspaper. It was my first job right out of college. For about a year and a half, I covered four towns on what's known as The Ridge, a citrus-growing hilly area east of "Haven," and then I covered Winter Haven itself.

I don't get back to this part of Florida very often, so as Dave and I traveled to Bok Tower on Wednesday, we took a little detour through those four Ridge towns: Davenport, Haines City, Lake Hamilton and Dundee. We had lunch at Melonie's Cafe in Dundee, which has been there forever, and I found what is possibly my favorite street intersection in the entire state, just outside Davenport. Aren't those great names? (For the record, I think the sign is slightly wrong -- according to maps, and my memory, it's Pink Apartment Road, singular, not possessive.)

There are several peculiar place names on the ridge, like Lake Confusion, just west of Haines City. I always meant to do a story about how they got their names -- but I never got that project off the ground. So why Mystery House Road is so named, I haven't got a clue, but I assume there was once a pink apartment building in the vicinity somewhere.

Anyway, as we drove through this area I showed Dave some of the sights and told him some stories -- about the huge fire that demolished several buildings in downtown Haines City, and the recall election that upended politics in Dundee -- but he wasn't very into the tour. By his own admission, he doesn't see the appeal of revisiting his (or anyone's past). He just doesn't have an interest in bygones. I remember when we went to Michigan the first time, I had to ask him to show me places he used to live and frequent. For the same reason, he's not much into pictures either. I, on the other hand, love seeing where I used to live, and we know how I feel about pictures.

In Winter Haven, I found a store named Reed's Grocery (no relation, as far as I know). And even better... 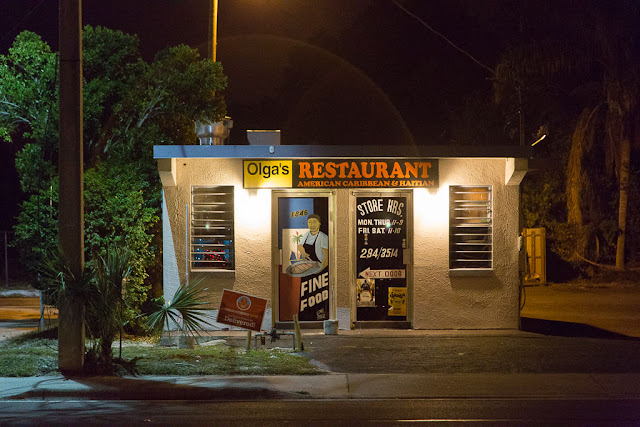 Yesterday morning, we drove from Winter Haven via the bustling cosmopolis of Wauchula (☺) to Dave's parents place in Bradenton, and stayed there last night. Their mobile home park is right on Sarasota Bay, and I spent some time yesterday on the waterfront taking photos. 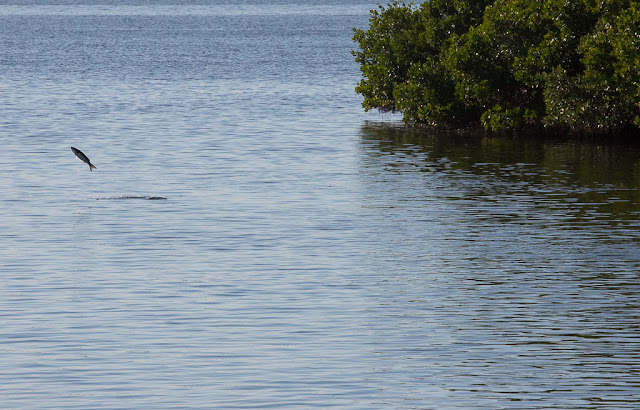 My goal was to get a photo of a jumping fish. Do you know how hard that is? By the time the fish makes any noise it's practically back in the water. I had to point my lens at a busy stretch of bay, wait for something to happen, and be quick with the shutter. Fortunately lots of them were jumping, and finally, I got a few shots. Not exactly National Geographic, but still. 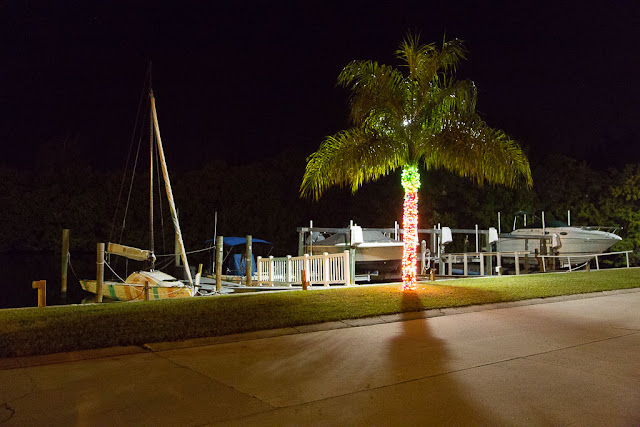 Today we're driving back to Tampa to board our cruise ship. So I'll be coming to you tomorrow (hopefully) from the open seas! I don't know what the Internet connection will be like but my goal is to keep blogging each day, and hopefully I'll be able to catch up on some blog-reading too. I know -- I'm behind!
Posted by Steve Reed at 12:36 PM