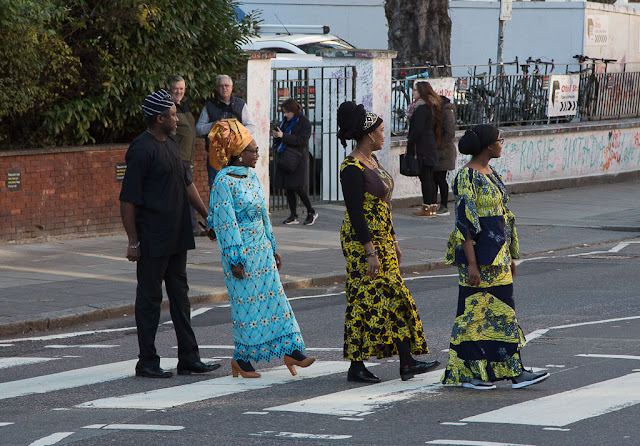 The other day, as I was walking past the Beatles crosswalk on Abbey Road, these folks were doing the famous John-Paul-George-Ringo pose so someone could take their picture. I love this. Is there any better testament to the universal appeal of the Beatles, and of music in general?

I only wish they'd been facing my direction. But I can't have everything.

So let's see -- what's going on around here? Winter, mostly.

We've run out of nuts and seeds for the bird and squirrel feeding saucer in the back of the garden, and I'd really rather not buy a huge new bag of it -- especially since I'm not sure it's a good idea to be feeding those critters at all. Most recommendations discourage pigeon feeding, and they are by far the predominant bird at the feeder dish -- though we get crows, too. We still have a gigantic, disgusting bag of dried mealworms, so I've been putting those out in the mornings, and they get eaten. But when they're gone we'll have to reevaluate the feeding saucer. It may be best to just use the hanging feeders, which attract smaller, more interesting birds.

I don't want things to starve out there, but I also don't want to encourage a pigeon population explosion. It's a delicate balance.

Yesterday I moved our sorry-looking marigolds off the front porch and onto the patio. Dave intends to do a garden cleanup this weekend, so they'll probably become mulch. It is time. 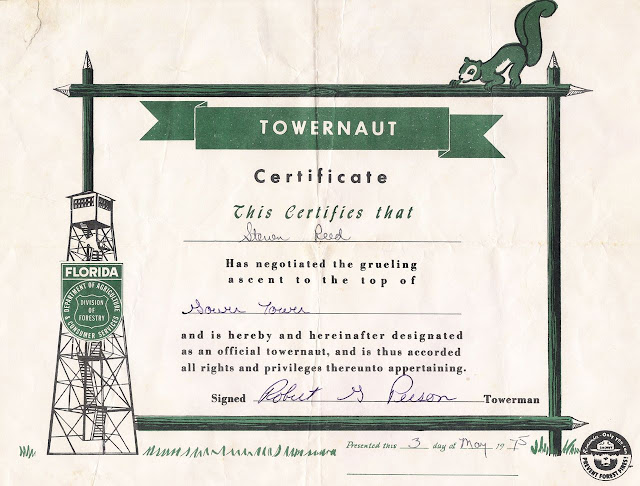 Apropos of nothing, I came across this certificate in one of my boxes of papers. I got it in third grade, when I and my classmates not only visited but climbed the Florida forestry lookout tower near Gowers Corner, in Pasco County. These towers were all over the state, used to monitor forest fires. I'm not sure this one even exists anymore. Can you imagine having a bunch of third graders traipsing up those stairs? Something tells me lawyers would frown on it nowadays! Anyway, it's kind of a cool certificate, even though they misspelled my name. (I'm a Stephen, not a Steven. It was a common mistake.)

I have very dim memories of that trip, and the experience of being up in the tower. But memory is a funny thing. Sometimes I wonder if I just think I remember it -- if every time I looked at this certificate I imagined what it would be like, and the imagination gradually became the memory. Know what I mean?
Posted by Steve Reed at 6:43 AM