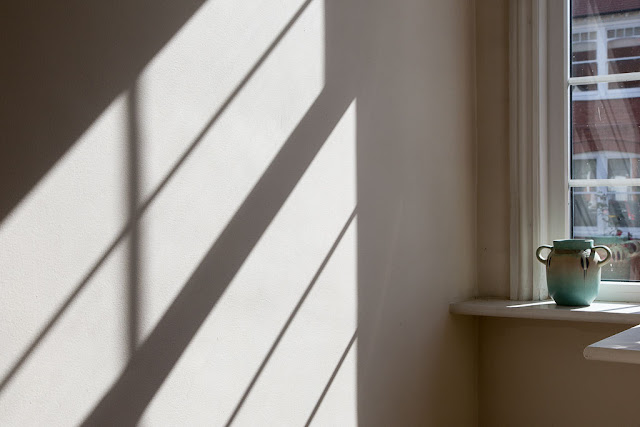 Yesterday was definitely a time for nesting and cocooning. Another beautiful day, but one tinged with sadness and incomprehension. I didn't leave the house all day, except to walk the dog around the block.

I get sick of trying to make sense of this crazy world. Every time there's an attack, I say the same things to myself and to you. They boil down to a succession of whys and hows and, in the end, of course, I have no answers. Because I'm trying to make sense of it with my rational mind, and terrorism is an inherently irrational act.

So, yeah, I stayed home, and I wasn't exactly depressed or anything -- I just worked in the garden and worked on my journal transcribing project and took pictures around the house. Olga didn't seem to want to go out anywhere. I think she was still tired from her walk the day before.

Deep down, I have been feeling a bit frustrated, though. Dave's health has been dodgy and he's tired a lot of the time, which severely curtails the kinds of things we can do together. He's unenthusiastic about travel or going anywhere or even taking a walk. He spent most of yesterday sitting on the couch plugged into his computer. I'm trying to be supportive, but I'm also feeling a bit like we're being too passive in the face of his Crohn's. We need to have a life, you know? We cannot let this illness tie a lead weight to our ankles. And it's taking a long, long time to develop a maintenance plan through his NHS doctors. We certainly appreciate the treatment, but it's hard to pass the low-energy weeks and months between appointments. (His next one is about a month from now.)

Am I being selfish? Probably.

Some of you mentioned my shirt in the last post -- some disparagingly, some enthusiastically. I'll have you know I love that shirt. I bought it in New York City about 12 years ago, from a guy selling them on the sidewalk on the Upper West Side near the Museum of Natural History. He made it using real leaves and some kind of wax-and-dye process, and I think it's awesome.

I'm stealing my post title from Woody Allen. Did you ever see the movie "Interiors"? It's one of Allen's serious films -- I haven't seen it in years, but I used to love it and its dramatic ending. Maybe I'll rent it this week, one of the evenings when Dave is at a student concert.

(Photo: Our front hallway, showing one of my grandmother's Roseville vases.)
Posted by Steve Reed at 6:51 AM