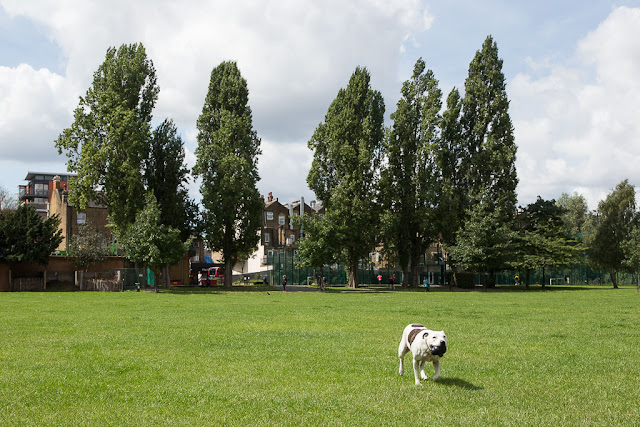 Thanks for all your feedback on yesterday's post. (Except for the Thai spam commenters who keep leaving links to mysterious football blogs that I suspect are actually phishing scams or something. You have been deleted.) I will certainly keep everyone up to date on our discussions! I hope I don't come across as a whiny brat -- I'm perfectly aware that I'm privileged to even be considering buying in this place and time.

Dave and I took Olga on a rare joint outing yesterday to Kilburn Grange Park. The Kong was enthusiastically pursued.

Oh, and speaking of the Kong, remember how it disappeared overnight from our back garden several days ago? Well, we gave Olga another one, and that disappeared too! This time I was really kicking myself, and then yesterday morning I saw it in Mrs. Kravitz's back garden, lying in the long grass. Apparently whatever fox absconded with it didn't get very far. Mrs. Kravitz and her family are away somewhere, so I wound up climbing over the garden wall to retrieve it. Let me just say: Climbing a garden wall is a lot harder than it looks. And then, as I struggled back over the wall to our own garden, a neighbor in one of the apartments behind us leaned out his window and said laughingly, "Everything OK, gentlemen?" He probably thought we were up to no good and was checking up on us. So we explained the situation and fortunately everything ended without the involvement of police or an ambulance.

I also bought two more Kongs from Amazon, just to be safe. And by the way, I grossly overstated their price the other day. I got two for about £14, so that's not so bad. 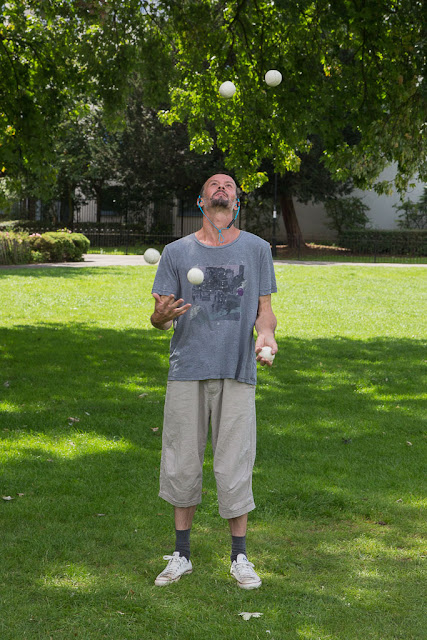 At Kilburn Grange Park, we came across this guy juggling five balls at once. Pretty impressive! Olga laid down next to him, because he was standing in the shade, but then she tensed up the minute he began throwing those balls around and I was afraid she would spring for one of them. We had to lead her to a less stimulating shady place. 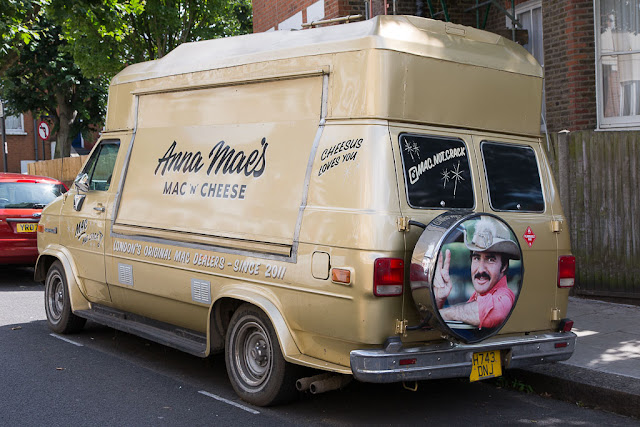 On the walk back home, we saw this. I love the Burt Reynolds tire cover. Unfortunately no mac n' cheese was being served at the moment, or we might have had some.

Speaking of '80s nostalgia, on Saturday I got a sudden urge to watch the movie "White Nights," from 1985, with Gregory Hines and Mikhail Baryshnikov. I don't think I'd ever seen it before. It was pretty good, with a youthful Isabella Rossellini and lots of Cold War intrigue. It's so weird to watch a film like that, produced when the Soviet Union seemed mighty and mysterious, and think that the country lasted just four more years. (Of course, it didn't go away entirely -- now we're left with its mysterious, meddling successor, Putin's Russia!) It was also great to see Baryshnikov and Hines dancing to Twyla Tharp's choreography. A worthwhile rental!
Posted by Steve Reed at 7:52 AM