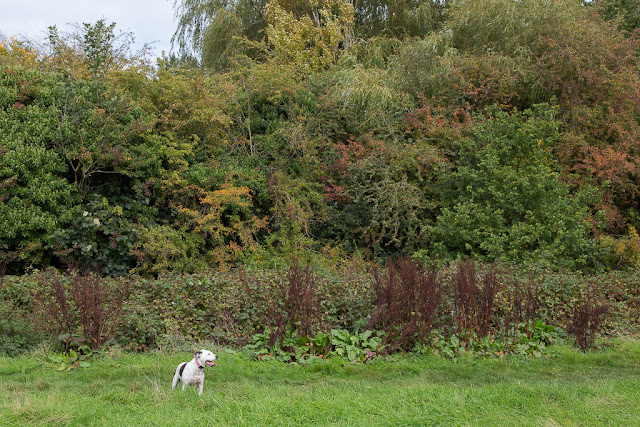 On Hampstead Heath, we're starting to see just a touch of fall color. It looks very autumnal, doesn't it?

I took Olga to the Heath even though my cold is still hanging around. Now it's all about congestion in my sinuses and chest. I honestly can't tell whether it's even still my cold, or something else entirely like a sinus infection. I don't have any kind of fever, so I presume it will clear up on its own. Meanwhile, I'm not going to take a London LOOP walk this weekend, as much as I want to. I'm going to stay home and rest.

That will give me a chance to archive my photos from the past month or so, a process that always seems to take a couple of hours. I weed out the ones I don't want and store the rest on a portable drive.

Maybe I'll also have a chance to try...my new metal detector! Yes, I have officially joined the ranks of crotchety old men. Dave bought me several early birthday gifts (my birthday isn't until November) and knowing how intrigued I am by the BBC show "The Detectorists," one of them is a metal detector. Woo hoo! He also got a Go-Pro camera (we may eventually see Olga's walks from her point of view, on "Olgacam!") and some new pajama shorts to replace the sadly depleted Doris shorts.

I feel guilty because I didn't buy Dave anything for his birthday in June. I took him out, and I told him I'd get him a drone or some new kitchen gear, but he never chose and I never pressed the point. Every time I try to get him something for the kitchen on my own, it turns out to be relatively useless. I'm a hopeless judge of kitchenware.

Anyway, last night we had a '70s movie extravaganza, watching "Jaws II" and "Airport '77." Pretty much my ideal movie-viewing experience. I remember going to see "Jaws II' with my friend Tony at the Varsity Six theater in Tampa in 1978, when I was 11, and I'm not sure I've seen it since -- but darned if I didn't even remember some of the lines. It's scary what the brain retains at that incredibly impressionable age.

(Photos, both taken yesterday: Top, Olga on the Heath; bottom, a close-up of a pigeon feather (I think?) found on the Heath.)
Posted by Steve Reed at 8:00 AM