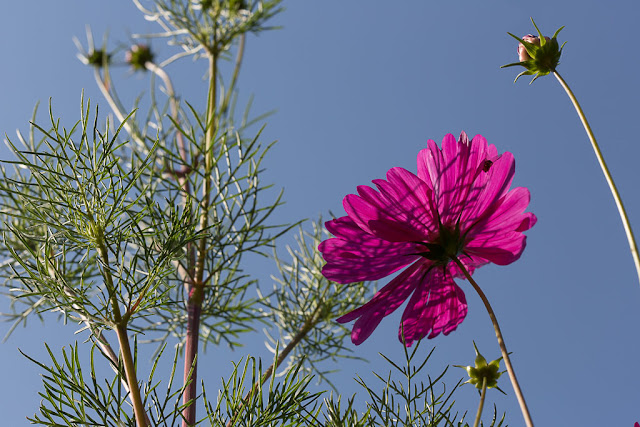 This is one of our cosmos. As you can see, they're finally budding and blooming -- this is probably the most productive of the several plants we have. I think I planted them in compost that was too rich -- they grew huge, almost as tall as I am (about 6 feet), and produced tons of foliage but they haven't been great about flowering. They are pretty, though.

I had a busy weekend. Aside from filming Saturday's outing with the dog and documenting the faces of Cricklewood, I mowed the lawn, cleaned the house, did laundry, paid bills and trimmed the garden. Whew! (Dave was working on music for his band students, so he was busy too.)

Speaking of Saturday, I got a special request -- OK, it was from Dave -- to upload my "director's cut" of Olga's GoPro video. This is a longer version of the one I posted Sunday, with different music and some ambient audio (barking!). If you feel inspired you can watch it here, but don't feel obligated because as I said earlier, it's 11-something minutes long and that's a lot of dog for most people.

I didn't finish all the reading I'd hoped -- in fact I'm still working my way through my third New Yorker and I haven't even started the Knausgaard book. I don't know why I have so much trouble sitting down and reading. Every time I do, a voice nags at the back of my brain: "Don't you have something more important to do?" Which is terrible! I love reading! Why do I feel it should be my last priority?!

Yesterday was a bear of a day at work. A parent called to complain -- not angrily, but just out of concern -- about a book we'd checked out to her fifth-grade son. Apparently the book contained too many references to drug smuggling and other crime for her taste. (Amazon says it's for readers 11 and over, so he's right on the cusp in terms of age.) Anyway, one of the librarians met with her and worked out a plan to give the kid more wholesome books.

Then we realized that the notebook we use to schedule library space for classes -- which I make up at the beginning of every school year, using specially printed pages gridded to show every class block from August into June -- was wrong. Apparently the school calendar I'd based it on was incorrect. Argh! So I had to remake it last night, which wasted half a ream of paper and kept me at work about 45 minutes past my normal time.

As Queen Victoria said, probably apocryphally: "We are not amused."
Posted by Steve Reed at 6:31 AM