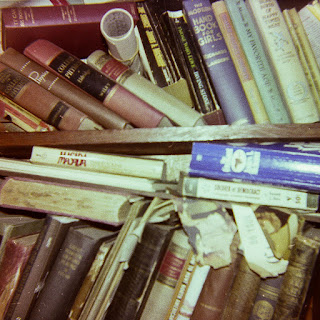 Yes, this is a terrible picture. A failed picture, really.

I took it almost 40 years ago, with my little point-and-shoot Magimatic camera and 126 cartridge film. It shows some bookshelves in my grandparents' house in Hyattsville, Maryland. I was trying to show the wonderful jumble on those shelves, with the books going every which way and rolled-up maps and random shreds of yellowed paper.

(By the way, don't ever store your books like this!)

I was reminded of this picture while reading Knausgaard. (I'm sorry I keep bleating on about this book but it's been quite thought-provoking. Fortunately I finished it yesterday, so this is the last you'll hear of him for the time being.) He describes cleaning out his grandmother's house following his father's death, and the chaos of stuff he encounters in every room. His grandmother's house was horrifically and disastrously messy -- my grandmother, by contrast, may not have been a meticulous housekeeper but she was basically clean.

I had to dig up this negative and scan it to get this image, having thrown out the print long ago. These shelves were on the second floor of the house, in a bedroom loft at the top of the stairs. It was mostly a storage area, where we kids slept when we visited. A huge box fan in the ceiling overhead drew fresh air through the house and served as the only air conditioning, aside from two strategically placed window units downstairs.

I loved those upstairs rooms, with their mysterious boxes and drawers, their venetian blinds and chests of old blankets and stacks of ancient National Geographic and Opera News magazines. The rooms had a distinct old-paper smell, not at all unpleasant. It was fun to browse the bookshelves and see what we could find -- paperback copies of "Christy" by Catherine Marshall and "A Woman of Substance" by Barbara Taylor Bradford, tucked amid older books by Stefan Zweig and Norman Vincent Peale. In the photo I see two James Michener paperbacks; Kenneth Davis's "Soldier of Democracy," a biography of Dwight Eisenhower; a ruined copy of "Masada"; a children's book called "The Blue Birds of Happy Times Nest" that must have belonged to my mother and uncle when they were young; some ancient physics textbooks; the "Modern Handbook for Girls," which it's hard to imagine either my mother or grandmother ever reading; and a book of inspirational poetry called "It Can Be Done."

After my grandmother died in 1989, my mother and uncle sold her house. They took what they wanted but left behind a lot of the furnishings, and I suspect what's in that picture went with the house and is almost certainly long gone. 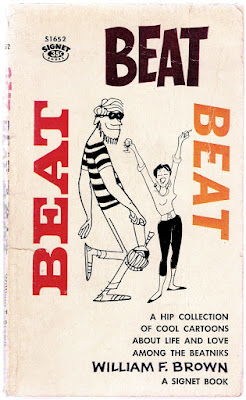 I only have one item from my grandparents' upstairs bookshelves, and it's actually from a different bookcase than the one in the picture. It's this incongruously hip paperback of cartoons from 1959. 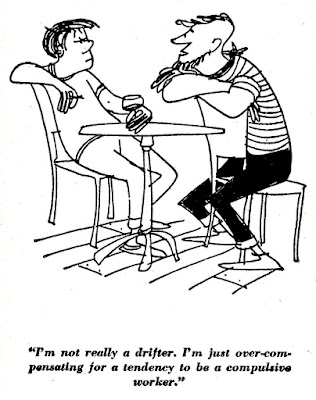 They're mildly funny -- more interesting for their time-capsule quality than their humor. I think the book belonged to my uncle when he was a teenager. I should let him know I have it. He'd probably get a kick out of that.

Anyway, even though it's blurry and badly exposed, maybe the picture isn't entirely a failure. It definitely evokes memories of those haphazard shelves, and it popped into my head immediately as I read Knausgaard's account of his own grandmother's house.
Posted by Steve Reed at 6:14 AM