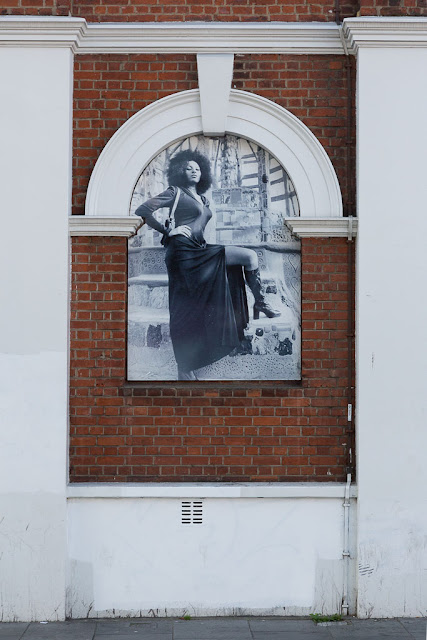 As I was standing in Brixton waiting for a bus on Sunday morning, I noticed a nearby cinema on Coldharbour Lane bearing giant-sized images of movie legends like Bette Davis, Sidney Poitier and Rudolph Valentino. Among them was this fabulous portrait of Pam Grier, of "Coffy" and "Foxy Brown" fame, taken at Watts Towers in L.A. in 1972.

Did you ever see Quentin Tarantino's film "Jackie Brown"? Grier was in that too.

Anyway, I couldn't resist a picture, and then I finally got on the bus and rode south through Tulse Hill toward Crystal Palace. Lo and behold, what should I see from the bus windows but this: 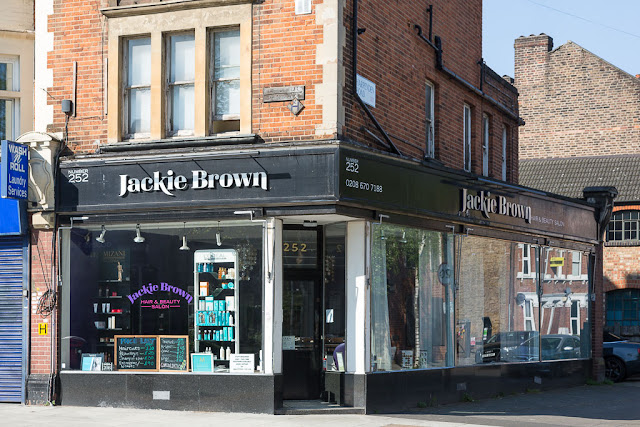 Is that a coincidence or what?!

Clearly the universe was trying to tell me that it was time to watch "Jackie Brown" again. So that's what we did last night. Dave had never seen it, and although I saw it in the cinema, that was 22 years ago (!) -- so it was time. It's just as good as I remembered, with terrific music. (I have the soundtrack among my iTunes.) Dave acted like he was going to die, being subjected to another movie suggestion from me, but in the end even he liked it.

Our Spring Break comes to an end today. Back to work as usual.We've done about all we can do in the garden, at least for the moment. Yesterday afternoon I took Olga to Wormwood Scrubs for a walk -- she dragged a little in the heat, once again, but then she found a disgusting muddy mire to wallow in, and that seemed to take care of the problem. 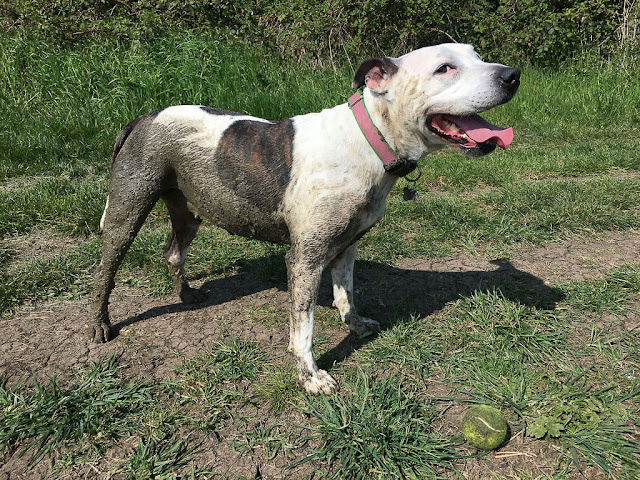 Doesn't she look proud of herself? Needless to say she got a bath later, but she was a spectacle on the train ride home.

I'm amazed she could find any mud, because it is dry out there. We haven't had rain in ages. I think that's going to change this week -- another sign that it's time to go back at work!
Posted by Steve Reed at 6:36 AM

She does look proud! Sweet Olga.
I don't think I've ever seen Jackie Brown. I'll be awaiting instructions from the universe to see it.

I haven't seen that picture of Pam Grier in ages. I don't think I saw the movie Jackie Brown. Olga looks like she has accomplished her goal. They announced this morning on the news that DT will be going to London in June. I bet it did not please the Queen to have to invite him.

I've never even heard of Pam Grier or the movie Jackie Browne. I've been thinking I'm experiencing memory lapses lately, and this might be one of them. Olga is so cute when she's muddy!

Oh OLGA, who does wear it best! Olga, always. I remember liking Jackie Browne, the dim bell rings, must watch it again, at the moment, having just purchased netflix, on Stella's orders I am binging on Grace and Frankie. Quippy, entertaining, Martin Sheen and Lily Tomlin are great, it took me a while to accept Sam and Jane, they are ...irritating.

We have Amazon Prime so I'll have to see if they've got Jackie Brown. That *is* an *outstanding* picture of Ms. Grier. Olga looks very proud of herself but I can imagine your fellow train passengers were none too pleased.

Crazy coincidence :) It's neat when that happens.

Oh, Olga! Yes, we see where your eyes are looking! Good job :D

I really liked Jackie Brown, and all things Tarantino.

Olga looks quite proud of herself it's a right of passage for all dogs to roll in the mud, as long as it's just mud and not something smelly.

I just love those crazy coincidences. Most of the time I don't think they are coincidences though. Just this morning I asked Pete about a couple of accounts that were his mother's that are being transferred into his name. Guess what came in the mail today? Info about both of them. Was that mud good and smelly?

I shall have to watch Jackie Brown then.

Vivian: Every once in a while as I'm walking Olga a British person will say, "What a nice bitch!" Or something of the sort. It always startles me.

Sharon: Yeah, I heard about DT's impending visit. Ye gods. I suppose there will be another big protest.

Robin: Ha! Well, if it wasn't on your radar when it came out, I can see how you wouldn't remember it!

Linda Sue: We watched Grace and Frankie for a while and I liked it OK, but there's not a whole lot of dramatic tension! I'm a huge Jane fan so I can overlook her irritating character.

Catalyst: I had to pay a small rental fee on Amazon but it wasn't much.

Jenny-O: Exactly! It's the eyes that give away her pride. "Look at what I did!"

Colette: I liked Tarantino for a while. "Pulp Fiction" is fantastic, but I tried to watch "Inglourious Basterds" and found it a slog.

Comox: She rolls in mud all the time, but she seldom brings this much of it home with her!

37P: Absolutely! I think you'll like it! There's probably a discussion to be had about how much it plays to black stereotypes, but it's meant to be an homage to the Blaxploitation films of the '70s -- so the lingo and the accents and the criminality are all connected to that overarching vision.

Interesting! I haven't seen "Hitman." I need to look for it!