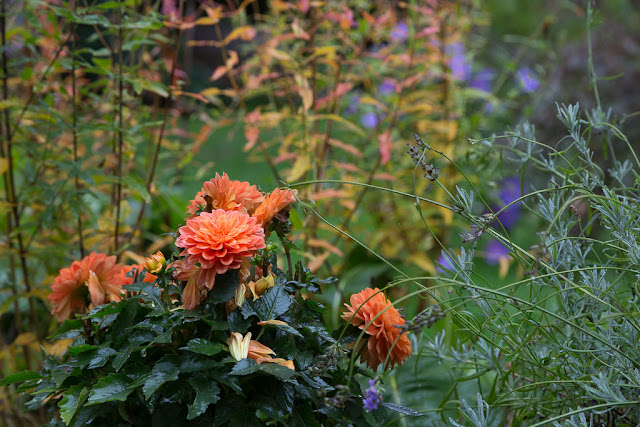 That dahlia in the foreground above was bright red when I first bought it several weeks ago. Now it's faded to a gentle orange as the flowers begin to fall away, petal by petal. It matches the orangey-red loosestrife leaves, the purple flowers in the background and the lingering lavender. Very autumnal!

Dave and I went to see the Downton Abbey movie yesterday. I liked it a lot, but I definitely had to suspend my critical thinking skills in order to swallow parts of the plot. It was beautifully filmed and especially fun to see all the characters again. We went using a gift card from one of Dave's students, given to us at the end of the last school year, so we didn't even have to buy our tickets. (Except that the card covered the cost of two tickets in June, and I guess they've gone up a bit -- after I used it there was still an unpaid balance of 20 pence, so I had to put that on my debit card! Ridiculous.) 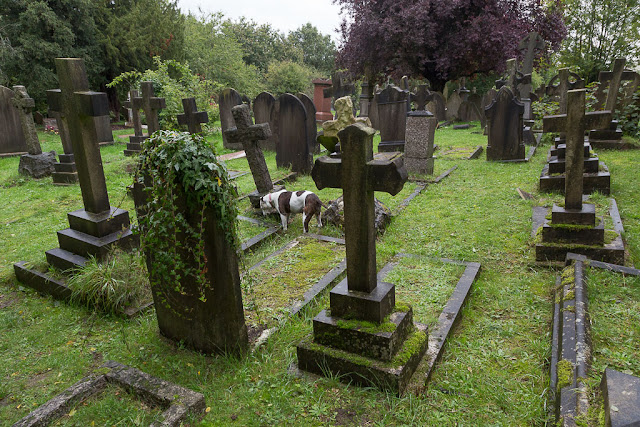 I also took Olga to the cemetery when we had a break in the persistent rain. Here she is having a little nibble of some grass -- her salad, as I like to call it.

It's funny -- when we walk around the cemetery, I often don't even think about the fact that it IS a cemetery.  (Even with that profusion of crosses!) I think of it more like a park. I'm too busy looking at all the stuff that's alive to remember what's not. That would probably annoy some people.

Dave, Olga and I are taking off this afternoon on a little overnight adventure -- although it's another rainy day so the weather isn't optimal. I've kept it secret from Dave so he doesn't know what we're doing and I can't yet write about it here. I'll fill you all in tomorrow!
Posted by Steve Reed at 7:22 AM