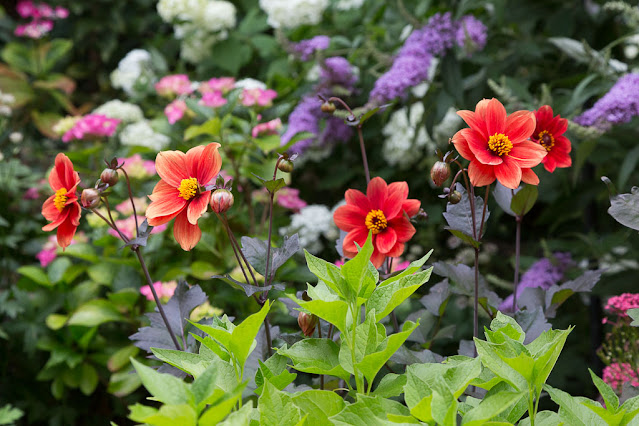 The dahlias on the patio have finally burst into bloom, and don't they look good against the buddleia and the hydrangeas?

We had a pretty placid day around here yesterday. I went to the grocery store, and I walked Olga in the cemetery. It was intermittently gray and rainy, but in true British fashion, people were courageously attempting to barbecue at Fortune Green. (And I'm not complaining about rain because we still need more.) I read magazines. I Skyped with my stepmother in Florida.

You may remember that I mentioned my college friend Suzanne in my post a few days ago, about the book "Death Blew Out the Match." Well, I sent Suzanne that post, and we had a little exchange of texts, laughing about that book. We tried to remember exactly when we bought it, and Suzanne asked if it was at the same time that I got, as she put it, the "wet cat painting."

I had forgotten about this cat painting, which was legendary among some of my friends and also known as the "possessed cat." I bought it at a Goodwill and hung it in my college apartment, where it was the subject of much ridicule. I looked in my old photos and found a picture of it, hanging in my dining room in 1988: 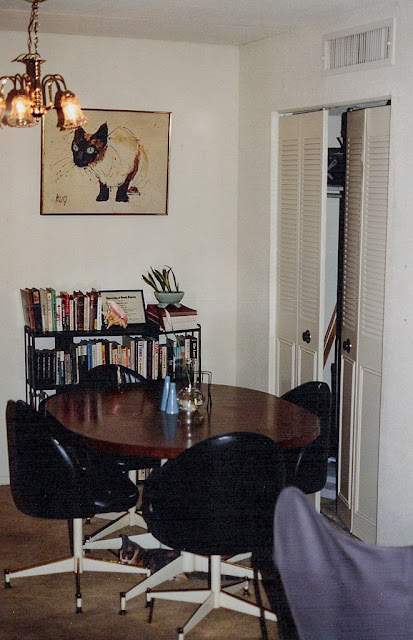 (You can also see my own cat at the time, a calico named Howard, lying under the table.)

Here's a close-up of the painting: 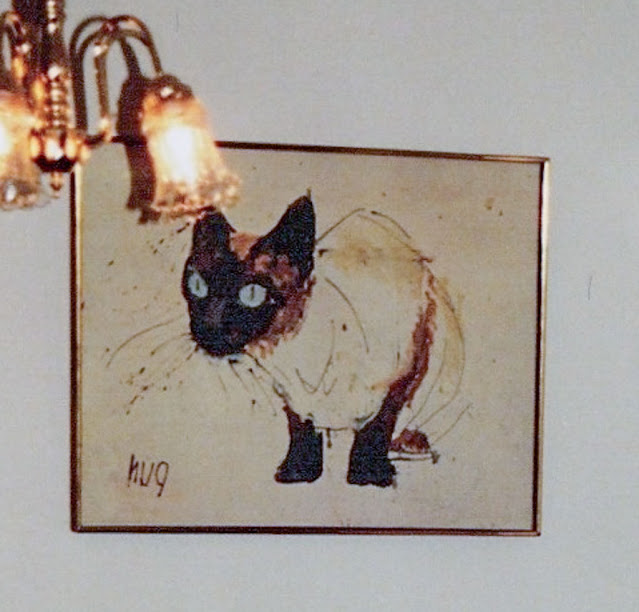 It was a commercially produced, store-bought piece of art -- something you'd pick up at Sears or Montgomery Ward for about $25. In other words, not at all original. I wondered if I could get any information about it by Googling it.

So I uploaded the image to Google, and sure enough, there are a bunch of other pictures of the same painting online. Turns out it's by a Swiss artist named Fritz Rudolf Hug, who apparently was known for his impressionist paintings of wild animals. There's even one for sale on eBay, if you don't mind spending $900 -- yes, NINE HUNDRED DOLLARS. (Someone clearly doesn't know the difference between department store sofa art and an original painting. Unless they really are selling the original painting, which I doubt.)

Coincidentally, Hug died in 1989, not long after I took the pictures above.

Anyway, it was a fun trip down memory lane, and once again I marvel at the information available online. I would have loved to be able to Google this painting years ago, when I bought it, and learn more about it. The Internet, used correctly, really can make us all smarter and more aware!

As for the painting, I kept it for several years, and eventually gave it back to Goodwill, where hopefully it moved on to another good home.
Posted by Steve Reed at 8:02 AM

You are right about the internet and googling. It really is a marvel. Used intelligently - often with tangential thinking - you can find out just about anything. As an aside, what a great bloke Jimmy Wales is - to have had the vision of Wikipedia - and to see it through. It's amazing how rapidly information is updated in Wikipedia.

P.S. Love your retro cat. Clearly you had quirky tastes back then too.

I would love that cat on my wall its lovely.
yes, the internet is wonderful for most things, I would have to troll down to the Library and go through books to find info in the past.
Briony
x

I've seen that painting MANY times over the years. And I would have given your grief about it, as well. But what a great story!

Old men wallowing in nostalgia. Love it. Nonetheless, it is rather cool work of art. Perhaps a pity you didn't keep it.

Possessed cat indeed. I remember those types of paintings. I'm glad that era has passed.

I enjoyed reading your post. It is indeed amazing how the internet has changed all of our lives. And when you mentioned Montgomery Ward...I had totally forgotten about that store!

I kind of like the cat painting, but I can see where it might be alarming if you were, say, tired or intoxicated. Ha!

That is a wonderful walk down memory lane. Lovely that you could piece together the history of that painting.

what a fun story. so many little things in our lives make good stories if we could just remember them. I had my own little blast from the past yesterday when I got an email from a woman I haven't seen or heard from since I was about 23.

One painting with a long story. Yes, my wife has one of those paintings in the living room and it's just awful.

I didn't even know you could upload photos to Google for a search. I'm going to try that. What a fun story about the painting. I bet the whole thing brought back lots of great memories. Those flowers are gorgeous.

That cat really has it.. movement and stillness in one.

I have four of Hug’s paintings and love them.i lost two along the way.i got mine in the early 1970s and of course they are just prints.you are the first person I have run across that had one and I love that cat.also thank you for finding Hug as I had no luck when I tried.

Pretty sure that I would have left that picture in the shop , at the time...but now i think it is kind of cool, expressive and kitschy commercial. I kind of love it! Thank you for digging that one out !

I rather like the cat painting too. Too bad you didn't hang on to it. I didn't realize you could upload photos to Google to find information about them. Hmmm, I'll have to look into that. I'm curious. Enjoy your day, hugs, Edna B.

I like that painting! I've seen it off and on over the years. I think the artist captured the way cats look.

Well, I see absolutely no reason that ridicule was heaped on that painting. I think it's great. 'Course I love cats.

I'm with Catalyst, and for the same reason :)

When Wikipedia became prevalent, I warned my research classes of 8th graders of its sometimes inaccurate/misleading information and to not use it as a source, only basic information.

Ha!! Since retiring in 2008, I have both used Wikipedia numerous times a day and made a donation each year. I am a trivia junkie, and I love finding out bits of information about people, places, creatures, diseases, flowers, etc. I am amazed at the vast, vast amounts of information, much with numerous citations to scientific works. It is an amazing tool for finding out almost anything about anything!!!

You know, I think I had that very same bookshelf in the 80s. Was it black metal shelves with a thin gold frame?

YP: Wikipedia has its flaws, but it IS amazing how it's taken over from all the other encyclopedia publishers. Who buys a Britannica now?

Briony: Remember that? When I was a reporter I'd sometimes have to call the reference desk at the local library to get them to look something up for me. Unthinkable now!

Mitchell: Funny that you've seen it! I guess it's more famous than I knew!

Andrew: I got my use out of it. No need to hang on to it forever!

Michael: I bought some of the furnishings for my first apartment there!

Bug: It does have what could be perceived as an aggressive stance!

Robin: The Internet IS amazing.

Ellen: Wow! That's pretty amazing! Hopefully she's someone you WANT to hear from.

Red: Ha! Sofa art is designed to cover a blank space on the wall and not be too offensive. Hence, it's mostly just bland and thus mildly bad.

Sharon: YES! This is one of the best Internet tricks I've learned. Go to the Google home page, click on "images" at upper right, and then click on the camera icon in the search bar. You'll get an option to paste an image URL or, if it's on your computer, to upload an image. It then automatically finds visually similar images, and it's very accurate! It's a good way to find out whether someone's using your pictures without authorization.

GZ: It does capture the essence of "cat," doesn't it?

Lini: Cool! I'm glad I could help out! Before this, I always thought HUG was the initials of the artist, not the last name. Seems like his heyday was in the early '70s.

Linda Sue: I know, now that I look at it, I wonder why people gave me such a hard time about it. I think it's kind of cool, too.

Edna: Yes! See my response to Sharon above to find out how to do it.

Allison: He definitely did! You can see the tension in the cat, and that's just how they sit when they're apprehensive. (Which is pretty much always.)

Catalyst: I don't quite get it either. Except college kids make fun of everything.

BethB: We always advise students not to use Wikipedia as a citable source, but to use it as a starting point and then follow up the references to get authoritative sources they can cite. Wikipedia used to be much less reliable than it is now. They've added enough safeguards and editing protocols that it's no longer as easy to throw inaccurate or biased information into an entry.

37P: Funny! It was a black metal bookshelf -- it may have originally had a gold frame, but I painted the whole thing black. I bought it at a thrift shop (of course) and the top shelf was slightly bent, which left the books a bit lopsided. Ha!

I don't know when it was that I first saw the cat -- maybe even the late '50s early '60s in some neighbor's house. By the '70s, it was one of those familiar works -- like the kids with the gigantic sad eyes or the dogs playing cards. It was also a popular dorm room and hippy piece of art in the early '70s.