Hurry Up and Sleep 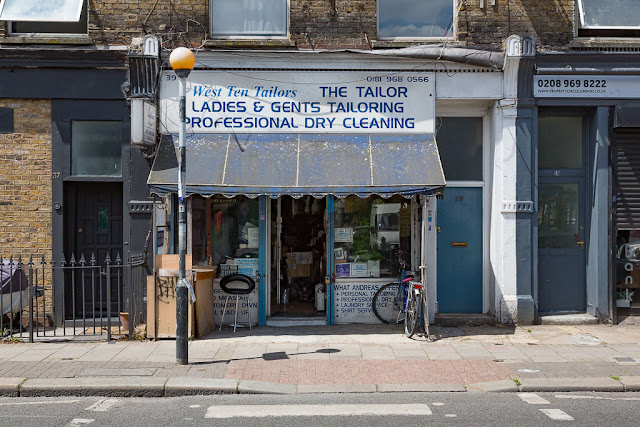 We're at that time of year when my sleep is suffering -- the daylight comes so early and departs so late. Sunrise this morning was at 4:43 a.m., and sunset is 9:21 p.m. Every year I mention this and people say, "You should get some heavy blackout drapes." And I say, "Yeah, that's a good idea." And then I don't do it.

I'm not sure it would bother me, except that the dog goes on RED ALERT as soon as she sees daylight. She basically lies in bed and stares at us, and if either of us so much as twitches her tail begins frantically thumping the mattress. Which, of course, makes us open our eyes, which leads to more frantic thumping. She just can't wait to get out of bed and come out to the living room so that she can do this: 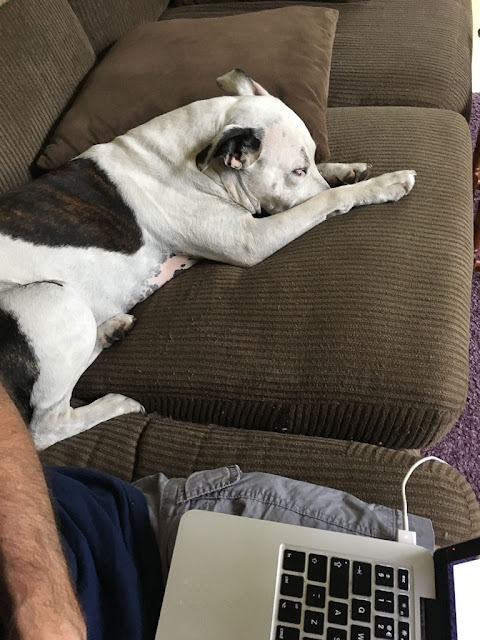 That's her next to me right now. Snoring.

We've put her on glucosamine supplements for her joints, and it seems to have helped a lot. She hasn't been reluctant to go on her morning walks, as she was for a while. Of course, the weather's better now too, so that might be a factor.

You know how every year around this time I get stressed out about renewing the lease for our flat? Well, this year is turning out to be even more interesting than usual. Our lease expires in early July, and although the managing agent asked us months ago if we wanted to renew (and we said yes), we've heard nothing since. I wrote on Monday and asked what was up, and the agent said they haven't been able to get a response from the landlords about renewing. They suggested I write the landlords directly, and I did so, but I haven't had a response either. So we don't know what is going on. Normally I'd suspect they were traveling, but that seems unlikely at the moment.

Apparently even without a lease we'd need three months' notice before being forced to move, under new protections for renters during the coronavirus epidemic. So that's something. But I'd much rather have a lease and know we're settled for another year.

I just can't read our landlords. When they visited in January they seemed so comfortable about our staying. "It should feel like your home," one of them told me, and we discussed several improvements to the property. But they've also behaved a bit oddly in recent years, asking for a clause in the lease that would allow them to break it early, and coming for that inspection.

So who knows. Dave and I are resigned to the possibility that we may be asked to move. We'd hate to leave our garden -- where we've invested so much time and effort -- but many of our plants are in pots and could come with us. And honestly, moving would solve some problems. We could finally ditch our antiquated bathrooms and kitchen, not to mention Mrs. Kravitz! 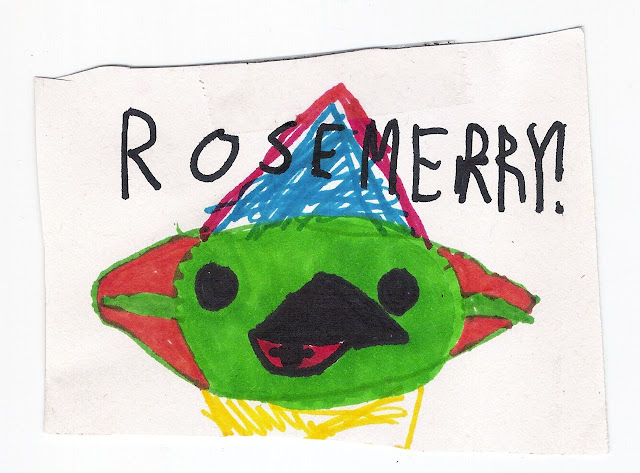 Speaking of plants, I found this tag on my walk Monday, attached to a plant box discarded in the street near Queen's Park. The nursery label on the box said "basil," but let's assume it really did contain "rosemerry!" Perhaps it was a gift from a child. What is that creature? A parrot?
Posted by Steve Reed at 6:57 AM