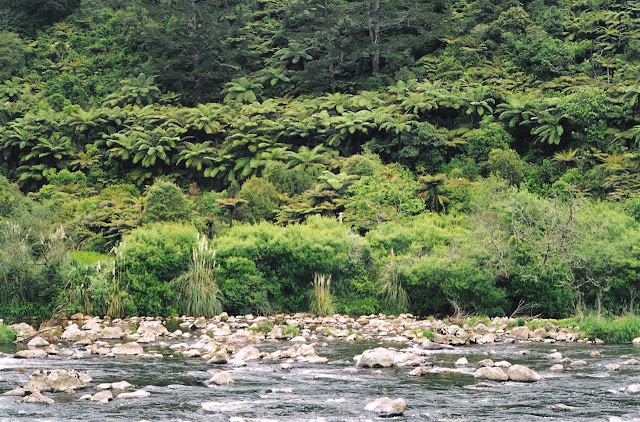 It poured rain yesterday and it rained all night, too. The garden is sighing with relief! And I know Dave's new precipitation-loving tree fern is probably very happy.

Speaking of which, here's a photo I took in November 2004 in New Zealand, showing tree ferns growing in the wild. Aren't they beautiful? Like little palm trees. This was a park on the North Island, somewhere north of Waihi. When I bought Dave's fern I got to thinking about the photo, and I wanted to show it to Dave, so I dug it out of my "archives."

From my trip journal at the time: "Stopped at Waihi Beach and an old gold-mining town where I saw a parrot called an Eastern Rosella burst up through the tree ferns in a flash of color."

Here in London, the rain was so intense yesterday afternoon -- we had thunder and a little bit of hail, even -- that I cancelled Olga's dog walk. She stayed inside on the couch. I think we'll send her out today, now that we're having a steadier rain without the sound and light show. It won't kill her to get wet.

Fortunately, I'd already taken her on a long walk in the morning. We went to the cemetery, where we found... ...wildlife cameras set up along several of the paths. They're part of a London Zoological Society survey of hedgehogs, called the "London Hog Watch." I didn't know hedgehogs were even present in our part of London, but the survey's twitter feed has nighttime videos of them near Hampstead Heath, so that's exciting! I'd be surprised if any are in the cemetery, though, given how many dogs walk there. (Of course, the same could be said about the Heath. Maybe hedgehogs are more enterprising than I think.)

In other news, Oxford University is finally moving to take down a statue of Cecil Rhodes on the front of one of its buildings. That's a good decision. I agree with one of the local politicians who said it should go into a museum, where it can serve as a discussion point in larger conversations about apartheid and racism. I wish that had happened with Bristol's statue of Edward Colston, instead of its being torn down and thrown into the River Avon -- although apparently the city has retrieved it and it may eventually be museum-bound. To my mind, simply destroying these objects is an erasure of the past, and dishonors the victims of racist crimes as well as the perpetrators. Removing but preserving the statues helps us consider the fact that these men were once held in high regard, and ponder what that says about society at the time and how it is changing.

(I wonder if the Rhodes Scholarship program will also change its name?)

There are some imperialist paintings in Parliament that are also the subject of a similar discussion, and I hope they meet the same fate. (Removal but preservation.)

You've probably seen on the news that London's mayor has covered statues in Parliament Square -- including Winston Churchill, Nelson Mandela and Gandhi -- with sheet metal to protect them from protesters on both the right and the left. Right-wingers are particularly concerned that the Churchill statue will be torn down, and held a violent, alcohol-fueled demonstration around it on Saturday. Churchill is several orders of magnitude above Edward Colston in terms of national importance, and he also seems less personally complicit in the brutalities engaged in by Rhodes and Colston, so I doubt that statue will come down anytime soon. (Nor should it, in my opinion, although I'm certainly not allied with the right-wing demonstrators either.)

These symbols are very potent, aren't they? Like the Confederate monuments in the American South. I'm glad we're re-evaluating their place in modern society.
Posted by Steve Reed at 7:19 AM