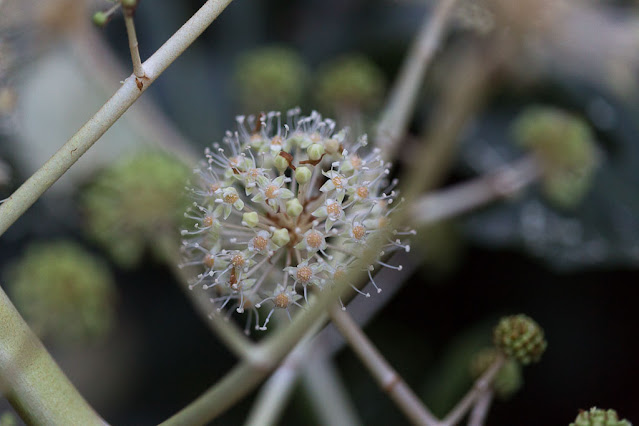 This is the flower of a Fatsia japonica growing at the back of our garden. Dave bought it several years ago and we weren't immediately sure what to do with it -- it lived in a pot for its first year but started looking yellow and peaked so, in desperation, we stuck it in the ground back by the shed. It has flourished there and now it's blooming up a storm.

The blossom reminds me of buttonbush, a wildflower from my home state of Florida. They used to grow wild at the lakefront where I grew up, and my brother and I called them "Sputniks." These are the English version, I guess. (Or Japanese, by way of England. Our globalized world!)

Yesterday was pretty quiet, for a change. I got a bunch of stuff done that's been on the back burner -- I finished another Newbery book, wrote my review and worked on some reading lists for the kids. The Newbery was called "Up a Road Slowly," from 1967, and I thought it was just OK, although some people on Goodreads have called it one of their favorites. It was written in a weirdly formal style and was vague in its setting, both time and place, which bugged me. 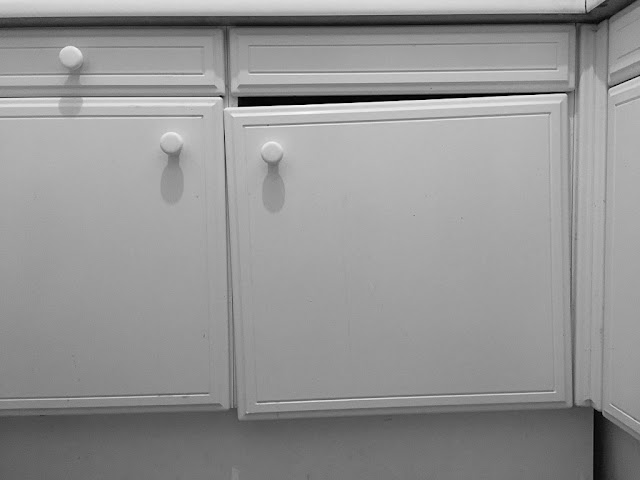 Here's our latest domestic conundrum. The cabinet door below our kitchen sink is sagging like crazy. It looks like it should be an easy fix, right? But it's not just a matter of tightening a screw -- there's something wrong with the hinge. I think it needs to be removed and re-anchored in the cabinet wall. It seems ridiculous to have to call a handyman, but both Dave and I have looked at it and we don't really know what to do. I may get in there this weekend with some Gorilla Glue and see if that solves the problem.
When in doubt, use Gorilla Glue. That's my motto.
Posted by Steve Reed at 6:37 AM