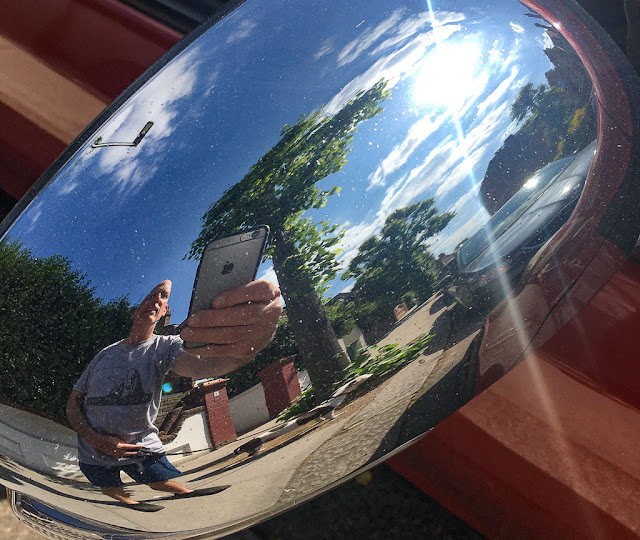 This very shiny car mirror seemed to make a good photo opportunity. Can you see Olga, standing at the base of what looks like a baobab tree? Obviously she's not really that long -- the reflection has turned her into a dachshund.

We had some excitement yesterday. Dave came home in the afternoon to find no running water. Our upstairs neighbor said it had been off since about 9 a.m. She said she'd called, but just to be on safe side we called too.

We had a pretty good idea what was going on. Remember the water main replacement project on our street? Well, the construction is done and we got a letter a few days ago saying they'd begin testing the new pipes on Monday. "You shouldn't notice any changes," it continued, "but if your water unexpectedly goes off at the time of testing or after, please call us immediately."

So Dave called, and reached someone who seemed completely unaware of any testing or indeed repairs on our street, and who insisted no one else had contacted them. He filed a work order and we waited. A few hours later, when no one from Thames Water had shown up, we called again. Turned out the work order got cancelled by the computer because it showed work crews were already on our street doing pipe replacement. Argh! So we went through the process again.

We ordered a takeaway chicken dinner and waited some more. I desperately wanted to water some of our plants, sagging from the heat, but the only water in the house was in Olga's dog bowl and I didn't want to deprive her of it. We don't even have accessible toilet tanks! I went around and talked to a couple of neighbors, who all had water. In fact, one woman was watering her front garden, just to rub it in. (She offered to give us some if I brought her a bucket, but I didn't have one handy and opted to wait.)

We called a third time, around 8 p.m. I got a little frustrated with Dave, who was very calm and acquiescent on the phone. I told him he needed to be more firm and direct. (Dave insisted on taking care of this situation himself -- he gets tired of me taking charge. I tried to pipe down and let him do his thing his way.)

Finally, after dark, a Thames Water engineer showed up and explained that the work crews completely missed connecting our house to the new main -- apparently we don't have a street valve controlling water supply to the building, and that's what they used to make the connections. So they simply skipped us. When they turned off the old main, they turned off our water. There are a few other houses on the street in the same position, he said. (He was also plenty annoyed at being called out because another work crew hadn't done their job properly, as he said.)

To make a long story short, they turned the old main back on, and our water returned at about 10 p.m. I guess a crew will come back around, dig up the street again and install a new connection to our house. 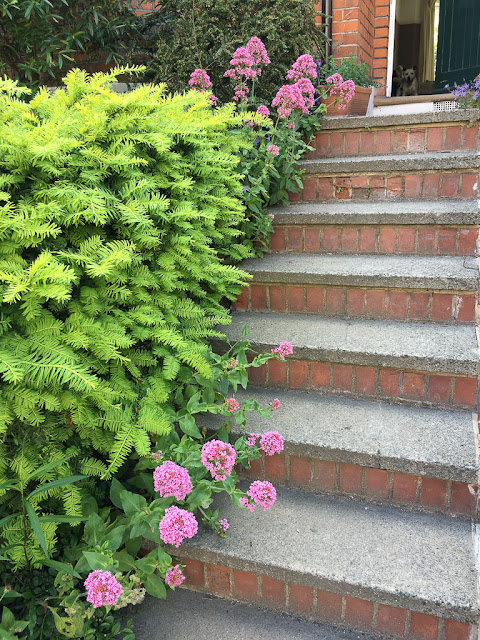 Here's the valerian growing on our front steps. I always like this hardy flower when it appears every year. Can you see Olga, watching me from the open doorway? She's saying, "I'm thirsty!"
Posted by Steve Reed at 6:52 AM