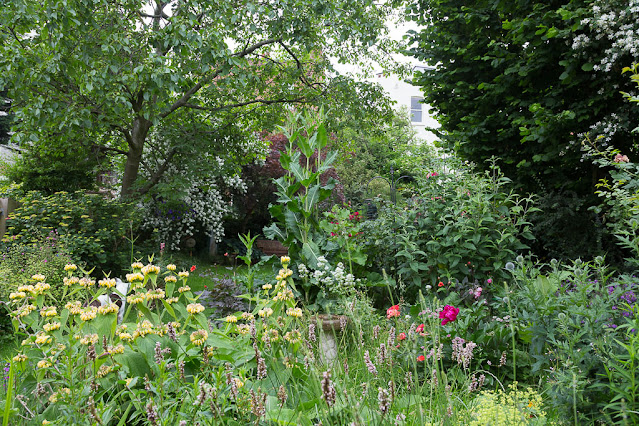 I bring you a report on the state of the garden. Here's the view out the back door, where the pink persicarias have faded and the yellow phlomis has arisen in their place. Compare the scene to this video, which I shot in April, and you can see how dense the growth has become. 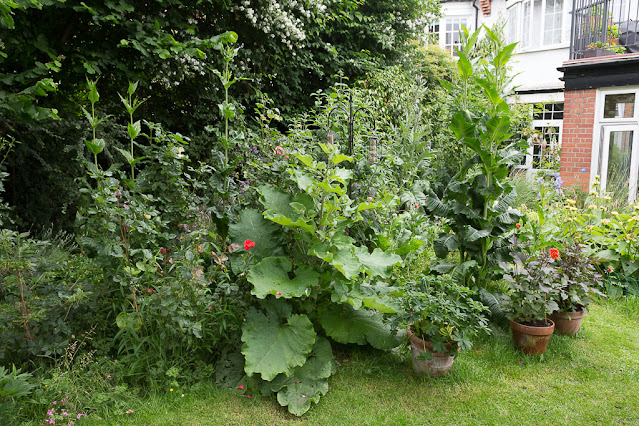 Here's the area around the birdbath, which looks like the prehistoric lair of a small dinosaur. Can't you just imagine it poking its head out of that tangle of green? The teasels -- three on the left, three bunched together on the right -- are towering and preparing to bloom, and the burdock in the center has reached an insane size. 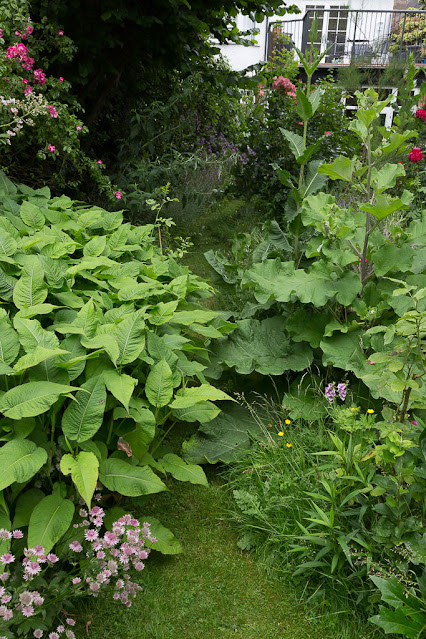 I mowed the lawn yesterday, and I can barely squeeze the mower through this area, with red persicaria on the left and another giant burdock and, beyond that, a teasel on the right. 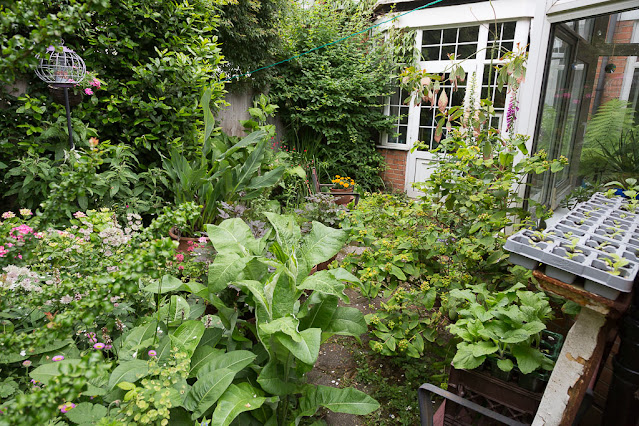 The growth is just as dense on and around the patio -- which is under there somewhere. That gigantic inula in the foreground grew there of its own accord. It comes up every year and I don't have the heart to kill it, but it is in a rather inconvenient place. My foxglove seedlings are on the right. I need to do something with those. 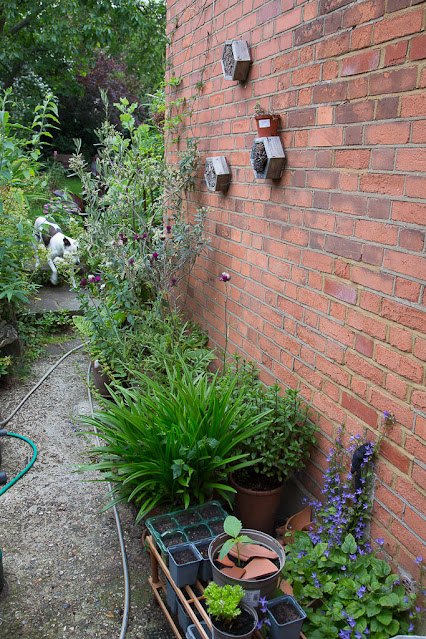 Remember that set of garden shelves we bought -- the "plant ladder"? Well, it's a badly designed, badly built piece of junk. Within weeks it began falling apart, some of the shelves collapsed, and it got so bad I was afraid to put pots on it because of the weight. The screws holding the shelves together are so flimsy they've snapped in several places. We decided to throw it out. So the side of the house, which is our sunniest spot, is once again free from furniture and honestly I think it looks much better that way.

(Well, except the small shelves in the foreground, which are holding pots of jimsonweed (datura) seeds. Only one of those seeds sprouted, and you can see it growing in the grey pot surrounded by pottery shards to keep the squirrels at bay. We also have a lettuce plant there that Dave bought at the grocery store -- I've never seen lettuce sold with the root ball attached, but we planted this one after we ate the leaves and it's giving us another harvest!) 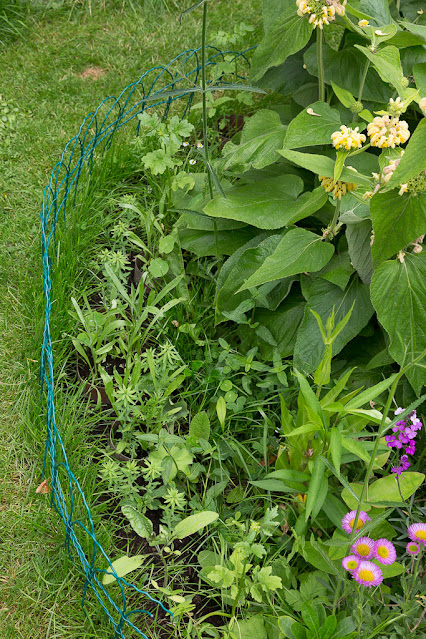 Here's the little wildflower garden, where the seeds I planted have grown to a respectable size. (Some of them, anyway. I don't think any of the cornflowers made it -- the slugs liked them too much.) 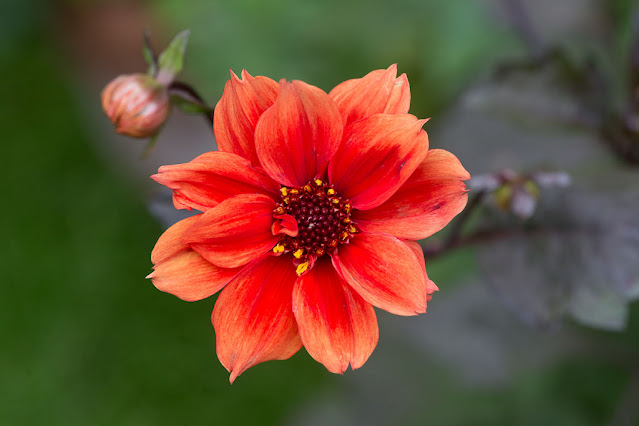 Our first dahlias are beginning to bloom! 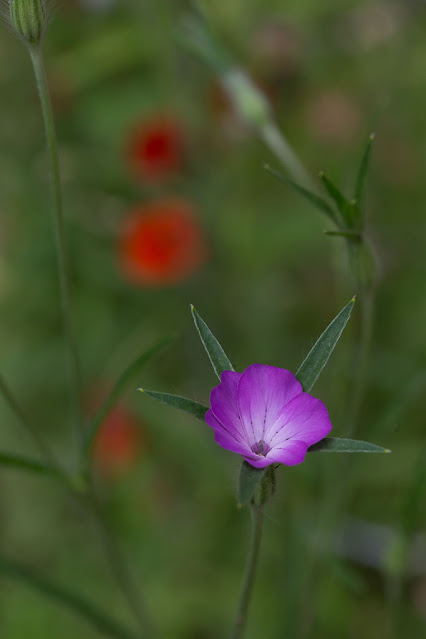 And finally, the corncockle, which you may remember I grew from seed, is several feet high and producing flowers of its own. Success!

When reading your gardening posts, I am surprised how many plants you mention I have never heard of, in spite of us embracing English gardens in the past. Btw, I enjoyed your holiday posts. Good that you could take Olga with you.

Your garden looks great. Don't get lost in it !
Do you watch Gardeners' World? You could do one of those short films that people make of their own gardens. You are very knowledgeable about plants.

To me, your garden is how a garden should be, just beautiful, I love it.
Briony
x

You and your gardens are a wonder. It’s paradise. You need to knock down the fence between you and Mrs. Kravitz and spread out. Oh, on second thought, never mind.

It's the new Garden of Eden! Forget dinosaurs... I expect to see Adam and Eve appearing in their birthday suits. I wonder what Mama Kravitz thinks of your verdant oasis...

Looks wonderful. We did a count of how many different flowers ('weeds' such as clover in the lawn included) are out in our garden at the moment, and were surprised to get to nearly 50. Yours looks similar.

Your garden looks beautiful and lush. It sounds like you guys enjoyed your trip away to the Isle of Wight. I enjoyed the photos.

Everything looks wonderful, Steve! A paradise on earth!

Your backyard and garden look wonderful. I just love the dahlia! It looks like you just painted it on top of the stem. Beautiful! You have a super day, hugs, Edna B.

A true work of love.

I LOVE YOUR GARDEN! (Sorry, got carried away.) I did NOT know you could plant that lettuce! We get it that way all the time in our Misfits Markets boxes. I'm going to plant the next one!

I love your garden. so nice to have temperate weather all year. so many wonderful things blooming and growing.

What a gorgeous spot. It makes me smile just looking at the pictures!

You have a garden that Arizonans can only dream of. Absolutely beautiful.

It's weird how the ice and snow come your way and everything live through it and if they don't they will still return lush and lovely. I had good luck after the big 150 year freeze we had and the majority of my plants came back as they were before. Your plants just grow up very fast. How do you do it? I think your climate is much better than ours as far as the temps. Our temps are just too hot and I know most plants live better in cool weather instead of hot. Give Olga a pat on the head for me and tell Dave hi and continue resting from the trip. I think you Steve is made of sterner stuff. You can walk for miles and still breathe. (laughing) I would have to be on oxygen and probably still couldn't do it.

Your garden is beautiful. I probably could just sit there for an hour taking it all in!

Dang, the plant ladder looked brilliant when you got it- I thought about getting one and then forgot- thank you poor memory! The deer would LOVE your garden!

Doesn't take long for Mother Nature to take over the scene (although you are doing a pretty good job of keeping her from getting outrageous with your plantings). All you have to do around here is see how fast the kudzu takes over whole acres of uncultivated land and climbs and covers trees in a heartbeat.

Well, you must be doing something right because it sure looks terrific. I was amazed at the difference in that bird bath spot in the video! Well done!

Everything is growing beautifully. My backyard is under water, but the plants and flowers in pots are happy.

You have a lush pleasant garden. It takes lots of work to set things up and maintain them.

I sent this post over to my wife and told her to be reminded of plant growth in her native Indiana back in the day. Your garden (jungle) is absolutely spectacular, Steve and Dave.

I wonder if you have the plants but know them by a different name?

We've thought about doing one of those videos! I'm not sure what we'd say, though!

Thank you! We like things a little wild. (A fox just walked by the window as I was typing this post!)

Ha! Ironically, the fence IS down today, being repaired.

I expect she thinks we let it get out of control. And maybe we do.

I don't doubt it! I bet we'd get to a similar number. We have some clover and the bees love it!

Glad you liked them! We had a great time but it's good to be home.

Thanks, J -- coming from a fellow gardener!

I like these dahlias too -- we grew them from seed. They've been a pleasant experience every year!

Indeed, love and heartbreak and joy!

Absolutely! If it's got roots attached just put it in dirt and you'll have more lettuce! Good luck!

We really are lucky to be in a perfect "zone" weather-wise. Not too hot, and not too cold.

Good! Glad to extend the garden's benefits out into the world!

Yeah, but y'all do have some amazing gardens there, too -- just with very different plants!

Some of the annuals and biennials grow VERY fast. It's just what they're designed to do -- get to full size in a single season (or two). Even when it's cold here, it's never extremely cold. It's not like the Midwest with sub-zero temperatures.

It seemed like a good idea at the time. But aside from the crappy construction, the shelves didn't allow enough height to accommodate plants. It just didn't work well at all.

We try to keep her reigned in just enough! The area in the far back of the garden is basically uncontrolled, though, and there are lots of vines up in those trees. (Not kudzu!)

The big differences there are the teasels, the burdock and the buddleia, the shrub just to the right of the feeders, which we prune way down every spring and which bounces back to bloom in the summer. Oh, and we prune the roses down too, but they've regrown now.

We enjoy it! Nature is responsible for a lot of the luxuriousness -- if you plant things native to your part of the world, they know what to do naturally, and we've done that in several cases here.

Yikes! It sounds like you need better drainage! Though I know Florida in the summer can get pretty boggy. Our back yard used to fill with standing water when I was growing up there.

We enjoy it so much, and it gives us a productive way to spend our time!

Thank you! I hope SWMBO enjoyed the pictures too! :)

Oh, I WISH we owned this flat. No, we rent it. There's no way we could afford to buy this property in London.

I am sure that you could think of something.....the people who do the videos of their gardens just basically chat about the plants and why they like them, and what the garden means to them. I would be so thrilled to see your garden ( and you) on Gardeners World.

My yard doesn't have a spot to put in a drainage system so I do the best I can with a pump and hose running out to the street. My neighborhood has had drainage improvements made, but it's still watery.

Oh, she was enraptured!