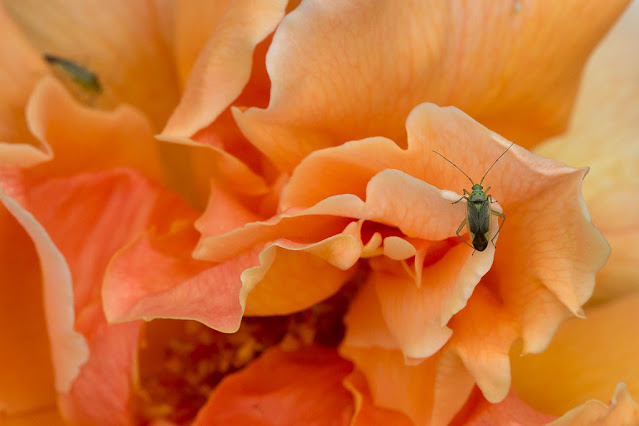 When I was at the cemetery with Olga on Sunday, I saw these little flower bugs crawling around on a salmon-colored rose. And then, back home again... 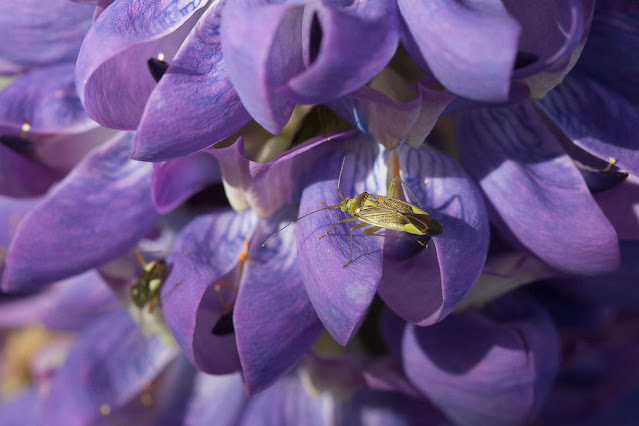 ...I saw what looks like the same kind of bug on our lupine.

I had no idea what these critters were, so I did some digging. I've concluded that they're Closterotomus trivialis, a relatively recent arrival in England from the Mediterranean. Apparently they're a serious pest for olive and citrus growers, although they primarily eat nettles. I'm not clear on whether they're a problem for our plants, but for now, I'm letting them be. At least they make nice pictures!

In other garden news... 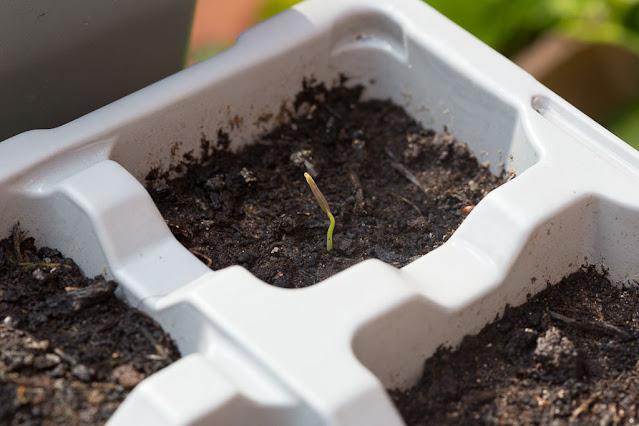 ...one of my jimsonweed seeds has finally sprouted. Nothing from any of the others yet. But I might wind up with at least one plant, fingers crossed.

My wildflower seedlings have not fared as well. I noticed this morning that they'd been ravaged by slugs. I found a few tiny slugs still on them and picked them off, but it may be too little too late. Honestly, if a wildflower can't prosper in the wild, what good is it?

I also noticed something ate one of my zinnia seedlings. That's not so terrible, though -- even though I thinned them (ugh!) there are still too many in the pot. Nature could stand to cull a few. 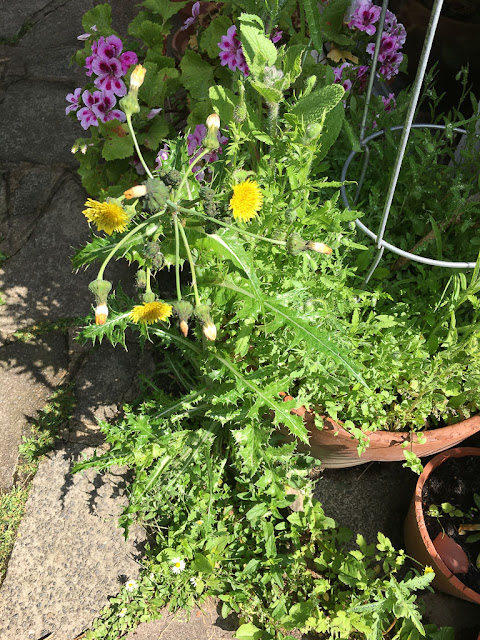 Finally, this is a bit hard to see, but that thistly-looking plant sprouted and grew from a crack in the patio next to our pot of poppy seedlings. I let it grow because I was curious about what it would become. Apparently it's called a rough sow thistle, and as you can see it has yellow flowers. In fact, it's a member of the dandelion family. I'm probably going to have to pull it out soon because I don't want it going to seed. According to Wikipedia, it makes a "palatable and nutritious leaf vegetable." Should we try it?

I can see the headlines now:

Yesterday morning I wound up being half an hour late for work, because of course when I stood up from blogging with minutes to spare, the dog also leaped up and expected a walk. I am completely unable to refuse Olga a walk when she's excited to get one. I'm not sure these are healthy priorities, but fortunately no one at work seemed to mind.
Posted by Steve Reed at 6:34 AM