Ticket to the Past 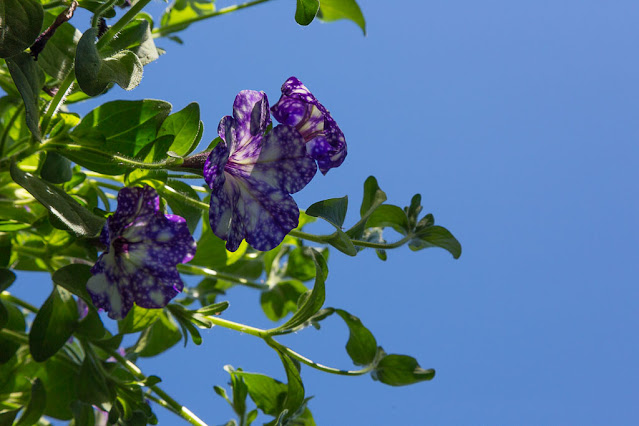 I took this picture of our "Night Sky" petunias mainly to show you how clear and sunny the weather has been. Supposedly that's all going to change tonight. Rain is expected and will continue off and on through the middle of next week. I'm down with that -- it will save me the trouble of having to water the garden. 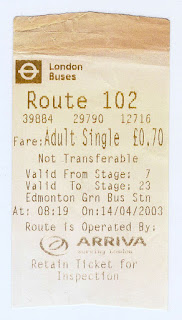 While I was weeding some old books last week in the library's movies and music section, I came across this yellowed ticket stuck between some pages. As you all know, I love finding things in library books. This ticket is from April 14, 2003 -- a Monday -- when someone took a morning trip on the 102 bus through North London. The 102 runs east-west across town from Edmonton (north of Tottenham) to Brent Cross, which is just north of where we live.

It cost only 70 pence to make the trip. A regular adult fare is more than twice that now. And do we even still get paper tickets? I don't, because I just scan my oyster card, but maybe if I paid cash I would. Or could I even still pay cash on a bus? I have no idea. (I tried to look this up on the TFL web site but as you can imagine there's a bewildering array of fare information and ultimately I couldn't be bothered.)

The year 2003 doesn't seem that long ago, but the kids who just graduated as seniors from the school where I work were born in 2003. So that puts it into perspective, right?

I got to wondering what I was doing around that time. I'd been living in New York City for three years, and I was dating a guy named David -- a different David from the one I eventually married. Here's my short journal entry from April 15, 2003, the day after someone rode that bus:

David and I had a great weekend -- took a quick road trip to a little town called Chester in New Jersey and went shopping. We also went to Tony's for a party on Saturday night -- a dinner, really, and a movie about a Venetian courtesan, Veronica somebody.

I remember that trip to Chester. We went there a couple of times; once I bought a little ceramic turtle and once a compartmentalized shadowbox frame, to hold and display knickknacks (like ceramic turtles) -- but I don't remember the dinner or the movie, which frankly sounds pretty awful. (I'm guessing it was this one.)

Anyway, a little blast from the past there, all prompted by a found bus ticket!
Posted by Steve Reed at 6:01 AM