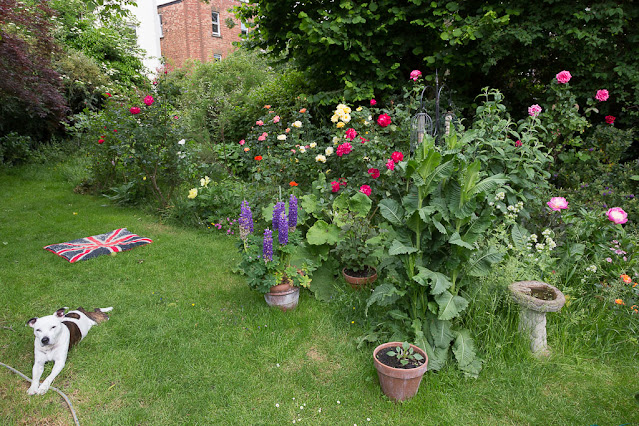 The state of things in the garden right now. As you can see, the roses are going gangbusters, the peonies and lupines are blooming, and the teasels by the bird bath have become gigantic.

Doesn't Olga look comfy on the lawn? I tried to take her to the Heath yesterday morning, and she reacted with excitement to the idea of a walk, but once we got outside she insisted we take only our short walk around the neighborhood. Later in the day, she was excited to walk again, but this time it was all we could do to go down to the high street and back. It was pretty warm (81º F or 27º C) and though the spirit was willing, the body was apparently weak.

I know I've said this before, but I may have to resign myself to the idea that our Heath-walking days are behind us. 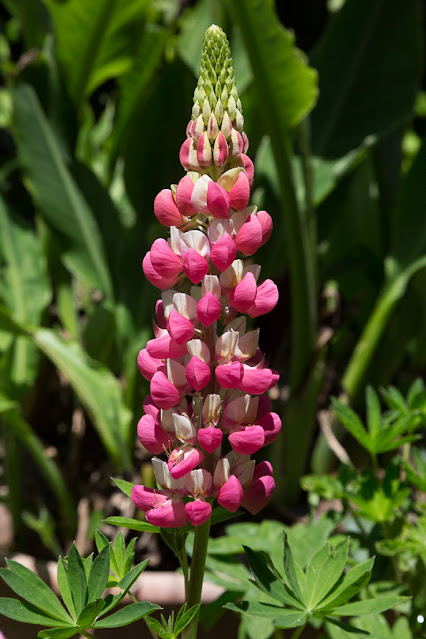 Here's a close-up of our Rachel de Thame lupine, she of the aphid infestation. After killing aphids by hand for a couple of weeks, I've finally been rewarded with a flower. 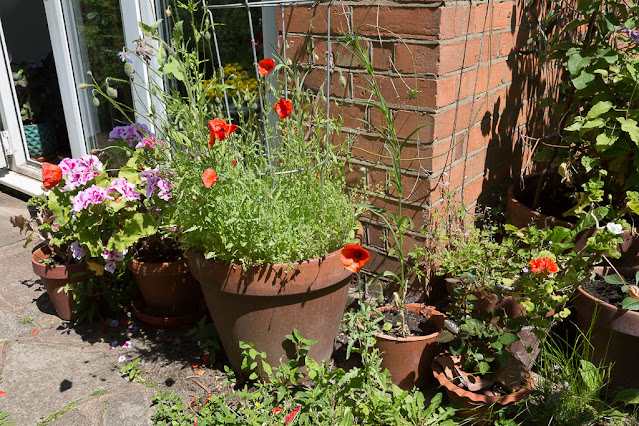 The field poppies in the corner pot are also blooming away. With any luck these will re-seed and come back year after year. 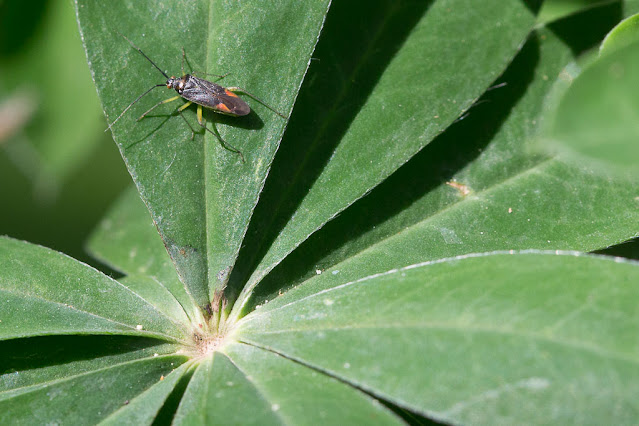 Remember those little green bugs I photographed about a week ago -- the Closterotomus trivialis? Well, I believe this is the male -- he's darker with red spots.

The party around the corner continued unabated yesterday. There was apparently some kind of brunch with more music, speeches and announcements. When Dave and I walked past on the way to the high street, he asked one of the black-uniformed attendants outside (dare I call him a bouncer?) what was going on. He was it was a bat mitzvah for two girls.

Oh God, I thought. I called the cops on someone's bat mitzvah! I really am an evil, evil person. Fortunately I don't think the cops ever showed up. And completely unprompted, the bouncer guy apologized for the noise on Saturday night -- he volunteered that he understood it got quite loud.

Then, last night, it got loud again! I didn't call the cops this time, but there were 13-year-olds singing at the top of their lungs to "Starships" by Nicki Minaj, egged on by an amplified DJ or announcer, at 9 p.m. and things were still going strong at 10:30 when I went to bed. Don't these kids have school? Grumble, grumble, grumble.

Surely, after three days and nights, it must be over by now. Our upstairs neighbors were wondering if the property is being rented as a "party house" -- God forbid. (By the way, I tried to provide you with a 45-second audio sample of what the gathering sounded like from our back garden, but SoundCloud won't let me post the clip because it contains copyrighted music. You'll have to just imagine it.)