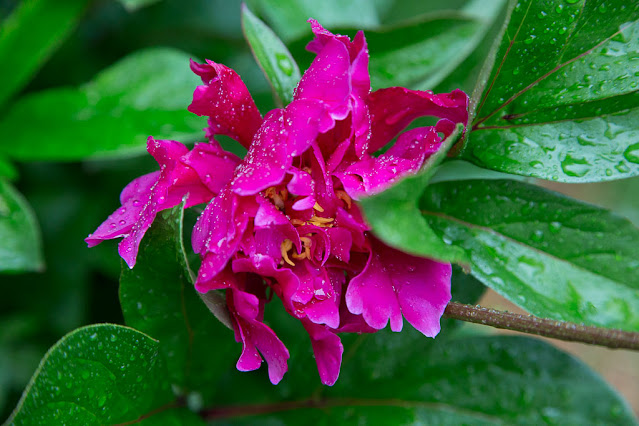 Our third peony has finally opened, and it looks like we'll ultimately get two flowers from this plant. It's especially photogenic in the soft spring rain we've been receiving for the last few days. The other two peonies -- the yellow one and the Bowl of Beauty -- are already finished.

I survived our third end-of-the-year gathering yesterday, and of course once I had a glass or two of champagne it stopped seeming like a bad idea! Today I have very little to do, but I do need to go in just to clear a few final things off my desk, and then we have our final all-school Zoom meeting. I don't think drinking will be involved.

Walking (unsteadily) home from work yesterday, I encountered this guy: 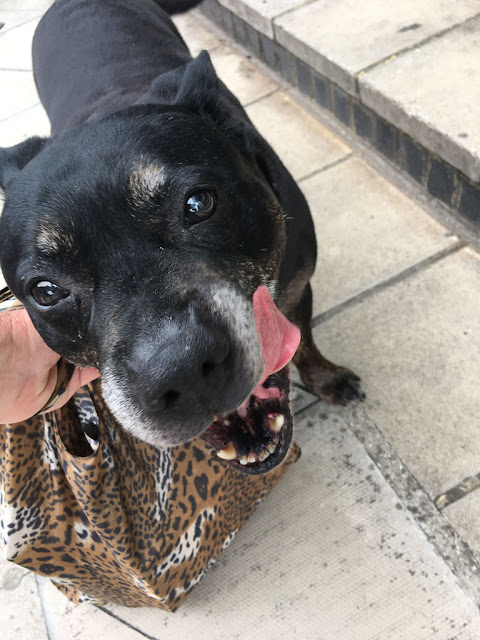 His name is Buster, and though he's pretty old (about 11) he was quite wiggly and it was hard to get him to pose for a picture. He was lying on the sidewalk while his owner, Jerry, sat nearby on the steps of an apartment house, finishing a beer. I kept telling Buster to "stay!" and unlike Olga he paid no heed whatsoever. He appreciated a few scratches. Don't tell Olga I've been unfaithful. 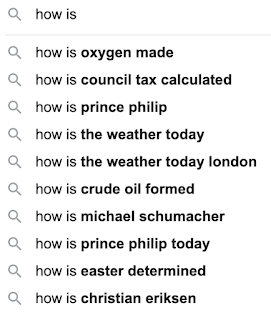 I had to do a Google search yesterday for something -- I can't remember what -- and when I entered the words "how is" into the search field, these were the prompts I got. Clearly they haven't gotten the news about Prince Philip.

I'm wondering how Google comes up with their suggestions. I assume it's based almost entirely on where I live, because clearly readers in the USA wouldn't get prompts about council tax or the weather in London. I would think my own search history might also play a role, but I swear I've never searched for anything involving Michael Schumacher, a German auto racer. I didn't even know his name. (Or that he had a skiing accident years ago that left him comatose.)

When you enter "how is" into the search field, do you get a similar list?

Anyway, the peculiarities of Google never cease to amuse me.
Posted by Steve Reed at 6:36 AM